Over the past 30 days, 640,332 citizens have engaged with Grassfire updates (A NEW GF RECORD)! Get connected here! Go here for more on team activity:

Just after 2:00 p.m. ET today, U.S. Senators are expected to cast two life-or-death votes. The Born-Alive Abortion Survivors Protection Act will make it illegal for medical providers to withhold lifesaving treatment from babies who survive a botched abortion. The Pain-Capable Unborn Child Protection Act would prohibit abortion after 20 weeks, the point in pregnancy when an unborn baby can feel pain.

This morning is your final opportunity to make your voice heard BEFORE the Senate votes -- just a few hours from now. As a signer of the national "End Abortion Now" petition, you've already taken a stand for life. But today, you can increase the impact of your petition, which Grassfire is working to deliver ahead of these important, pro-life votes.

Click here or on the banner below to help stop infanticide and limit abortion by instantly sending your "End Abortion In America" faxes to key Senators now:

Exactly one year ago tomorrow, the United States Senate failed to guarantee lawful protection for babies who are born alive after a botched abortion. The Born-Alive Abortion-Survivors Protection Act (S.311) would have required doctors and nurses to provide life-saving treatment to those newborns.

Republicans needed 60 votes to advance the legislation to the Senate floor for a full vote. But on February 25, 2019, the bill received only 53 "Yea" votes. Only three Democrats joined Republicans to support S.311, and three Republicans didn't vote at all. (Two GOP Senators missed the vote due to flight delays, and "Queen RINO" -- Sen. Lisa Murkowski of Alaska -- was "missing in action.")

Senate Majority Leader Mitch McConnell (R-KY) has called for another vote on S.311, as well as the Pain-Capable Unborn Child Protection Act (S.3275). That bill would prohibit abortion after 20 weeks of pregnancy, which is when a majority of the medical community says unborn babies are capable of feeling pain.

Pro-life Americans need to start praying now (if you haven't already) for a different result tomorrow. If EVERY Republican Senator supports this legislation, along with just seven Democrats, these bills can receive the up-or-down votes they deserve!

Tomorrow, the U.S. Senate will make two life-or-death votes. The Born-Alive Abortion Survivors Protection Act will make it illegal for medical providers to withhold lifesaving treatment from babies who survive a botched abortion. The Pain-Capable Unborn Child Protection Act would prohibit abortion after 20 weeks, the point in pregnancy when an unborn baby can feel pain.

Radical Democrats are trying to paint the important, life-affirming legislation as extreme "anti-abortion" bills. Reasonable Americans know that's not true. Protecting the newly born from infanticide and the preborn from pain should be a no-brainer for Senators, regardless of their party affiliation.

You only have about 24 hours to make your voice heard. As a signer of the national "End Abortion Now" petition, you've already taken a stand for life. But now, before these crucial votes, you can increase the impact of your petition, which Grassfire is working to deliver BEFORE tomorrow's votes.

Click here or on the banner below to help stop infanticide and limit abortion by instantly sending your "End Abortion In America" faxes to key Senators now:

P.S. To learn more about what could be a lifesaving Senate vote tomorrow, please see Saturday's pro-life update below.

Wow! Grassfire Nation did it again! Our team members not only reached the original goal of 10,000 signers for Rush Limbaugh's "Get Well" card, they blew past BOTH of our "stretch goals" for this initiative.

As of 11:30 p.m. ET last night, Grassfire has recorded more than 20,000 signatures from Rush fans, thanking the conservative-radio icon and wishing him a fast and full recovery from lung cancer.

On Monday, we'll start the delivery process and get your signature to the Excellence in Broadcasting (EIB) Network studios in New York City as soon as possible. Until then, you still have about 36 hours left to add your name, too.

Appallingly, Democrats defeated this same anti-infanticide legislation last year, claiming it infringed on the abortion "rights" of women. But that's simply not true. S. 311 would only require doctors and nurses to render aid to newborns who survive an attempted abortion.

Shouldn't Americans of every political affiliation be against letting helpless babies die? Have radical leftists gone so far down evil's path that they're O.K. with infanticide?

Grassfire came across a fun video on Twitter last night that we want to share with you. It's currently posted on the personal account of Dan Scavino, an assistant to President Trump and Director of Social Media at the White House. It features a FOX News interview with an elderly woman who's a big fan of our Commander-in-Chief. Click here or on the image below to watch it now: 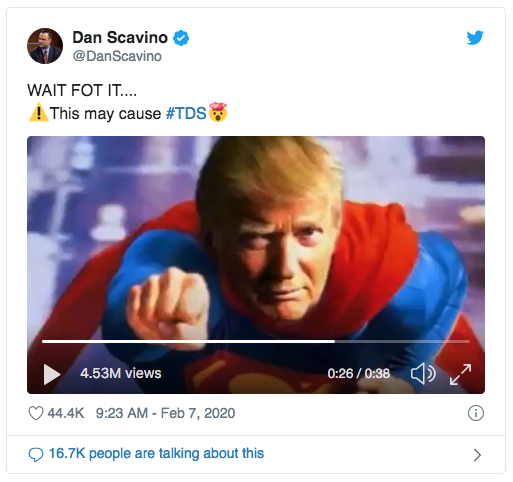 UPDATE: An even more shocking response to Rush!

In yesterday's email (see here), we told you about the shocking response Grassfire has received to Rush Limbaugh's "Get Well" card. It was all great news since we launched this initiative 10 days ago -- that is, until yesterday.

You see, our staff was even more shocked by the response we received after tweeting about the card. In an effort to reach our new stretch goal of 20,000 signatures, Grassfire paid Twitter to promote a post inviting people to add their names.

Members of the "tolerant" Left didn't hold back, revealing the worst of the social-media site, which can become a "cesspool" in 280 characters or less. Here are a few of the negative comments posted after asking people to thank Rush and wish him a fast, full recovery from lung cancer:

To be honest, Grassfire is shocked by the response to our "Get Well" card for Rush Limbaugh. After learning about his "advanced lung cancer" earlier this month, we knew we had to do something for the conservative-radio icon.

The Grassfire team thought 10,000 signatures was a great goal, but some staffers wondered if we were aiming too high. Nope. We reached that goal in just four days.

"How about 15,000?" we asked. "Would that many team members be willing to sign a 'Get Well' card for Rush?" Yup. We blew past that "stretch goal" on Tuesday.