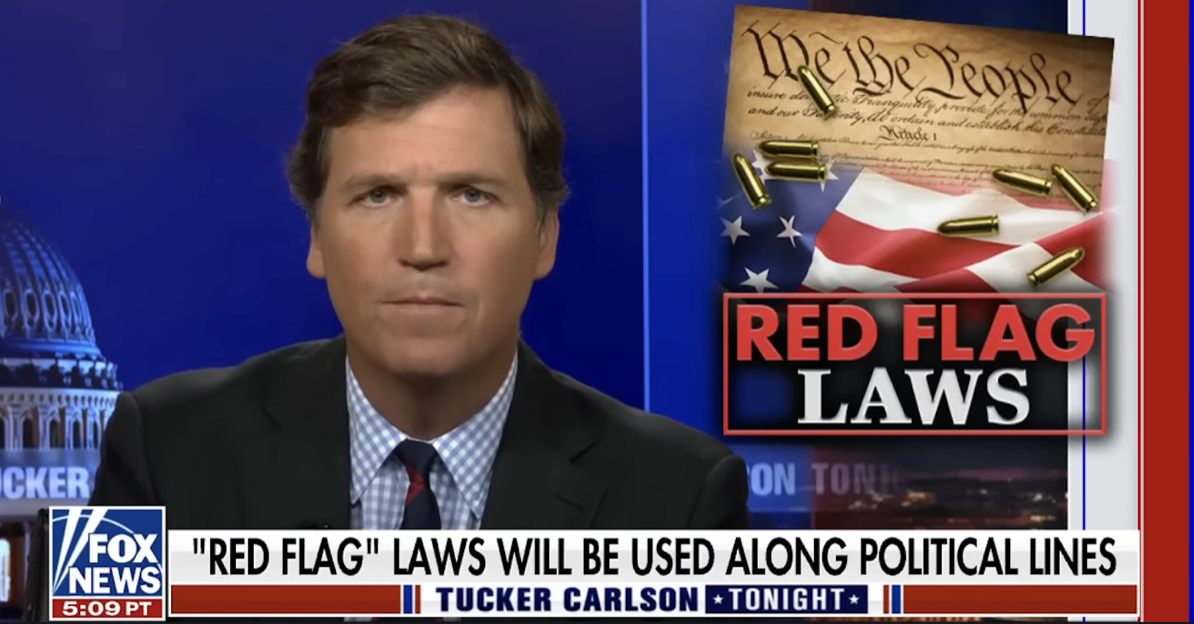 America is in the midst of a violent, national crime wave fueled by Democrat-led efforts to defund the police and empower criminals. Yet, 10 Republican Senators are supporting a yet-to-be-written bill that will violate, repeal or infringe upon YOUR Second Amendment right to protect yourself, your loved ones and your property. Last night, on his #1-rated, cable-news program, FOX News' Tucker Carlson called out those 10 "pompous buffoons," saying:

"'Red flag' laws will not end mass shootings, but 'red flag' laws will end due process. ... Under 'red flag' laws the government doesn't have to prove you did anything wrong in order to strip you of your most basic rights. All that's required to punish you is a complaint, possibly even an anonymous complaint, in which somebody says you seem dangerous. Now that complaint doesn't come from a grand jury. It can come from anyone, including someone who hates you or someone who simply doesn't like your politics. It doesn't matter because no jury will ever see it. On the basis of that unproven complaint, you lose the ability to protect yourself and your family." (Click here to watch the entire segment.)

Carlson went on to explain that, just last year, the United States Supreme Court ruled against confiscating firearms without due process in a unanimous 9-0 decision: "Every justice, liberal and conservative, agreed that authorities cannot just seize your property or throw you in jail because they don't like the way you look or someone is mad at you. So, 'red flag' laws are unconstitutional. Period."

Also last night, Carlson insisted that Joe Biden is ignoring the justices' 2021 ruling by declaring an emergency, like with the eviction moratorium and vaccine mandates, and doing what they want. He added that "Democrats love emergencies. Nothing gives them more power more quickly."

As Barack Obama's former Chief of Staff Rahm Emanuel famously said in November of 2008, "You never want a serious crisis to go to waste. And what I mean by that (is), it's an opportunity to do things that you think you could not do before."

So to get what they want regarding gun control, Democrats -- with the help of 10 Senate RINOs -- will declare an emergency regarding school shootings, while ignoring the deadly, daily, gun violence in Democrat-run cities like New York, Chicago, Philadelphia and others.

So, why should law-abiding gun owners be forced by Congress to forfeit their firearms and be prevented from exercising their Second Amendment right "to keep and bear Arms"? The answer is: They shouldn't according to the United States Constitution, which states without ambiguity:

"(T)he right of the people to keep and bear Arms shall not be infringed."

But with 10 RINO Senators supporting a gun-control bill that isn't written yet, the Biden regime and the radical, unhinged left will get EXACTLY what they want. They'll have a law in place that infringes on the Second Amendment rights of law-abiding Americans and possibly targets their political "enemies."

You can take immediate action to protect your freedom "to keep and bear Arms." Make your voice heard by using Grassfire's unique FaxFire system to send a personalized "Stop Biden's Gun Grab!" message to Senators on Capitol Hill.

Instantly make your voice heard to oppose the Biden regime's efforts to disarm the American people. Send your "Stop Biden's Gun Grab!" faxes to Capitol Hill now. Click here or on the banner below to immediately fax all 50 GOP Senators and moderate Sen. Joe Manchin (D-WV) for only $30, or reach EVERY member of the Senate (100 faxes) for only $50:

The fears of gun-rights supporters were realized last week when the Democrat-controlled House "overreached" in the wake of recent politicized tragedies. They passed a gun-control law that infringes on the constitutional right "to keep and bear Arms." That bill faced an uncertain fate, as 60 votes are needed to pass legislation in the Upper Chamber. But now, with 10 RINO votes, the unwritten "compromise" bill will very likely pass the Senate.

Again, Congress is one step closer to passing "gun control" in defiance of the Second Amendment. If you missed our previous update, please see below for the list of 10 "Republicans In Name Only" who are willing to sacrifice your rights to radical Democrats and the Biden regime. Click here to fax Senators now.

Even if you've reached out to lawmakers before to protect your Second Amend rights, please consider faxing them again. This updated FaxFire targets your two Senators, Senate Minority Leader Mitch McConnell (R-KY) and those ten RINO Senators for only $15. Thanks, in advance, for taking action this morning.

Tucker Carlson: This is a total lie (FOX News via YouTube)