On Friday, in the dark of night, 13 Republican traitors in the House voted in favor of Joe Biden's $1.2-trillion, fake "infrastructure" bill. Just three days after Democrats suffered humiliating defeats in local, statewide and national elections, those turncoats helped give Joe Biden a HUGE legislative victory.

That "Dirty Baker's Dozen" of GOP Reps joined 19 RINO Senators who, back in August, voted for "Phase 1" of the Biden regime's SOCIALIST SPENDING SCAM. Grassfire hopes "America First" patriots remember ALL of those those lawmakers names on Election Day.

As the push to turn our great nation into "The United States of Socialism" intensifies, attacks have been ramping up against Sen. Kyrsten Sinema (D-AZ) and Sen. Joe Manchin (D-WV). They're the only Senate Democrats AGAINST spending trillions of taxpayer dollars to enact Joe Biden's far-left, un-American and unsustainable agenda.

Last week, a mob harassed Sen. Manchin as he walked along the streets of our nation's capital. He also had his car blocked by a group of climate protestors as he tried to leave a parking garage in Washington, D.C. They were disturbing displays by members of the radical, unhinged Left that Americans pray don't escalate to violence. (Grassfire has links to the video below.)

Grassfire wants to know where you stand. Is the radical, unhinged Left is going too far to pressure, even intimidate, Sen. Manchin and Sen. Sinema? Please vote in our "Going Too Far?" QuickPoll now. 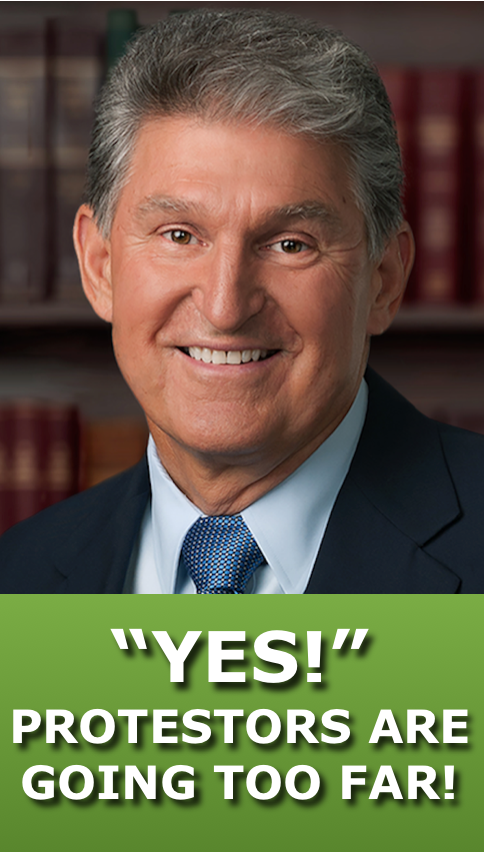 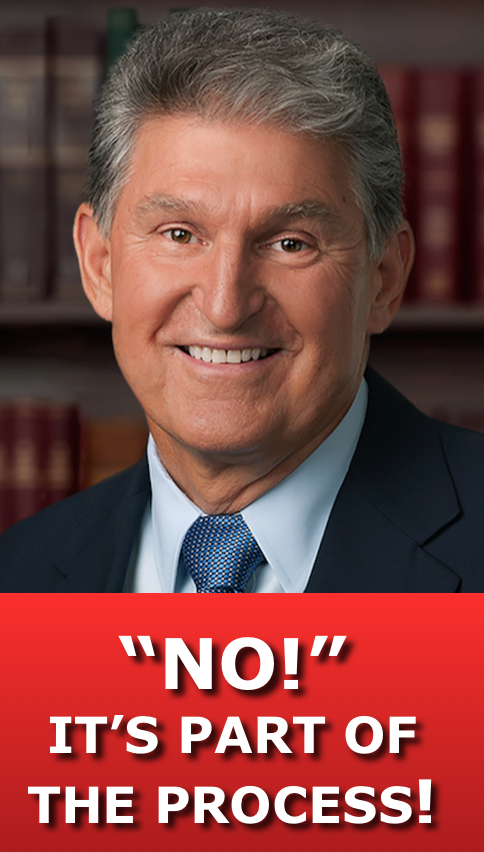 + + Sen. Manchin & Sen. Sinema Are "On The Tip Of The Spear" In The Battle To Save America!

Recently, The Wall Street Journal called the SPENDING SCAM "rotten tax policy" and "increasingly unpopular," adding: "The best result would be for the entire farce to collapse from its own dead weight." The newspaper's editorial board also wrote that the costs are "phony," but they insist "the social and fiscal damage are real."

The Biden regime's SOCIALIST SPENDING SCAM will dictate who we are as a nation moving forward. Will America remain the land of life, liberty and limited government? Or will the radical, unhinged Left push the United States off a fiscal cliff into full-blown socialism?

Due to a legislative tactic known as "budget reconciliation," the Biden regime's $6-TRILLION SPENDING SCAM can be passed with a simple majority vote in the Senate. All 50 Republicans in the Upper Chamber are opposed to pushing the U.S. off a fiscal cliff into full-blown socialism. If Sinema or Manchin vote "NO!", Democrats won't have the 50 votes they need to have Kamala Harris cast the tie-breaking vote.

That's why Manchin and Sinema are on the tip of the spear in this battle to save America. The pressure on those two Senators from their fellow Democrats is intensifying by the day. But they can stop the U.S. from falling into a fiscal cliff into full-blown socialism. Thanks, in advance, for making your voice heard today.

P.S. Please note that our QuickPolls are not scientific. They're for informational purposes only and are not meant to support a specific candidate or position. However, we do feel their results accurately reflect the views of "America First" patriots.