The proposed "infrastructure" bills are really about financing a radical, far-left agenda on the backs of hard-working, American taxpayers. The radical, far-left Democrat "wish lists" are expected to be voted on in the Senate the week of July 19, after Democrats and RINOs craft their dirty deals of compromise. 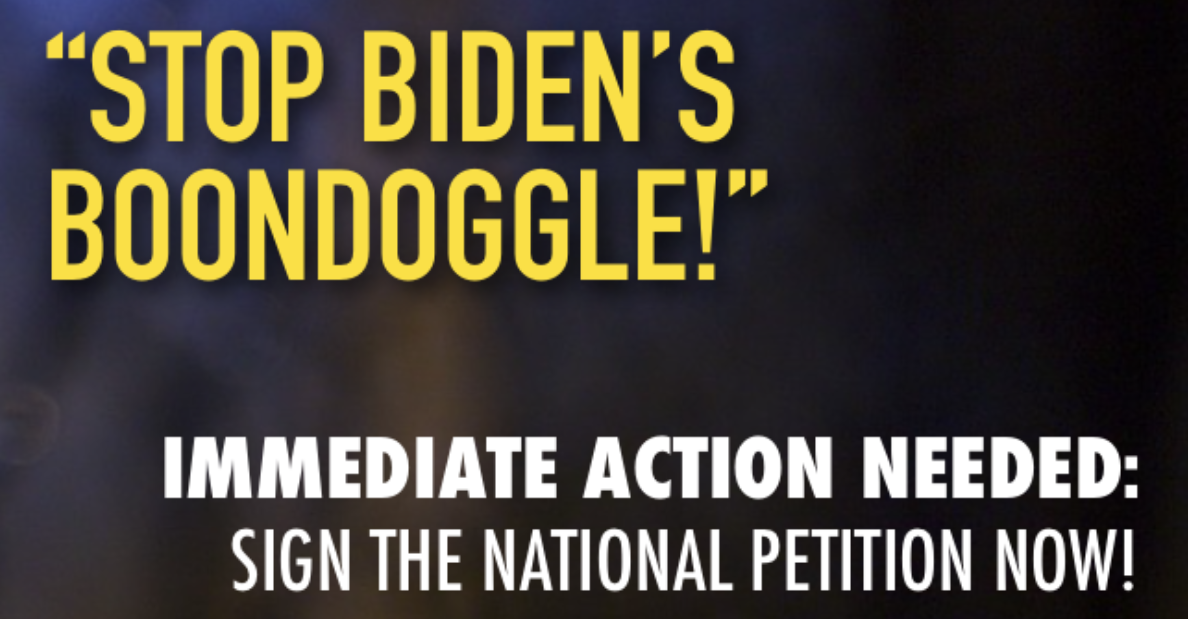 "Biden's Boondoggle" isn't about building and repairing essential roads, bridges, airports, the U.S. energy grid, etc. Democrats are defining "infrastructure" as whatever they want it to be: paid leave, childcare, police accountability, affordable housing, fighting "climate change" and even packing the Supreme Court.

What's worse is that Democrats are counting on weak Republican Senators to cave on the $1.2 trillion "infrastructure" compromise that would open the door to the even BIGGER, highly partisan, $3.5 trillion spending bill that can be passed through "budget reconciliation." That bill would green-light record spending on the Democrats' radical, extreme, far-Left agenda -- and it wouldn't need a single GOP vote to pass.

You can take action now to demand Senators "Stop Biden's Boondoggles!" If you oppose financing another $4.7 trillion in partisan, pork-spending with Americans' hard-earned tax dollars, sign the national petition below. Add your name now and Grassfire will deliver your petition to Senate Republican leadership on Capitol Hill when we reach 20,000 signatures.

The Merriam-Webster Dictionary defines "boondoggle" as "a wasteful or impractical project or activity." The radical leftists leading the Biden regime are trying to burden the American people with another $4.7 trillion in boondoggles. These "infrastructure" bills are Democrat wish-lists of progressive, pork spending that, if passed, will lead to the biggest expansion of government in American history. Also, it's not about building and repairing essential roads, bridges, airports, the U.S. energy grid, etc. Democrats are defining "infrastructure" as whatever far-left they want it to be. That's why Republican Senators MUST take action to "Stop Biden's Boondoggles!"