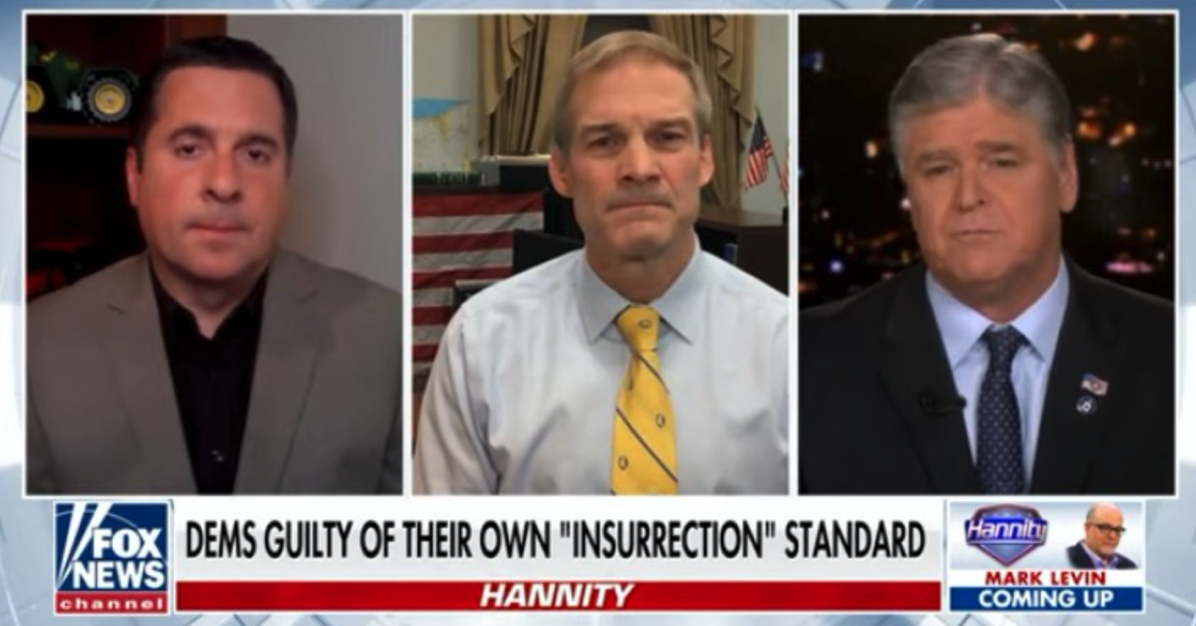 In this morning's message (see below), we told you about Rep. Devin Nunes (R-CA) calling the Democrat-led impeachment trial of President Trump a "circus." But Nunes wasn't the only GOP lawmaker on "Hannity" last night, criticizing the radical Left.

Rep. Jim Jordan (R-OH) spoke with Sean Hannity about what the host said was "a breathtaking double standard and rank hypocrisy" regarding impeachment. Jordan's response couldn't have been more on point. Here's an excerpt from his takedown of Democrats:

"Last summer, Democrat members of the Congress said there needs to be more unrest in the streets, while there was unrest in the streets, and somehow that's not incitement? But when the President says, 'Peacefully and patriotically make your voices heard,' they're going to impeach him? This is what Americans so despise. ...

"That's why they so appreciated President Trump. Because he came here and did what he said and fought for the things that American families care about. And right now, they're seeing, as Devin said, this crazy 'circus' of an impeachment."

(Click here to watch Rep. Jordan call out Democrats for their hypocrisy and double standards.)

+ + Take Immediate Action To Demand Republicans Vote "NO!" On Impeachment!

The House managers' case against President Trump is weak, baseless and lacks due process -- just like the first impeachment trial. The radical, unhinged Left has done and said much, much worse than the actions of our 45th president in the weeks that followed the ENGINEERED results of the 2020 election.

For Mr. Trump to be retroactively impeached and disqualified from running again in 2024, 17 of the 50 Senate Republicans will need to vote for conviction. While that's not likely, it's not impossible. That's why Grassfire is empowering our team members to make their voices heard with our "Reject The Impeachment Witch Hunt!" FaxFire.

Demand all 50 GOP Senators vote "NO!" on convicting President Trump. Click here or on the banner below now to immediately fax your personalized, anti-impeachment message to EVERY Republican in the United States Senate for only $30:

On Tuesday, six GOP Senators (12%) stood with all 50 Democrats and refused to declare that this sham, circus trial is constitutional. By clicking here now, you can tell those Senators (and the rest of the Upper Chamber) to "Reject The Impeachment Witch Hunt!" Thanks, in advance, for taking action tonight.

P.S. If you missed this morning's update, you can see it here. Grassfire shared a list of the "Top 5" most-egregious actions by Democrat lawmakers during the first two days of the trial. It's an eye-opening list that every Trump supporter should read. Click here or on the banner below now to call on all 50 Senate Republicans to "Reject The Impeachment Witch Hunt!" of President Trump for just $30: