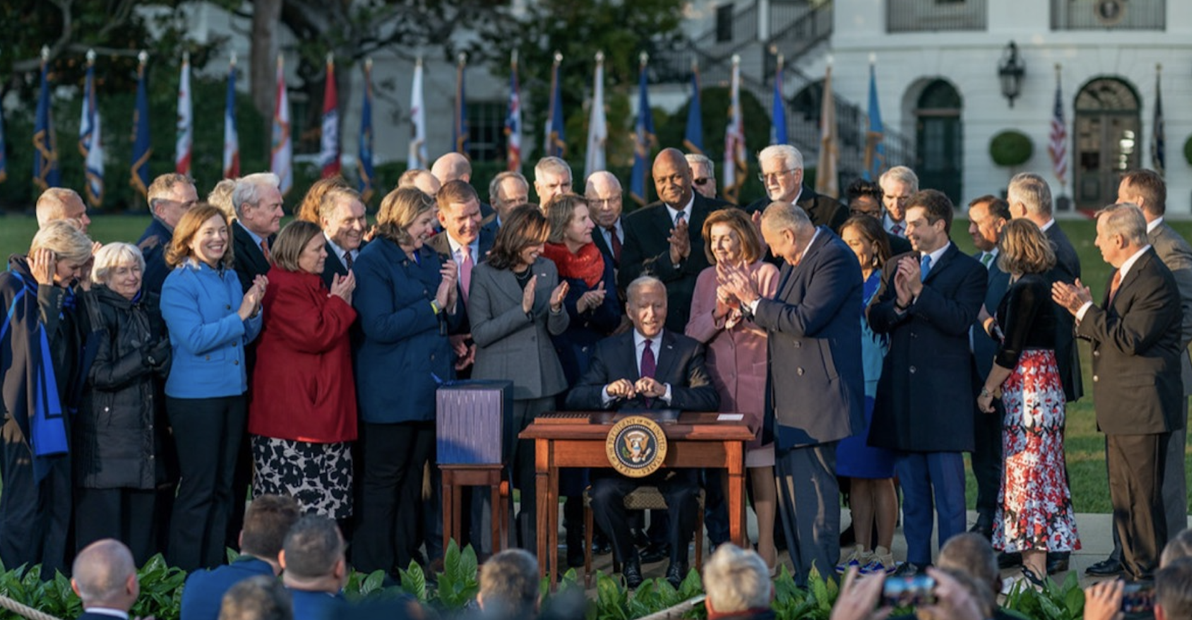 "It's going to be a mess." —Sen. Mitch McConnell's office

The Biden regime and their allies in the House and Senate are trying to push a $4.9-trillion, SOCIALIST SPENDING SCAM down the throats of the American people. They're rushing to pass the biggest expansion of the federal government in U.S. history BEFORE December 25. The radical, unhinged Left wants to ruin Christmas, while "fundamentally transforming the United States of America"!

In an email yesterday afternoon, the office of Senate Minority Leader Mitch McConnell (R-KY) warned us about what's ahead from Joe Biden's "Build Back Better" boondoggle:

"It's going to be a mess — this week and well into December. ... We are currently scheduled to adjourn on Friday, Dec 10. I don't think that'll happen. If you encounter anyone who does, tell them you have original Hunter Biden art for sale — they'll probably buy."

"Schumer still needs to work out a final BBB [Build Back Better] deal with Sens. JOE MANCHIN (D-W.Va.) and KYRSTEN SINEMA (D-Ariz.). … Schumer is confident he can pull all of this off by Dec. 25."

Sens. Sinema and Manchin are the keys to saving the United States from becoming "America The Socialist." Their "NO!" votes can stop Mr. Biden's $4.9-trillion SPENDING SCAM. So far, the two "moderate" Senators are holding the line and refusing to support the HUGE tax-and-spend plan their fellow Democrats want.

It will only take one of them to derail the Biden regime's "Build Back Better" boondoggle. That's why Grassfire is giving our team members the opportunity to make their voices heard. Take immediate action by telling us if you think Joe Biden, Schumer, Pelosi and their ilk will ruin Christmas by driving America off a fiscal cliff into full-blown socialism. Please vote in our "Yes or No?" QuickPoll now.

Before the Senate votes on the $4.9-trillion, radical, far-left "wish list," Grassfire is giving our team members the opportunity to push back against the "Biden boondoggle." Click here or on the "YES!" button below if you think the SOCIALIST SPENDING SCAM is bad for the United States. Click here or on the "NO!" button below if you do NOT think "Build Back Better" is a threat to America.

+ + Will Joe Biden's SOCIALIST SPENDING SCAM End America As We Know It?

While still a presidential candidate in October 2008, Barack Obama made it very clear that his mission was "fundamentally transforming the United States of America." His surrogates — Joe Biden, Speaker Pelosi and Sen. Schumer — have picked up where the former "Radical-in-Chief" and the D.C. Swamp left off.

The Biden regime's "Build Back Better" boondoggle could be the end of America as we know it. The next few weeks WILL determine the very future of the United States. It's no exaggeration to say our great nation is teetering on the brink of socialism. Is America going to remain the land of the free and the home of the brave? Or will Joe Biden and the Democrats successfully create their false utopia of a socialist, police state?

The radical, unhinged Democrats' push to turn America socialist is a threat to YOUR constitutional liberties, personal freedom and way of life. If grassroots patriots don't take action AGAINST the Biden regime's "Build Back Better" boondoggle, the $4.9-trillion "wish list" of radical, progressive, pork spending is likely to "fundamentally transform" the U.S.

All 50 GOP Senators insist they'll vote against the bill when it comes to the floor soon. Sinema and Manchin say the bill's "price tag" is too high, and they do NOT support it — at least for now. Either one of their "No" votes will kill Joe Biden's SOCIALIST SPENDING SCAM!

The only way to defeat the $4.9-trillion "Build Back Better" boondoggle is for "America First" patriots to rise up and take action! If you reject the Unhinged Left trying to use trillions of taxpayer dollars to build a super highway to socialism, please make your voice heard.

We'll share the results of our "Yes or No?" QuickPoll after we reach 10,000 votes. Thanks, in advance, for participating.

P.S. Through a legislative tactic known as "budget reconciliation," this multi-trillion-dollar, socialist bill requires only a simple majority vote to pass the Senate. That means it could become law with ZERO REPUBLICAN VOTES! Should America become "The United States of Socialism" with no GOP support? Please vote in Grassfire's "Yes or No?" QuickPoll now: