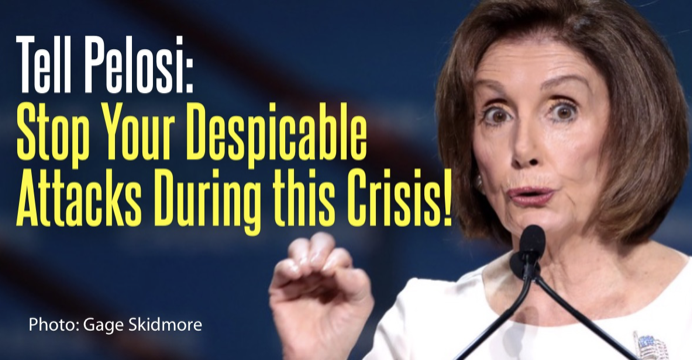 Grassfire received an urgent email just a short time ago from the office of Senate Majority Leader Mitch McConnell (R-KY). The subject line was "Surreal Democratic Behavior", and the first two sentences told us why:

"The Senate just completed its pro forma session and adjourned, with Democrats still blocking a straight increase to the Paycheck Protection Program (PPP). With this, the Paycheck Protection Program has exhausted its originally allocated funds and the PPP is now unable to continue offering a lifeline to America’s Small Businesses" (emphasis theirs).

The email also noted that 20 million Americans have lost their jobs in the past month. On the Senate floor today, McConnell blasted obstructionists on the Left: "Americans need Democrats to stop blocking emergency paycheck money and let this job-saving program reopen."

Also, in separate emails we received after 9:00 p.m. ET last night, both McConnell and House Minority Leader Kevin McCathy (R-CA) blasted House Speaker Nancy Pelosi (D-CA) for what they called "continued Democratic obstruction." Their joint statement read, in part: "Even as the program is saving millions of American jobs, Speaker Pelosi has said she sees 'no data as to why we need' to keep funding it.

As if Pelosi's despicable attacks against President Trump weren't enough, now she's knowingly and willingly failing the American people in the midst of a national crisis!

Yesterday, Grassfire showed you how the Speaker used Easter as a catapult for lies and smears against our Commander-in-Chief. (See below.) For just $15, you can fax Pelosi and your congressional delegation, along with House and Senate leaders in Washington, D.C.

Click here or on the banner below to send a personalized message to key members of Congress demanding the Speaker apologize and be punished for her ridiculous, divisive and un-American behavior. Schedule your "PELOSI OUTRAGE" FAXES for immediate delivery on Capitol Hill:

Again, if you missed yesterday's message refuting Speaker Pelosi's blatant lies and smears against President Trump, we've included it below. If you have read that update, please forward this email to family and friends. Ask them to stand with you by faxing now and calling for an end to these despicable attacks during a national crisis. Thanks, in advance, for taking action today.

House Speaker Nancy Pelosi (D-CA) launched another despicable attack against President Trump. What makes this verbal assault worse than her other recent ones is how she used Easter Weekend, the holiest days of the Christian faith, as a catapult for her lies and smears against America's Commander-in-Chief.

Pelosi has repeatedly announced to the world that she's a Catholic, even though her abortion-on-demand policies (and other far-Left ideologies) are in total disagreement with the Church's teachings on the sanctity of life. Her latest salvo against the President came via a press release yesterday. It reads, in part:

This Easter Weekend provided me with a time for deeper prayer and reflection. ... To succeed in this crisis, we must insist on the truth, and we must act upon it!

There's much more to Pelosi's fantasy-filled tirade against Mr. Trump, but we simply don't have the time and space to address every falsehood contained in it. (You can read the entire press release here.) But Grassfire wants to refute the first three Pelosi lies.

Make no mistake. The sickness, death and financial ruin that has infected the entire world over the past few months is ALL CHINA'S FAULT. Trying to blame the President is nothing more than spreading propaganda on behalf of the communist Chinese government.

Speaker Pelosi and her ilk should be ashamed of themselves, and the American people should call them out for it! If you're sick of these despicable attacks against President Trump, Grassfire is empowering YOU to send a clear message to your members of Congress, key House leaders and the Speaker herself. Click here or on the banner below now to schedule your "PELOSI OUTRAGE" FAXES for immediate delivery on Capitol Hill:

Even in the midst of the COVID-19 crisis, Nancy Pelosi STILL can't manage to put aside her hyper-partisan, anti-American hate for President Trump. Thousands of people have died. Millions Americans have been thrown out of work by panicked, nationwide shutdowns. One of the most robust economies in U.S. history has been devastated. But the Speaker's only solution is to attack America's Commander-in-Chief with blatant lies and smears.

Pelosi even delayed last month's $2.2 TRILLION bipartisan, government bailout by a full week. She tried to add a laundry list of ridiculous demands that had nothing to with fighting the coronavirus. Sen. Kevin Cramer (R-ND) called it a "Disney World wish list" for far-left Democrat policies. The Speaker has no leg to stand on when it comes to criticizing Mr. Trump for "causing the suffering of countless Americans."

FAX PELOSI, YOUR CONGRESSIONAL DELEGATION AND OTHER KEY D.C. LEADERS NOW! DEMAND AN APOLOGY AND PUNISHMENT FOR THE SPEAKER'S DESPICABLE ATTACKS.

P.S. Tell the Speaker what you think with Grassfire's "PELOSI OUTRAGE" FAXFIRE. Send a personalized message directly to her office, to your congressional delegation and to other key lawmakers on Capitol Hill. If you're sick of her despicable attacks against President Trump, click here or on the banner below now to schedule your faxes for immediate delivery: