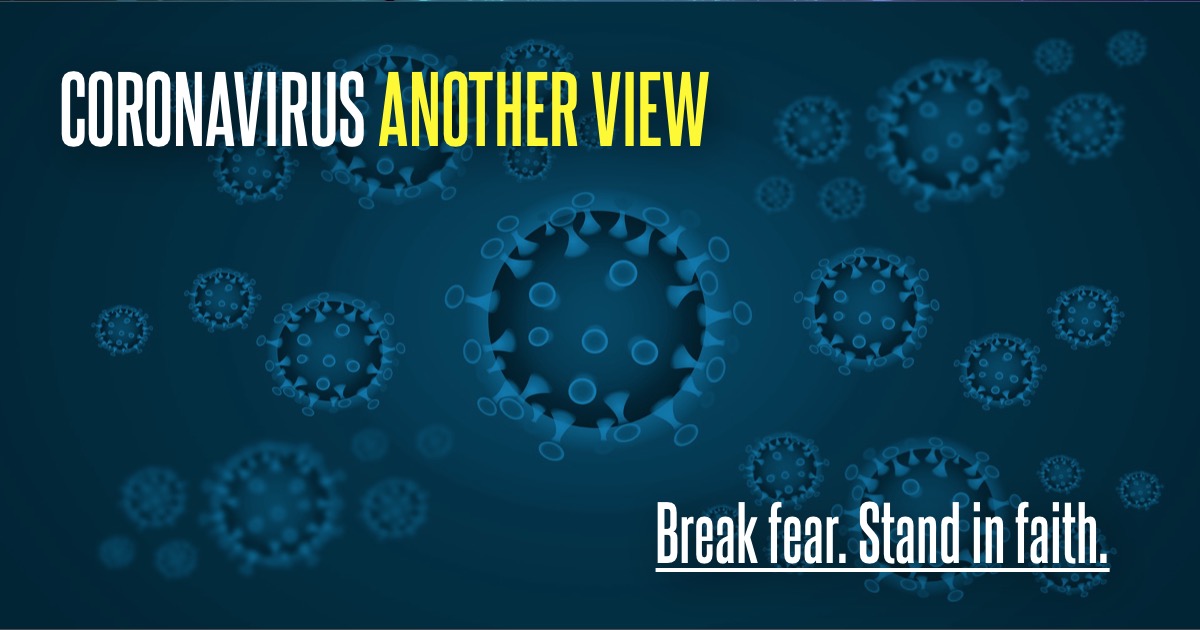 (March 13, 2020) In the past few weeks, we've all learned about "social distancing" and "flattening the curve" and the moral (and now in many areas legal) duty to not assemble together (see our lexicon). Society has spoken and we're all taking part in this "shut down" ride as we collectively fight the Chinese Coronavirus.

The response has been so overwhelming from seemingly all sectors of society that it's already gotten to the point that suggesting any opinion that brings into question the shutdown/quarantine strategy is, well, dangerous and a violation of our collective moral duty.(1) And one would assume that all the experts are unanimous in their opinion that the shutdown is the best and only way forward given the data and our circumstances.

Dr. Paul Offit is Director of Infectious Diseases at the Children's Hospital of Philadelphia. He's one of the leaders in the nation in the field of infectious diseases. He serves on the panel that each year decides what to target in the annual influenza vaccine. He strongly disagrees with the shutdown/quarantine approach and says bluntly, "We've scared the public to death."

I encourage you to take some time to listen to Dr. Offit. Two additional sources:

If I could summarize Offit's view it is this: Yes, this is a serious virus but it is more similar to other events we have experienced and if we shut down society for this, we really should shut down for every annual influenza season.

You may also want to listen to this podcast with Dr. Amesh Adalja who is part of the Johns Hopkins Center for Health Security -- one of the leading sources in the nation for information on this situation. Dr. Adalja thinks this is a serious situation but does not believe the shutdown protocols were warranted and at the time of this recording said that he wasn't doing the social distancing being recommended. (Note: the podcast host was clearly disturbed by Adalja's conclusions and spends most of the hour trying to steer Adalja back to his opinion that we are headed for doom.) You can hear even more from Adalja from this lecture on youtube. Here is the section of Adalja's lecture in which he presents his predictions for the virus and projects that the fear of coronavirus is a worse threat than the virus:

Again, Offit and Adalja and others aren't saying that the Chinese Coronavirus isn't dangerous. They think it is. They recognize that people will die. And, as experts in this field, they say ideally we would all practice social distancing and be way more careful with every outbreak including annual influenza which killed 60,00-70,000 Americans just two years ago. But they are more afraid of our fear-based responses than the virus -- the economic and societal ramifications.

It's a challenging argument because it is a public policy argument based on cost-benefit analysis. So what do the numbers say?

Two factors ultimately will decide how bad this coronavirus is: percent of population infected and the hospitalization and ultimately death rate.

For example, as of this writing (3/16), there have been 4,108 cases and 71 deaths in America. If at the end of the day 710,000 Americans were hospitalized and 61,000 died from the Chinese Coronavirus, how bad would that seem to you? Those numbers are the totals for the influenza outbreak in America of just two years ago. Now, the concern is that the Chinese Coronavirus is much worse than our annual battle with influenza (Offit, an influenza expert disagrees with that conclusion).

So what does the data say about Chinese Coronavirus?

The strongest data set we currently have to project the Chinese Coronavirus mortality rate is coming from South Korea, where extensive testing has been done. Here's the latest data out of South Korea (updated as of 3/13):

That means the current "crude mortality ratio" in South Korea is .8%) -- about 75% lower than the 3.4% discussed commonly. This is amazingly consistent with the mortality rate in China outside of Wuhan -- .7%. Even the small case study of the Diamond Princess cruise ship that was stranded at the onset of the outbreak also suggests a lower mortality rate -- 705 infected, 6 deaths (.9%). So far, Germany has reported an even lower rate -- 3,117 cases and just seven deaths (.2%). (You can see the latest numbers for every country reporting here.)

What about Italy? Italy's crude mortality ratio is much higher -- 7.7%. The data looks more like the situation in Wuhan where the virus started. Also, there may be conditions in Italy that are causing that nation to be more vulnerable, namely the age of the population (more than 56% of the deaths are in the 80+ age group).

So we have three large samples (China outside of Wuhan, Italy and Germany) that indicate a lower mortality ratio and thus lower mortality rate -- probably capping at .8% or .7%. It is quite possible that the actual mortality rate will be much lower since a significant percentage of people who contract COVID-19 will never be sick enough to even be tested. For example if three people who get the disease aren't tested for every person who is tested, the .7% mortality rate drops to .2% which is the general estimate for the 2009 Swine Flu.

The other assumption is that a significant percentage of the population will contract COVID-19. For example, Germany's leader said 70% of Germans would likely get the disease. That may prove true, but if so it may simply further drive down the mortality rate as such an extrapolation as "70%" would only be a guess with the vast majority of people not needing medical care (for example, an estimated 60 million Americans contracted the 2009 Swine Flu while a quarter million were hospitalized).

So let's look to the data in Korea again. Those 8,000 or so positive tests came from a pool of nearly 250,000 tests of people who had active respiratory illness symptoms. That means of those in Korea who have respiratory symptoms, about 3% have proven to be infected with this coronavirus. Remember that they are testing those with symptoms, so the overall infection rate of the general population, if the 3% number holds, would likely be significantly less. And looking at South Korea's number of daily cases, it seems that country is well beyond the peak: 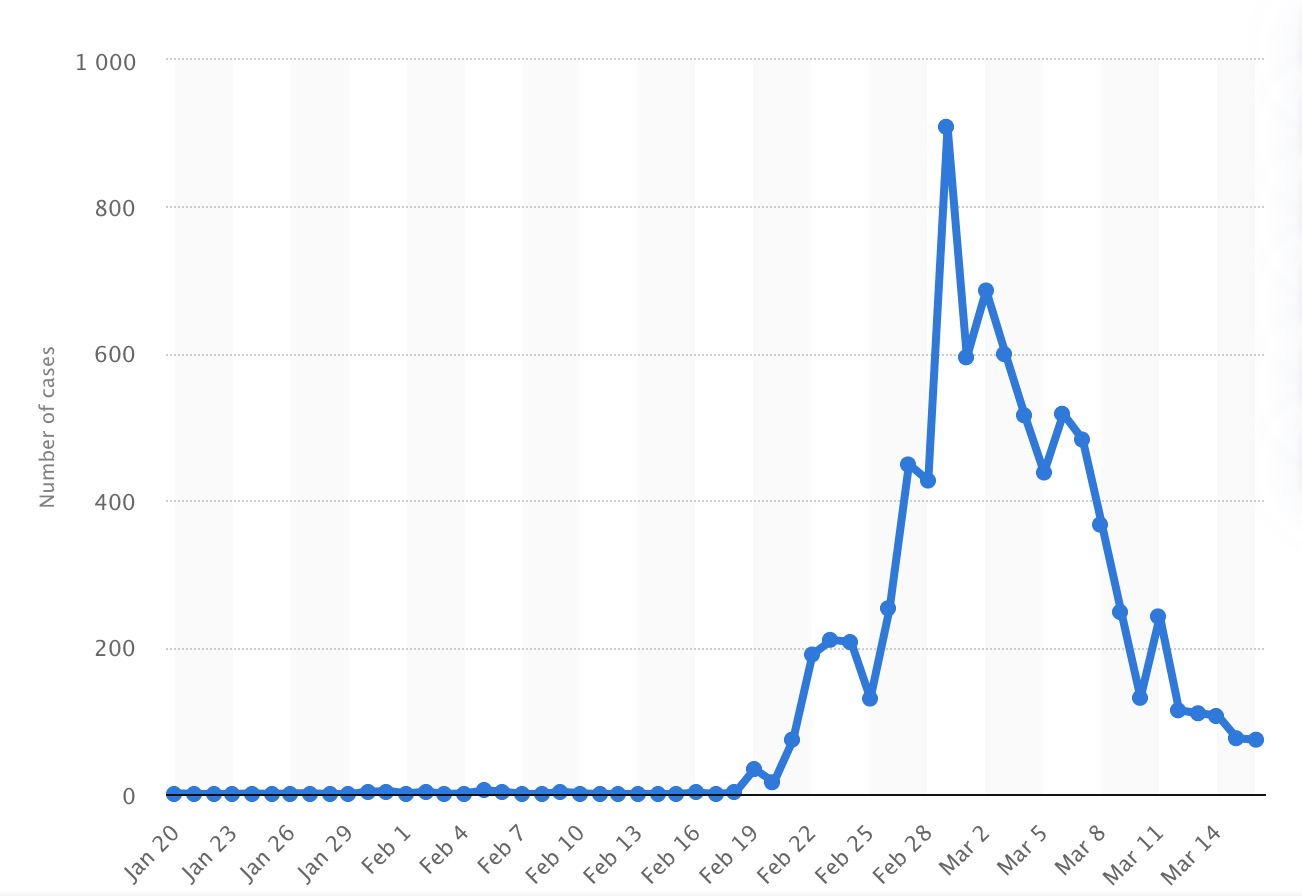 How South Korea made it to the other side of it's bell curve in just about 10 days (Feb 20 to Feb. 29) is the key question. If we followed a similar per-capital pattern (51m in Korea, 325m in the U.S.), America might peak at around 5,000-6,000 new daily cases (we're currently at 700).So while 5,000 new daily cases will sound shocking and will undoubtedly lead to more shutdowns and likely quarantines, it could be expected and should not be cause for world-ending alarm, especially if that proves to be at or near the peak.

Yes, if we follow the pattern of Italy, the situation here will be far worse as Italy has a 32% raw infection rate and a 8% raw mortality rate. But our recent history with the Swine Flu showed that the U.S. mortality rate was far below the estimated worldwide mortality rate. Why do we assume in this case that the U.S. rates will be worse than China outside of Wuhan and South Korea?

In fact, this is precisely what the President's team of medical experts was suggesting on Friday (3/13). Here is Dr. Deborah Birx of the President's Coronavirus Task Force, essentially stating the above analysis of South Korea:

Of course, we all hope for the best. And along the way, I'm trusting that civility will prevail and even views like that of Dr. Offit will be allowed to be heard.

(1) For example, with less than 50 deaths in the entire country, it seemed as if most churches willingly chose not to meet on March 15. Now, cities and states are imposing very restrictive bans that will make it impossible for most churches to meet publicly together for perhaps weeks. This may be the first time in U.S. history this has happened. I haven't heard anyone question it.

Tweet
Another view on the coronavirus crisis...
Read the blog at Grassfire