We estimate U.S. cost of the coronavirus economic shutdown and lockdown is $34 TRILLION 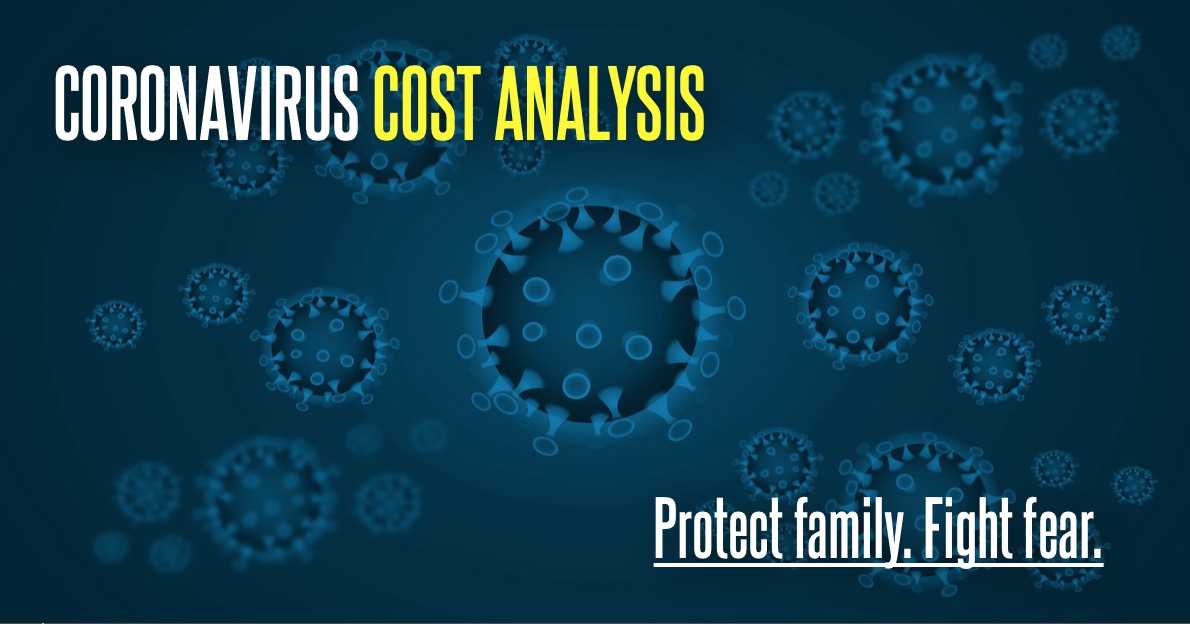 When he was announcing the state of New York's "stay home" shutdown/lockdown of the state's 20 million people, Gov. Cuomo made heartwarming statement about why he was taking the action:

“I did everything we could do … This is about saving lives. If everything we do saves just one life, I’ll be happy.” (emphasis added)

Let me be very clear: No one is expendable. No matter your age, race, gender, religion, ethnicity, sexual orientation, or disability. No life is worth losing to add one more point to the Dow.

Save just "one life." "No life is worth losing." It sounds so good. But clearly the "one life" argument is fallacious on its face. Otherwise, we must ban driving and swimming pools and stairs for that matter (which kill 12,000 people annually).

So how many lives does it take? Two? Two thousand? Twenty thousand? And at what point do we consider the cost?

You may be thinking, how dare you put a price on lives? Because I'm not asking Gov. Cuomo or President Trump to be a Pastor. Our religious leaders don't put a price on individual lives. They always leave the 99 to save the one, as Jesus said. That's what pastors do and that's my personal standard as a Christian. It just can't be our standard as a society regarding our public policy.

If we're going to be honest, at some point we will need to do a serious "cost benefit analysis" of the economic and societal cost of literally shutting down huge swaths of our society and confining people to their homes. (Note: I'm not dealing with the cost in terms of our civil and religious liberties. That is high as well. We address that here.)

So I started searching, and to my surprise as of 3/23 it was difficult to find a one-stop resource that summarized the economic devastation of the coronavirus fear shutdown. Think about that for a moment...

I can access a dozen or more sites that seem to be updated several times a day letting me know precisely how many people have died from the coronavirus and how many just tested positive, but few if any good sources on the costs to society of the fear shutdown.

So let's count the costs.

At the end of February, reports indicate the stock market lost $6 trillion in valuation based on a drop of the Dow Jones Average from a high of 29,551 to 25,429 in the first wave of coronavirus crisis slides. Until we find a site that states the total loss due to the coronavirus crisis, based on the $6 trillion slide, we are estimating the total loss as of 3/31 (with the Dow at 18,591) to be:

They say those are "paper losses" and the market was "due for a correction." Tell that to the retired couple depending on their stocks to live in retirement. Or the near-retirement age couple that just saw the goal of retirement fade away.

On March 20, Goldman Sachs drastically lowered its U.S. economic projections and is now expecting that that U.S.GDP will contract by 3.8% this year, as opposed to the projection at the outset of the year of 2% growth. It took America about three years to get back to the level of GDP output after the 2008-9 recession. Based on this data, we project the LOSS in GDP due to the coronavirus crisis:

The U.S. Federal Reserve of St. Louis is projecting the possibility of up to 47 million lost jobs (32.1% unemployment), which is far greater than the Great Depression (24.9% unemployment)

But what's the cost? One study after the 2008-9 recession found that losing your job during that recession cost the person $112,000 over the next 25 years. In today's dollars, that's $135,000. Using this estimate, that means the COVID-19 economic shutdown cost U.S. workers

All the emergency stimulus efforts of Congress are simply adding to the piles and piles of debt. So the added debt is a real cost that someone will have to pay. At some point, we will pay in a devaluation of our dollars. In the long run, we're saddling our children and grandchildren with an impossible debt burden.

Adding these costs up, we come to a grand total of...

That's more than the entire annual GDP of our country.

We are sure there are other costs:

Perhaps the stock market will regain all its losses. Let's say it does in 24 months. Even so, all investors lose TWO YEARS of investment growth.

We need to have an open discussion about the costs of the nation's COVID response. Were there no other options? Could we not have "firewalled" the ONLY statistically vulnerable community -- the elderly, and specifically the elderly with co-morbidities?  (Those under 40 have about a .2% mortality rate from this, which is getting close to the risk of influenza.)

Instead of pursuing the least disruptive means of controlling this virus, the governments took the most aggressive path that has ever been seen in U.S. history. We have faced effective Martial Law (nicely called "stay home" orders, like we are pets... "stay") and the suspension of basic human rights. We think we should be adult enough to at least have a discussion of the costs and the benefits.

Sign in with or
Don't have an account? Click here to create one.
Please check your e-mail for a link to activate your account.
Economic costs of coronavirus crisis:
Read the blog at Grassfire