Quarantines... bans on public meetings... what are your Constitutional rights? 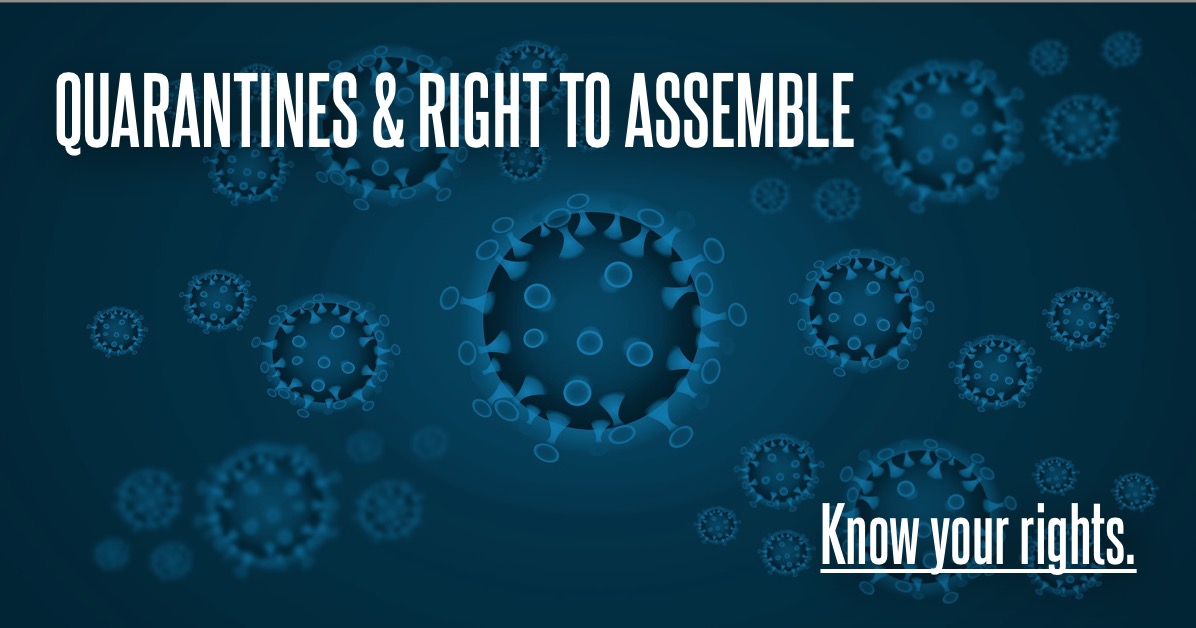 (3/12/20) As we rush into full Coronavirus SHUT DOWN, will anyone stop and ask, WHAT ARE OUR RIGHTS? What can the government do and not do -- even in a declared "health emergency"?

This is one of the greatest challenges we face as America responds to the Chinese Coronavirus. China has created the model -- but it is totalitarian model. China effectively shut down large sectors of its society -- jobs, travel. Banned. It has created almost an expectation among the elites that we must follow the same model.

Thus far, for the most part, the quarantines and bans have been voluntary. For example, the NBA is a private organization that made a decision to stop holding games and the NCAA is also a private organization that decided to hold games with no fans in attendance. But the quarantines and bans are now beginning to be executed through local and state governments.

But are quarantines and bans constitutional?

1. "Freedom is the default position." He says: "These rights preexisted the government. Their source is our humanity. Government does not grant these rights. Rather, its primary purpose – as stated in the Declaration of Independence, its sole purpose – is to protect these rights."

2. On quarantines in general. "Can the [federal] government quarantine people without proof of contagion and imminent assault? The short answer is no." Not without due process. "Than means a trial for every person confined," says Napolitano. Thus the burden of proof is on the government, and the rights of individuals must be addressed

3. What about a quarantine of an entire area (neighborhood, postal code, city)? Napolitano says NO:

"A government-ordered quarantine of all persons in a city block or a postal ZIP code or a telephone area code would be an egregious violation of due process, both substantive and procedural. Substantively, no government in America has the lawful power to curtail natural rights by decree.

"Procedurally, notwithstanding the fear of disease contagion, the states and feds may only quarantine those who are actively contagious and will infect others imminently. And it must present evidence of both at a trial at which it bears the burden of proof."

Local and state governments are imposing bans on "large" gatherings. For example, the Governor of Washington State, by fiat, banned all gatherings of 250 or more in several counties:

"I hereby prohibit the following activities...: Gatherings of 250 people or more for social, spiritual and recreational activities including, but not limited to, community, civic, public, leisure, faith-based, or sporting events; parades; concerts; festivals; conventions; fundraisers; and similar activities."

Here is an answer in a forum thread. We can't vouch for the accuracy of the constitutional argument but it is consistent with what we've heard:

It is well-established in constitutional law that no rights guaranteed by the Constitution are absolute. Your right to assemble may be limited by the government, as long as the law so restricting you passes "strict scrutiny". For that test to be passed, the government has to show that it is necessary to a "compelling state interest", it is "narrowly tailored" to achieving this interest, and uses the "least restrictive means" to do so. The courts will simply accept the premise that the government has a compelling interest in preventing the spread of a serious disease. Narrow tailoring and least-restrictive are not quite so clear. You could maybe take the position that the prohibition should have an exception for people who are "certifiably not exposed" (a narrower restriction), but that is medical fantasy.

Perhaps someone can devise a medically-sound narrower restriction, and that would come out in the lawsuit. Alternatively (this is where the lawyers and not the doctors would get involved), it is possible that the assembly-ban is completely ineffective and therefore it does not accomplish the intended end. But it is reasonable to think that an assembly-ban will have some positive effect w.r.t. the spread of the disease. So I doubt that the courts will find that the present Washington state assembly-ban fails strict scrutiny (I don't know about other bans).

It seems gathering bans can be imposed as long as they meet the "compelling state interest," attempt to use the "least restrictive means," and are not in any way targeted against a certain people or group of people. So you couldn't ban churches but allow concerts. And we assume a ban like the one in Washington State wouldn't hold up without a strict, short-term, time limit.

So where does that leave us? It seems our government is trying to follow the effect of the Chinese "shut down" model without openly imposing bans and quarantines, especially at the federal level. When asked on directly on Fox & Friends (3/12) whether the U.S. should impose China-like quarantines, the Vice President was careful to avoid the question and steer his answer to the government's efforts in "supporting" state and local response and CDC's "strong recommendations":