URGENT: Senators are expected to cast their FINAL VOTES TODAY to infringe on your constitutional right "to keep and bear Arms." Take immediate action to protect the Second Amendment by clicking here now, or see this morning's update below. Thanks in advance. —Grassfire

On his social-media website Truth, President Trump issued a strong warning to the GOP and "America First" patriots about Joe Biden's gun grab. He's predicting the "Bipartisan Safer Communities Act" will be open the door to gun confiscation and the end of the Second Amendment as we know it. He wrote: 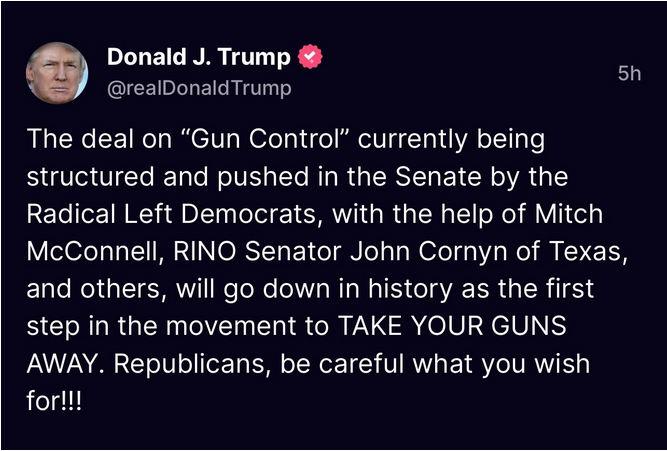 The deal on "Gun Control" currently being structured and pushed in the Senate by the Radical Left Democrats, with the help of (Senate Minority Leader) Mitch McConnell (R-KY), RINO Senator John Cornyn of Texas, and others, will go down in history as the first step in the movement to TAKE YOUR GUNS AWAY. Republicans, be careful what you wish for!!!

The "Bipartisan Safer Communities Act" is being fast tracked so Senators can pass the billion-dollar, anti-gun bill before the start of their two-week, July 4th recess tomorrow. Fourteen GOP turncoats already voted once to violate your Second, Fourth and Fifth Amendment rights. With final Senate votes expected TODAY, time is running out to protect your constitutional rights by instantly making your voice heard on Capitol Hill!

Take immediate action to stop Democrat and RINO Senators from giving Joe Biden what he wants -- to infringe on the constitutional rights of law-abiding Americans! Protect the Second Amendment and your freedom "to keep and bear Arms" by using Grassfire's unique FaxFire system to instantly send a personalized "Stop Biden's Gun Grab!" message to Senators in Washington, D.C.

Take a stand against the Biden regime's efforts to disarm law-abiding Americans. Make your voice heard now by sending "Stop Biden's Gun Grab!" faxes to Capitol Hill. Click here or on the banner below to immediately fax all 50 GOP Senators for only $30, or reach EVERY member of the Senate (100 faxes) for only $50:

Again, the Senate is "fast tracking" the gun-control bill so it can be passed THIS WEEK. Grassfire will continue to keep our team members updated about today's expected votes. But if there has EVER been a four-alarm fire that requires an immediate, overwhelming, grassroots response from "America First" patriots, this is it! Click here to fax Senators now.

The Second Amendment clearly states: "The right of the people to keep and bear Arms shall not be infringed." The U.S. Constitution is very specific when it comes to gun control. Why should law-abiding gun owners be forced by Congress to forfeit their firearms and pay the price for the failures of the Biden regime and their allies on the radical, unhinged Left?

American cities have become battle zones of rising crime and gang violence, and the U.S. southern border is disintegrating. You can take immediate action to stop Joe Biden, his fellow Democrats and Senate RINOs from making it harder for citizens to protect themselves! Click here to fax EVERY Republican Senator now for just $30, or reach all 100 U.S. Senators for only $50 to "Stop Biden's Gun Grab!"

We've discounted this urgent FaxFire by 40% and 50% to empower you and your fellow team members to make their voices heard. (To send your own pro-Second Amendment faxes to lawmakers, click here for a list of Senate targets and their contact information.) Thanks, in advance, for taking action today.

P.S. When criminals, terrorists or mentally ill individuals use guns to hurt and kill people, it's tragic and unacceptable. Grassfire supports only competent, law-abiding citizens having access to firearms. If you want to protect your God-given constitutional right "to keep and bear Arms," make your voice heard! Go here to fax Senators now: