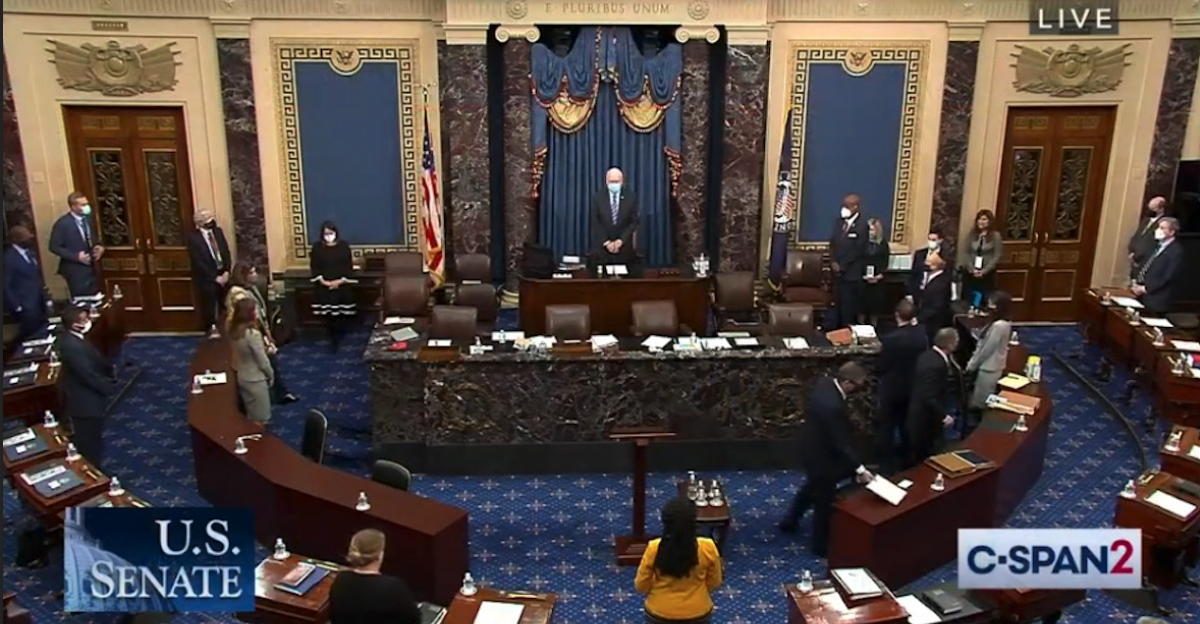 We just heard from the office of Senate Minority Leader Mitch McConnell (R-KY). At the time of this writing, the Upper Chamber has entered a question-and-answer period regarding the impeachment trial of President Trump. A final Senate vote on conviction is expected TOMORROW! Please see our update below, or click here to fax all 50 GOP Senators now. Tell them to vote "NO!" on impeachment. Thanks in advance. --Grassfire

President Trump's legal team took less than four hours to present evidence and rest their case today. The defense strategy included showing videos and tweets that highlighted the Democrats' hypocrisy in their push to impeach America's 45th president (again) for "incitement of insurrection."

At a "Stop The Steal" rally on January 6, Mr. Trump encouraged his supporters to "peacefully and patriotically make your voices heard." Democrats claim that sparked an "insurrection." But when the unarmed group of mostly (but not all) Trump supporters breached the Capitol, the President was still speaking.

This afternoon, his defense team exposed rhetoric from Democrats that was much more inciting and damaging to our nation than anything said on January 6. Here are some of the "greatest hits" from today's video presentations:

"I just don't even know why there aren't uprisings all over the country. Maybe there will be." --House Speaker Nancy Pelosi (D-CA)

"There needs to be unrest in the streets for as long as there's unrest in our lives." --Rep. Ayanna Pressley (D-MA)

"And you push back on (Trump's cabinet members), and you tell them they're not welcome anymore, anywhere." --Rep. Maxine Waters (D-CA)

If we were in high school, I'd take (Trump) behind the gym and beat the h*ll out of him." --Then-former VP Joe Biden (D-DE)

You get the idea.

The Trump legal team also used video segments to reveal differences between quotes the House managers used in their prosecution and what the President said "in full context." Another effective defense tactic was using Democrats' own words to weaken the House's case against impeachment. They showed clip after clip of Senators, Representatives and others using the same fiery, spirited language as Mr. Trump.

+ + Take Immediate Action To Demand Republicans Vote "NO!" On Impeachment!

Today's defense presentation proves just how weak the House managers' case against President Trump really is. Radical Democrats and the Unhinged Left have done and said much, much worse than our 45th president. But they get a free pass from each other and the FAKE NEWS media, while conservative voices are canceled, censored and silenced.

It's time for Senate Republicans to take a bold stand for President Trump and the 74 million Americans who voted for him. They need to vote "NO!" -- not only to exonerate our former commander-in-chief -- but to also tell Democrats and the Left, "Hand off our First Amendment rights!"

If GOP Senators don't vote "NO!" against impeachment this weekend, it could give the radical Left a green light to limit conservative thought, action and speech. Isn't it possible that Democrats will ban future Trump rallies as subversive, unlawful assemblies? Couldn't voices speaking out against the anti-American, anti-family Biden-Harris agenda be targeted for harassment and public "shaming"?

Demand all 50 GOP Senators take a stand for conservative voices by voting "NO!" on convicting President Trump. Click here or on the banner below now to immediately fax your personalized, anti-impeachment message to EVERY Republican in the United States Senate for only $30:

To retroactively impeach and disqualify Trump from running again in 2024, 17 of the 50 Senate Republicans will need to vote for conviction. While that's not likely, it's not impossible. That's why Grassfire is empowering our team members to make their voices heard with our "Reject The Impeachment Witch Hunt!" FaxFire.

On Tuesday, six GOP Senators (12%) stood with all 50 Democrats and refused to declare that this sham, circus trial is unconstitutional. By clicking here now, you can tell those Senators (and the rest of the Upper Chamber) to "Reject The Impeachment Witch Hunt!" Thanks, in advance, for taking action tonight.

P.S. If you missed this morning's update, please see here. We gave our team members an idea of what to expect today and this weekend in President Trump's impeachment trial. Click here or on the banner below now to call on all 50 Senate Republicans to "Reject The Impeachment Witch Hunt!" of President Trump for just $30: