Tucker to RINOs on gun control: "Why are you doing this?" 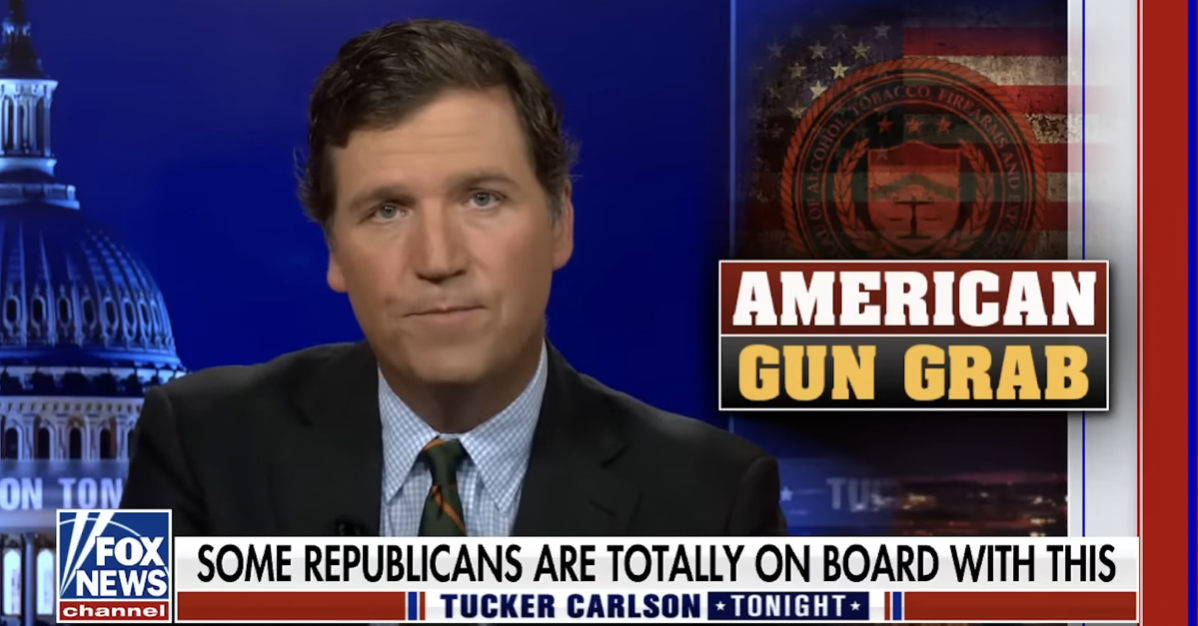 "There's a big push in the U.S. Senate to do something about so-called gun crime. If you had a map of gun crime, that is crimes committed with guns, ... you would notice that they are clustered in cities. That's where the overwhelming majority of gun crime takes place.

"But the Senate isn't trying to do anything about that. Instead, Democrats have decided this is a perfect opportunity in the wake of school shootings to disarm you. And the amazing thing is, (Senate Minority Leader) Mitch McConnell (R-KY), the head Republican in the Senate, is on their side completely. And he's rounded up a group of 10 Republicans who can help him." (Watch the three-minute segment here: WARNING — graphic content)

Carlson also warned again about red-flag laws being "the backbone of this package of legislation," saying: "A red flag law would allow the government to confiscate your firearms without even charging you with a crime, much less convicting you of one."

Last week, Axios also reported that Sen. John Kennedy (R-LA) wanted to know if the bill is "focusing on gang violence and inner-city murders." Cornyn's reply? "No, we're not focusing on that." On Friday night, Carlson wondered why Cornyn was even negotiating with Democrats on gun control if the legislation isn't targeting gun crime:

"(T)he crime spike that we're seeing now is not complicated at all. Prosecutors across the country are refusing to enforce laws that we already have and when you do that, crime spikes. So, if you’re in the United States Senate, if you're John Cornyn from Texas, supposedly a free state of Texas, you'd probably want to do something about that. But no, John Cornyn has decided to take guns from lawful gun owners, and if there's one reason you vote Republican, it's to prevent that."

The "America First" backlash over Joe Biden's "gun grab" must continue and intensify for this gun-control legislation to be defeated in the Senate. You can stop Democrat and RINO Senators from giving Joe Biden what he wants -- to infringe on the Second Amendment rights of law-abiding Americans!

The United States is in the midst of a violent, national crime wave fueled by Democrat-led efforts to empower criminals and defund the police. Why should law-abiding gun owners be forced by Congress to forfeit their firearms and pay the price for the failures of the Biden regime and their allies on the radical, unhinged Left?

If you want the Republicans to stay united and stand strong against Joe Biden's "gun grab," you can instantly make your voice heard. Take immediate action to protect your freedom and oppose the Biden regime's efforts to disarm the American people by signing the "Protect The Second!" national petition.

Grassfire is empowering you to protect your constitutional right "to keep and bear Arms"! Click here or on the banner below now to add your name to the "Protect The Second!" national petition:

The Second Amendment clearly states: "The right of the people to keep and bear Arms shall not be infringed." The U.S. Constitution is very specific when it comes to gun control. Police cannot be everywhere, which is why American citizens have used firearms to defend their lives and property for nearly 250 years.

Senate Majority Leader Chuck Schumer (D-NY) wants the Senate to vote THIS WEEK on a bill that Senators STILL didn't have in writing as of this weekend. American cities have become battle zones of rising crime and gang violence, and the U.S. southern border is disintegrating. But you can take immediate action to stop the Biden regime, radical Democrats and Senate RINOs from making it harder for law-abiding citizens to protect themselves!

Grassfire is mobilizing the delivery of more than 271,000 names of pro-Second Amendment Americans to GOP leaders on Capitol Hill THIS WEEK. If you don't want politicized tragedy used by Democrats to punish millions of law-abiding gun owners, click here to add your name to the "Protect The Second" national petition. Thanks, in advance, for taking action this morning.

P.S. Criminals using guns to hurt and kill people is tragic and unacceptable. Most Americans would agree that no terrorist, criminal or mentally ill person should have access to firearms. But if you think gun-control laws should NOT prevent mentally competent, law-abiding citizens from exercising their God-given constitutional right "to keep and bear Arms," make your voice heard! Go here to sign the national petition now: