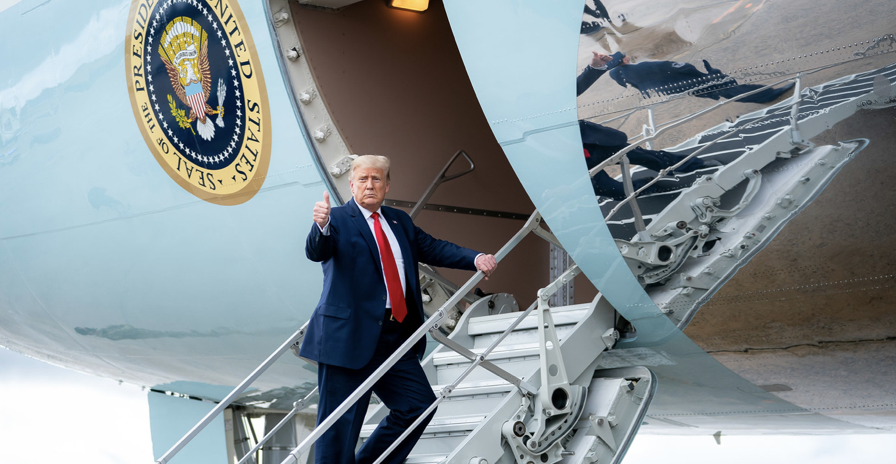 The Trump campaign's Michigan rally on Thursday looked and sounded a lot like the President's North Carolina stop two days earlier. Another raucous, pro-Trump crowd gathered at an airport hangar. This time, it was Freeland, Michigan, with Air Force One as the backdrop.

Just like the previous rally in the Tar Heel State, the hyped-up Republicans in the Wolverine State left America's Commander-in-Chief speechless. About 10 minutes into the President's 79-minute speech, the nearly 10,000-strong crowd (officials were expecting 5,000) began chanting, "We love you! We love you!"

"Don't say that. I'll start to cry, and that wouldn't be good for my image," the Commander-in-Chief joked. "We had a tremendous crowd in North Carolina. They started chanting, 'We love you! We love you! We love you!' And you know, it's incredible. (The media) said, with all the years that they've been covering presidential elections, they've never heard that chant that 'We love you.' No. It's very nice."

The energy and excitement surrounding this re-election campaign is unprecedented. When Democrat presidential nominee Joe Biden arrived in Michigan on Wednesday, he was greeted by a crowd of ... (wait for it) ... Trump supporters! The "enthusiasm gap" between the two candidates is jarring.

"I have the distinct pleasure of running against the worst presidential candidate in the history of presidential politics," Mr. Trump said on Thursday. "I really believe that. Can you imagine if I lost to him? I’d have to say I lost to the worst candidate ever put up. Don’t do that to me, Michigan."

Because COVID-19 restrictions are limiting large gatherings, only a small fraction of Americans can attend a Trump rally. So Grassfire wants to give you the opportunity to join thousands of supporters who are telling the President exactly how they feel. Take action now by signing the national "We Love You, President Trump!" Petition.

Click here or on the banner below to Let America's Commander-in-Chief know how much you appreciate what he's done and will continue doing to "Make America Great Again!" Add you name to the national "We Love You, President Trump!" Petition now:

When we reach our goal of 10,000 signers, Grassfire will deliver your name to the President's campaign. Also, please consider sharing this petition with your pro-Trump friends and family members, and urge them to sign, too.

The President endures a near-constant barrage of hate and vitriol from the radical Left. We can only imagine how much energy it gave our Commander-in-Chief to stand before a crowd of almost 10,000 patriots and hear that chant again.

They weren't screaming his name, "Make America great again!" or "Four more years!" Like the men, women and children at the North Carolina rally, the patriots in Michigan yelled "We love you!" as an expression of their appreciation and affection for Mr. Trump.

We want to give you the opportunity to push back against the "haters" by adding your name to the national "We Love You, President Trump!" Petition. Click here to sign now. Thank you, in advance, for taking action today.

P.S. Again, the "We Love You" chant is unprecedented in the history of presidential-campaign politics. That's why Grassfire is giving you the opportunity to tell America's Commander-in-Chief how YOU feel. The national "We Love You, President Trump!" Petition states:

I'm one of the millions of Americans who is so thankful that God has chosen you to lead this great nation. I stand with them today in saying: "We love you!" (See more...)