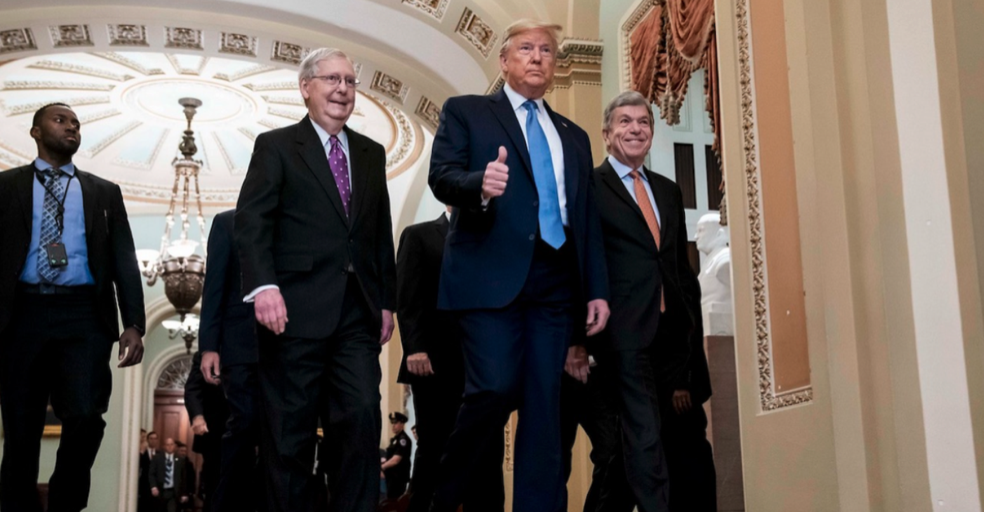 One day after Senate Minority Leader Mitch McConnell (R-KY) attacked President Trump in a Wall Street Journal op-ed (see the link below), America's 45th president responded with some choice words of his own. He released a statement on Tuesday calling McConnell "a dour, sullen, and unsmiling political hack." He also warned: "(I)f Republican Senators are going to stay with him, they will not win again. He will never do what needs to be done, or what is right for our country."

But is America's 45th president popular enough among GOP voters to get Senators to listen? It appears so. POLITICO reported on Tuesday that President Trump is still the clear choice to lead the party. In fact, "81% of Republican respondents gave him positive marks." Their recent poll also reveals:

Fifty-nine percent of Republican voters said they want Trump to play a major role in their party going forward. That’s up 18 percentage points from a Morning Consult poll conducted on Jan. 7, and an increase of 9 points from a follow-up poll on Jan. 25, before the impeachment trial began.

Do McConnell's recent attacks against President Trump -- who's clearly still very popular with the GOP base -- mean that Republicans need a new Senate leader? If you answered yes, utilize Grassfire's "Ditch Mitch!" FaxFire to demand Senators remove McConnell and replace him with a leader who fully supports our 45th president and his "America First" agenda.

In just minutes, your personalized message can reach EVERY Republican in the United States Senate. Click here or on the banner below to immediately fax 50 GOP Senators for just $30 and demand they "Ditch Mitch!" now:

Your faxes can reach 50 Senators today for just $30. To encourage team members to take action, we've discounted this FaxFire by 40%! That means you can reach GOP lawmakers today for only 60 cents each! To send your own faxes, click here for a complete list of FaxFire targets and their contact information.

If McConnell resigns or gets "booted" from his leadership position, he might end up leaving the Senate. Kentucky's Democrat governor likely would NOT appoint a Republican to take his place.

But if you agree that having a pro-Trump Minority Leader is more important than risking the current 50-50 balance of power in the Senate, click here to fax now! Thanks, in advance, for taking action today.

P.S. Again, our unique FaxFire system enables you to reach directly inside the halls of Congress. Call on GOP Senators to replace current Minority "Leader" Mitch McConnell with a Republican who fully supports President Trump and his "America First" agenda. Click here or on the banner below to immediately fax EVERY Senate Republican for only $30 and demand they "Ditch Mitch!" now:

Acquittal Vindicated the Constitution, Not Trump (The Wall Street Journal)