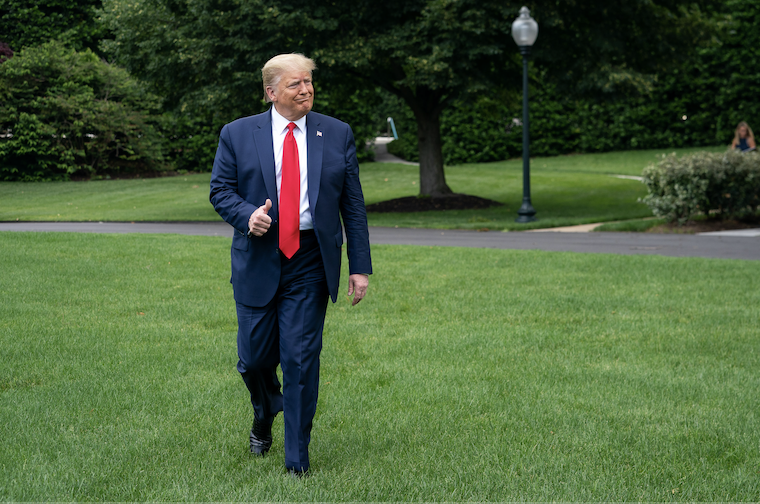 President Trump has signed an executive order calling for law enforcement nationwide to institute reforms aimed at preventing fatal police-related incidents. The order is in response to George Floyd's death in police custody three weeks ago in Minneapolis, the fatal shooting of DUI suspect Rayshard Brooks in Atlanta this past weekend, and other recent, high-profile deaths. FOX News reports:

Trump's order touches on use of force best practices, information sharing to track officers who have repeated complaints against them and federal incentives for police departments to deploy non-police experts on issues like mental health, homelessness and addiction. Trump said law enforcement officers would only be allowed to use chokeholds if their lives are in danger.

The President called the effort "historic action to deliver a future of safety and security for Americans of every race, religion, color and creed." He also added, "Though we may all come from different places and different backgrounds, we're united by our desire to ensure peace and dignity and equality for all Americans."

Before announcing his police-reform order at a ceremony in the White House Rose Garden yesterday, the President met personally with several families who he said "lost loved ones after deadly interactions with police."

"To all of the hurting families," Mr. Trump said, "I want you to know that all Americans mourn by your side. Your loved ones will not have died in vain. We are one nation. We grieve together, and we heal together. I can never imagine your pain or the depth of your anguish. But I can promise to fight for justice for all of our people, and I gave a commitment to all of those families today."

But according one ABC News contributor: "A presidential executive action has little impact on the day-to-day operations on state and local law enforcement agencies." That's true. But it's definitely a step in the right direction, especially if an executive order is followed by legislation, which is what happened today in the Senate.

Last week, House Democrats unveiled a different police-reform bill called the "Justice in Policing Act." A vote on the Senate bill is expected by next week. Grassfire will share more information about the vote when it becomes available to us from the office of Senate Majority Leader Mitch McConnell (R-KY).

These actions by President Trump and Sen. Scott come at a time when morale among law-enforcement personnel is said to be at an all-time low. As of Monday, 19 Atlanta police officers reportedly have resigned "amid the growing civil unrest." On Friday, a police major in Tulsa, Oklahoma published a chilling article on LawOfficer.com called "America, We Are Leaving." Travis Yates wrote:

"I wouldn't wish this job on my worst enemy. I would never send anyone I cared about into the hell that this profession has become."

Anti-police rhetoric and attacks by radical leftists and Democrat leaders is taking a toll on the men and women "in blue." Calls to defund the police continue, even though a majority of Americans surveyed (64% in a recent ABC News-Ipsos poll) reject the idea.

Grassfire's own "Support Our Police?" QuickPoll revealed that 98% of our team members stand with the men and women of law enforcement. Only 2% of those who responded want to see police departments defunded.

As a Grassfire team member, you can make your voice heard in the fight to DEFEND, rather than DEFUND, the police. Using our unique FaxFire system, you can send a personalized message to your governor, your congressional delegation and select House and Senate leaders -- up to 16 faxes -- for just $15. Click here or on the banner below to schedule your STAND WITH OUR POLICE FaxFire for immediate delivery to key lawmakers now:

Once thought to be an impossibly radical idea, "DEFUND THE POLICE!" quickly gained momentum among Democrats, liberals and so-called progressives. Hopefully, President Trump's actions yesterday and the pending Senate bill will put an end to those divisive efforts.

Today, you can stand with officers on the national, state and community levels to reject this dangerous, far-left agenda. Schedule your STAND WITH OUR POLICE faxes for immediate delivery on Capitol Hill. Go here to send your personalized, pro-police message to lawmakers now:

Grassfire is empowering you to take action, right now, to prevent local governments from disbanding their police departments, stripping hundreds of millions of dollars from law-enforcement budgets, and re-allocating those fund to "community-outreach programs" and social workers. Go the extra mile by utilizing our "Level 2" and "Level 3" FaxFires to reach EVERY governor and EVERY GOP Senator at a savings of more than 50% off!

P.S. Again, radical leftists are moving rapidly to defund the police. What started as peaceful protests against police brutality has turned into an unsafe, unrealistic and far-Left movement to erase our nation's "Thin Blue Line." Hundreds of thousands of brave, professional, moral and dedicated men and women put their lives on the line every day to stop and prevent crime. Without them, the nation would descend into chaos, which is exactly what America has seen in cities across the country over the past month. Click here or on the banner below now to schedule your "Support Our Police!" faxes for immediate delivery on Capitol Hill: