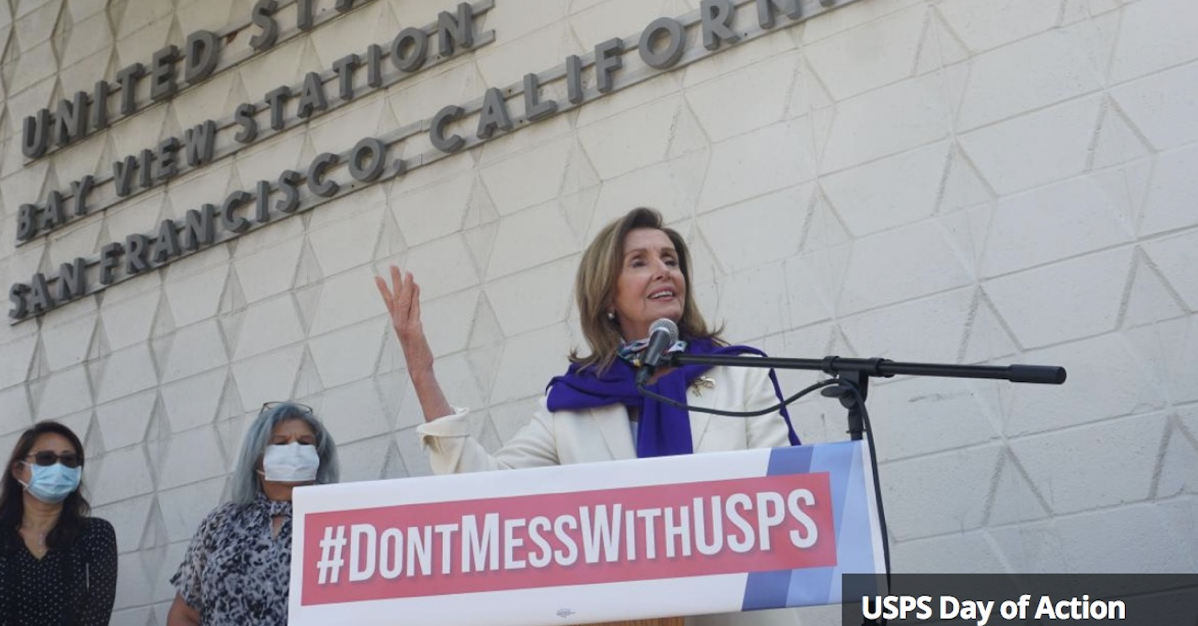 House Speaker Nancy Pelosi (D-CA) and her fellow Democrats are perpetuating their post-office hoax with fear and fairy tales. The Speaker, far-left Rep. Maxine Waters (D-CA), socialist Sen. Bernie Sanders (I-VT), former Democrat presidential candidate Hillary Clinton and even former President Barack Obama have ALL posted on Twitter recently about how President Trump doesn't care that seniors won't get their Social Security checks/benefits. (We built a web page displaying those tweets and more. Click here to see for yourself.)

But, as a cost-saving measure in 2013, the Obama administration stopped sending paper checks and switched to direct deposit! All five of those Democrat "leaders" were in office during that change. How could they NOT know paper checks aren't mailed to seniors? It appears to be a blatant scare tactic directed at Americans most likely to vote for President Trump!

The official government website for Social Security says: "To begin receiving your federal benefits, like Social Security or veterans benefits, you must sign up for electronic payments with direct deposit." Americans without bank or credit-union accounts are issued "a pre-paid debit card" or can receive their money through an "Electronic Transfer Account."

Are Obama, Clinton, Pelosi, Waters and Sanders so afraid of the President being re-elected that they're willing to outright LIE to the American people? If not, it sure looks that way! (Each of them makes a strong case that "Trump Derangement Syndrome" is real.)

The bottom line is that the President and Republicans in Congress are rejecting efforts to institute widespread mail-in voting for the 2020 election. Radical Democrats and FAKE NEWS hate that and are doing whatever they can, even lying to the American people, to make it happen.

The Left is manufacturing yet another crisis in hopes of destroying Mr. Trump. Speaker Pelosi wants the House to vote THIS WEEK on a bill to "Save The Postal Service" from the President. They claim our Commander-in-Chief has "declared war on the post office" for refusing to support a huge $28.5 billion bailout of the federal agency as part of a coronavirus relief bill. Our Commander-in-Chief said last week that he'd consider signing legislation to fund the post office, as long as it's not attached to COVID-19 aid.

The post-office hoax is, basically, a disagreement about how to best spend the American taxpayer's money. Republicans think financing possible ballot harvesting and voter fraud is a bad idea. Democrats disagree.

A House vote on a postal-service relief bill is expected THIS SATURDAY. That gives grassroots patriots like you, {{recipient.first_name_or_friend}}, just four days to make their voices heard! If you're AGAINST a Democrat-led rush to use mail-in ballots for the presidential election on November 3, click here or on the banner below to fax your Governor, Representative, two Senators and key House and Senate leaders now -- including Speaker Pelosi. Demand they say "NO!" to voting by mail:

Also, ask yourself if you're comfortable putting the presidential election in the hands of the post office. The COVID-19 pandemic is already challenging our mail system and many other industries like never before. Do you want to add the pressure of distributing and processing tens of millions of ballots so close to Election Day?

If you answered "NO!" to that question, we urge you to fax Speaker Pelosi NOW, along with your Governor, Representative, Senators and key leaders in the House and Senate. For just $15, demand they say "NO!" to vote by mail. Pressure lawmakers to take action and ensure "No Election Mail Fraud!" Click here now to schedule your personalized faxes for immediate delivery.

The United State's voting process must be credible and trustworthy. If people can social distance while standing in line at a supermarket, bank, etc., they can do the EXACT same thing to vote! Radical Democrats and their activist media allies have spent nearly six months trying to scare Americans to death (or into submission) about COVID-19. Now, because many of their supporters are afraid to leave their homes and vote, they want to change the rules at the last minute.

Go here to send your "NO ELECTION MAIL FRAUD!" faxes now! To see a full list of FaxFire targets and their contact information, click here. Thanks, in advance, for taking action today!

P.S. As we've mentioned before, paper ballots are "extremely susceptible to fraud." Also, absentee ballots, which voters have to request personally, "remain the largest source of potential voter fraud." Radical Democrats and the activist media want to mail millions of ballots to anyone and everyone they can. This vote-by-mail scheme would undermine the integrity of the 2020 elections. Members of both parties could engage in ballot harvesting, ballot stealing or ballot fraud, all of which could significantly impact the final vote.

If you think America can't risk this kind of election fraud, click here or on the banner below now to instantly fax lawmakers and urge them to say "NO!" to vote by mail: