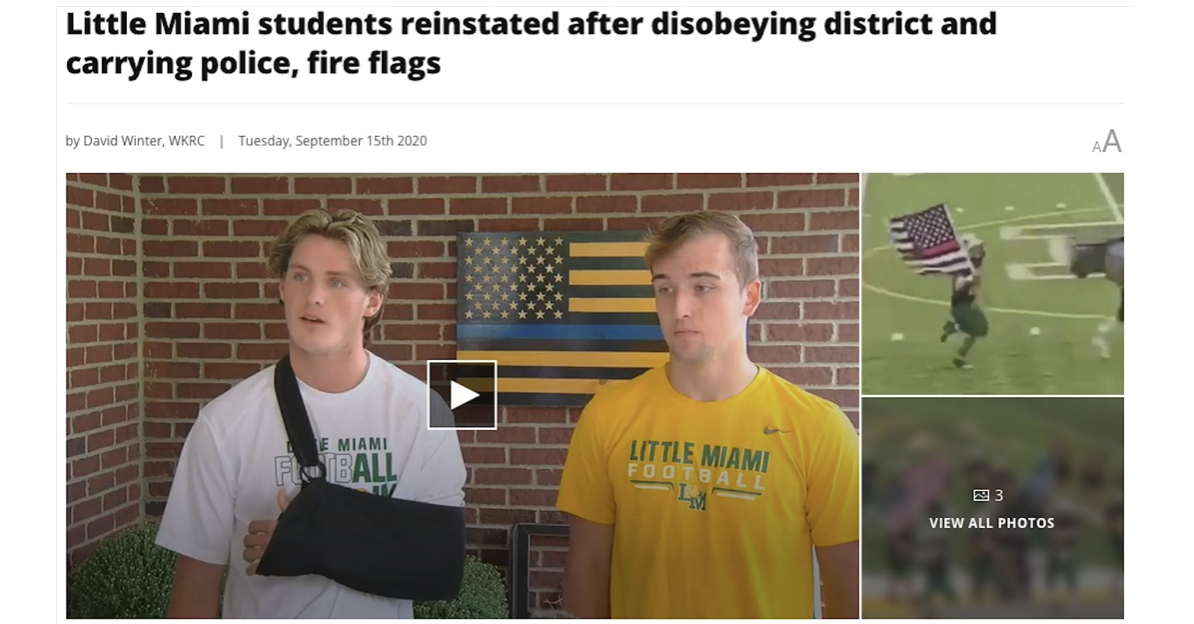 Yesterday, we shared the story of two high school football players in Ohio who were suspended, basically, for being patriotic and supporting first responders -- on September 11th! The boys ran onto the field before their game Friday night carrying Thin Blue Line and Thin Red Line flags.

WKRC-TV in Cincinnati says their web article about the boys' actions and subsequent suspension from the team received a massive response: "At one point, the story was getting 1,000 views a minute. ... Now, about a million people have viewed the story."

With all the hate that law enforcement currently faces from the radical Left, the school district's decision to allow the players to honor police and firefighters should have been an easy one. It wasn't, so local officials encountered a backlash of criticism.

See below for the full story, or go here to show your support for the men and women of law enforcement. Grassfire's "Thin Blue Line" ReStickers are available in appreciation for your contribution of ANY AMOUNT to help us build. Shipping is FREE, but supplies are extremely limited. Click here for more information.

P.S. We want to stand with the two players, Brady Williams and Jarad Bentley, in their support for law enforcement. So our warehouse staff is in the process of sending them "I Support The Thin Blue Line" ReStickers. But you can help us increase our impact. For every contribution of $35 or more we receive from Grassfire team members today, we'll send an extra ReSticker to the booster club at the boys' Ohio high school. Click here to help.

More than 400 first responders lost their lives when they ran into the burning buildings of the World Trade Center on September 11, 2001. Most Americans would think that kind of selfless heroism deserves to be honored and remembered, especially by today's youth.

Unfortunately, that's apparently not what some school administrators in Ohio think. They temporarily suspended two high school football players for running onto the field this past Friday with Thin Blue Line and Thin Red Line flags.

The boys did it as a tribute to fallen police officers and firefighters on the 19th anniversary of the terror attacks in New York and Washington, D.C. One of the players, whose father is an Ohio police officer, told a local TV station that he did it to "honor the people (who) lost their lives 19 years ago." The other suspended player's dad is a firefighter.

WKRC-TV in Cincinnati reports: "(T) the boys had asked the school [for] permission prior to the game and they were denied and told if they defied the order, there would be consequences."

School officials say they "saw the flags as symbols of a political point of view and didn’t want to set a precedent." We're not sure about you, but Grassfire thinks honoring police officers and firefighters, especially on 9/11, sets a great precedent.

On Monday afternoon, the boys received an indefinite suspension from the team. But, thankfully, they were reinstated the next day.

Are you tired of political correctness targeting the men and women who risk their lives to keep us safe? If so, Grassfire has a way you can stand with police officers who "walk the thin blue line" of law and order. 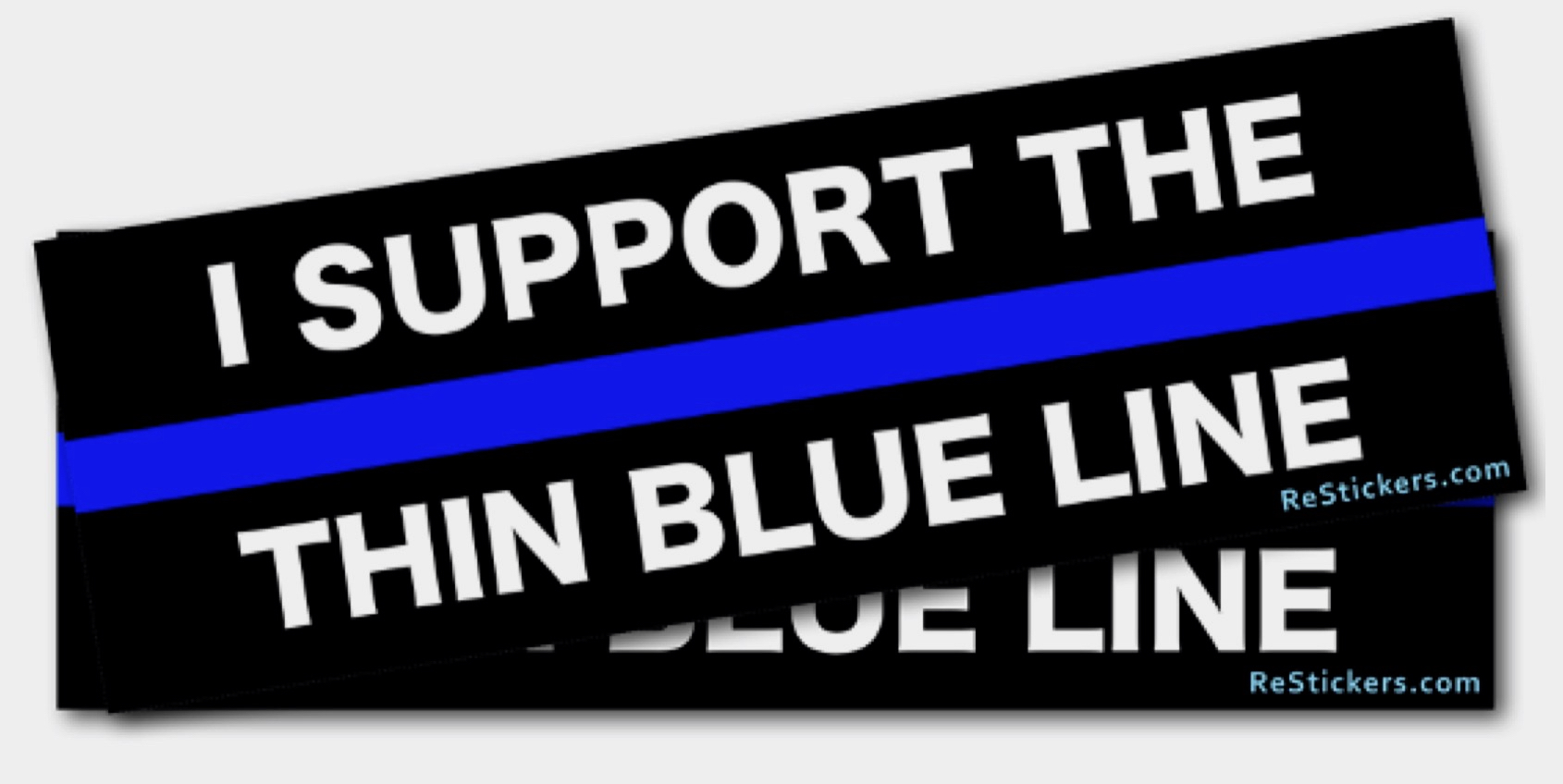 If you can support our grassroots efforts with a contribution of ANY AMOUNT today, Grassfire will send you an exclusive "I Support The Thin Blue Line" ReSticker as our gift. Contribute $25 or more to help Grassfire build during this critical election year, and you'll receive two of these specially-designed bumper stickers. For contributions of $35 or more, we'll send you five "Thin Blue Line" ReStickers.

Click here or on the banner below now to receive your "I Support The Thin Blue Line" ReStickers for your contribution to help Grassfire build:

For months, America has heard angry, violent voices rise up to condemn all police and reject law and order. But the actions of a few inexperienced, ill-trained or malicious officers do NOT represent the profession as a whole. The men and women of law enforcement aren't perfect, but they risk their lives to do a job that is becoming increasingly difficult in our politically charged society.

Push back against anti-police rhetoric with Grassfire's exclusive "I Support The Thin Blue Line" ReStickers. These state-of-the-art, 3" x 9" bumper stickers can be applied and re-applied to virtually any smooth surface. Display them on your car, truck, van or SUV to share a pro-police message with your entire community.

Unfortunately, we only have a limited number of these "Thin Blue Line" ReStickers in stock and available for immediate FREE SHIPPING. Again, receive one for ANY AMOUNT, two for $25 or five for $35. Go here to order now.

Finally, your purchase helps Grassfire continue to defend America's founding principles of life, liberty and limited government. So thanks, in advance, for your support.

P.S. Every day, police officers put themselves in harm's way to protect and to serve. But too many of them are paying too high a price to "walk the thin blue line." If you believe in the men and women who wear a badge, take action to receive your "I Support The Thin Blue Line" ReSticker for a contribution of ANY AMOUNT. Click here or on the banner below now to receive this Grassfire "exclusive" when you help us build: