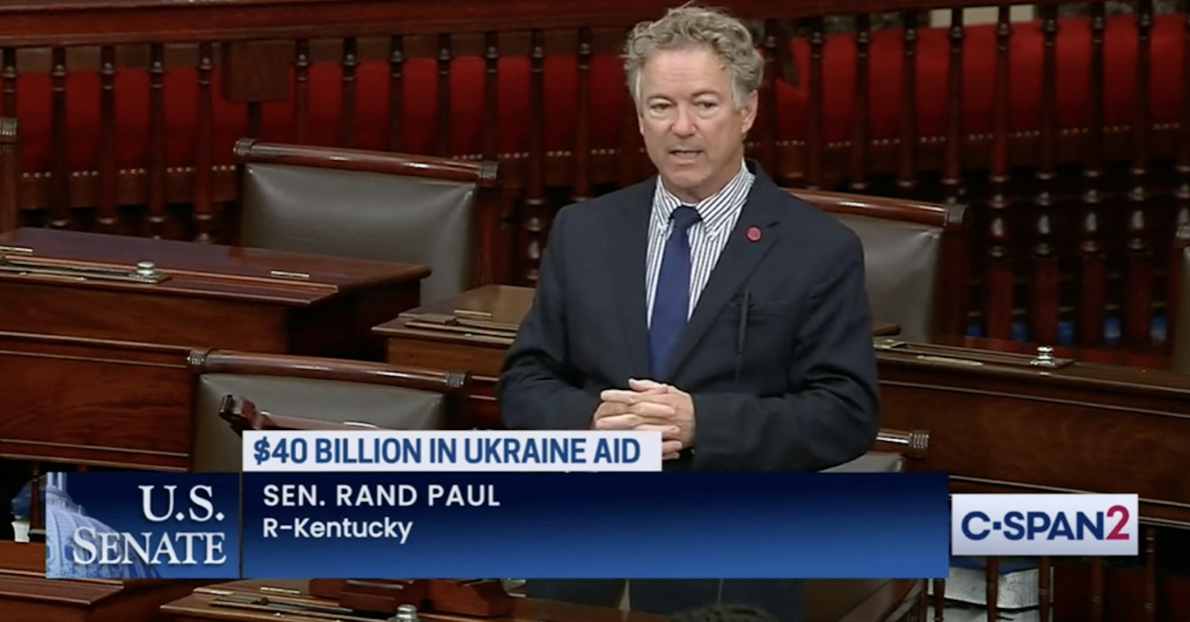 We want to make sure a busy weekend didn't keep you from reading Saturday's "Stop Protecting The Wrong Border!" update. The Senate is scheduled to vote TODAY on sending 40 BILLION MORE taxpayer dollars to Ukraine to fight a "proxy war" against Russia.

Only 57 Republicans in the House voted against the "emergency funding bill" that, apparently, is facing even less GOP opposition in the Senate. Last week, Grassfire explained how passing this legislation would bring the total U.S. aid package for Ukraine to a staggering $54 BILLION since March.

For perspective, the amount of money Congress could authorize for Ukraine this afternoon is TRIPLE the $18 BILLION President Donald Trump requested in 2018 for the border wall between the U.S. and Mexico!

Grassfire is empowering our team members to send "Stop Protecting The Wrong Border!" faxes to Capitol Hill BEFORE today's vote. With the Biden regime continuing to prioritize Ukraine over a laundry list of crises here at home (illegal immigration, inflation, gas prices, a baby-formula shortage and more), "America First" patriots MUST make their voices heard NOW!

Click here or on the banner below now to fax EVERY Republican Senator and two moderate Democrats -- Sen. Kyrsten Sinema of Arizona and Sen. Joe Manchin of West Virginia. For just $30, you can demand they tell Joe Biden to SECURE the U.S. border BEFORE spending $40 BILLION more taxpayer dollars to defend Ukraine:

Grassfire condemns the Russian invasion of a sovereign nation, and we recognize the need to help provide urgent humanitarian aid to Ukraine. But as an American taxpayer, you can support the Ukrainian people, criticize Russia and STILL demand Joe Biden protect our border, too.

Right now, Sen. Rand Paul (R-KY) is the only strong voice of reason AGAINST this massive taxpayer-funded giveaway in the Senate. Please see our previous email below to learn more about the case Paul made to provide congressional oversight for how and where all that money will be spent.

If you think Joe Biden and Congress should have a plan to deal with crises at home BEFORE sending TENS OF BILLIONS of taxpayer dollars to Ukraine, click here to fax Senators now. Tell them to protect America's security, sovereignty and way of life. Thanks, in advance, for making your voice heard.

P.S. On Wednesday, The Associated Press wondered if the Russia-Ukraine conflict was an "unwinnable war" that, so far, "showed little sign of a decisive military victory for either side and no resolution in sight." AP quoted a retired U.S. diplomat who predicted, "Ukraine would be a festering sore in the middle of Europe." Click here or on the banner below to fax Senators BEFORE today's vote! Demand they "Stop Protecting The Wrong Border!" now:

Grassfire has received word from Senate Minority Leader Mitch McConnell's (R-KY) office that the Upper Chamber will vote Monday afternoon on giving $40 BILLION MORE in taxpayer funds to Ukraine. That would raise the total U.S. contribution in weapons and humanitarian aid to $54 BILLION since March. What's even more shocking is that the GOP is largely supporting this giveaway to help the Ukrainians fight what amounts to a "proxy war" with Russia.

This ridiculously irresponsible "emergency funding bill" would have already passed if it wasn't for Sen. Rand Paul (R-KY). He blocked a unanimous-consent vote on Thursday, insisting an amendment be added to track how those BILLIONS of taxpayer dollars are spent in Ukraine. Speaking on the Senate floor, Paul made it clear he serves America FIRST:

"Americans are feeling the pain, and Congress seems intent only on adding to that pain by shoveling more money out the door as fast as they can. ...

"The biggest threat to the United States today is debt and inflation and the destruction of the dollar. We cannot save Ukraine by killing our economic strength."

Paul also asked, "In an attempt to save Ukraine, will we doom the United States?" Donald Trump Jr. seems to think so. He responded to the BILLIONS in additional aid to Ukraine by tweeting:

.@RandPaul simply wanted an inspector general to oversee how $40 billion of your taxpayer dollars are being spent in Ukraine and the swamp went nuts. They don't want transparency because it's one giant kickback to their friends and Big War. I hope you're awake & watching!

Do you want Senate Republicans to BLOCK the $40 BILLION "emergency funding bill" until Americans get a commitment from the Biden regime to protect America's border first? If so, Grassfire is empowering you to make your voice heard! Tell Senators that you demand Joe Biden defend American interests before spending TENS OF BILLIONS to finance his proxy war with Russia.

Click here to fax Senators on Capitol Hill BEFORE tomorrow's possible vote. Demand they call on the Biden regime to "Stop Protecting The Wrong Border!" If you can, please "go the extra mile" by choosing LEVEL TWO faxes to reach EVERY member of the United States Senate -- 100 faxes -- at a 50% discount! (For a complete list of FaxFire targets and contact information, click here.) Thank you, in advance, for making your voice heard.