Sen. Rand Paul: "Look at the evidence and decide for yourself" 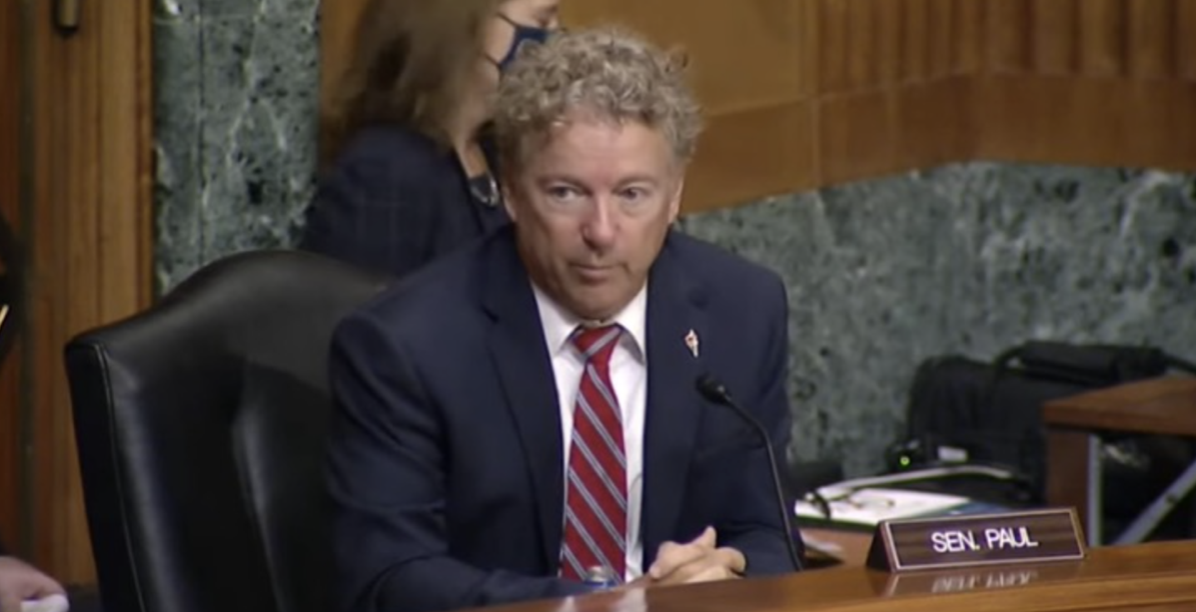 More high-profile Republicans are pushing back against claims by Big Tech and FAKE NEWS that Joe Biden won the presidential election. On Sunday, Sen. Rand Paul (R-KY) questioned the legitimacy of the 2020 vote in a tweet:

Interesting . . . Trump margin of "defeat" in 4 states occurred in 4 data dumps between 1:34-6:31 AM. Statistical anomaly? Fraud? Look at the evidence and decide for yourself.

Then, in a little "dig" against the Overlords of Silicon Valley, Paul added: "That is, if Big Tech allows u to read this". (As of yesterday afternoon, the Senator's post had not been silenced by the "Twitter Police.") Paul's tweet also included a link to an article by Vote Integrity called "Anomalies in Vote Counts and Their Effects on Election 2020". It focuses on irregularities in three states. Here's an excerpt:

In the early hours of November 4th, 2020, Democratic candidate Joe Biden received several major "vote spikes" that substantially — and decisively — improved his electoral position in Michigan, Wisconsin, and Georgia. Much skepticism and uncertainty surrounds these "vote spikes." Critics point to suspicious vote counting practices, extreme differences between the two major candidates’ vote counts, and the timing of the vote updates, among other factors, to cast doubt on the legitimacy of some of these spikes.

Michigan, Wisconsin and Georgia account for a total of 46 electoral votes. If election fraud is proven in just those three states, the President would have 278 electoral votes, which is eight more than he needs for re-election. The 37 electoral votes from three other states at the center of the "Stop The Steal!" fight -- Arizona, Nevada and Pennsylvania -- would become irrelevant.

Grassroots patriots MUST keep fighting to urge GOP leaders, like Sen. Paul, to support Mr. Trump and his legal team. Take action now to demand House and Senate Republicans expose any and all voter fraud utilizing Grassfire's "Stop The Steal!" FaxFire. Click here or on the banner below now to fax your personalized message to all 53 GOP Senators AND 16 battleground-state legislators for just $30:

Go the "extra mile" by choosing LEVEL TWO of the "Stop The Steal!" FaxFire and also reach House Minority Leader Kevin McCarthy (R-CA), Minority Whip Steve Scalise (R-LA) and ALL 37 members of the House Freedom Caucus for just $20 more. Click here to send 108 faxes to lawmakers for only $50. That's less than $.50 each

Democrats, Big Tech and FAKE NEWS don't decide who the president will be. We, the People choose our Commander-in-Chief! COVID-19 opened a HUGE "Pandora's Box" of problems for America: physically, socially, economically, politically, etc. But, from the very beginning, the Unhinged Left saw the pandemic as an "opportunity."

They want Americans hiding in our homes, locked out of our churches and forced to march in lockstep with their God-less, socialist ideals. Radical Democrats want us to wear a mask, hand over our Bibles and our guns, and to rely on the government to run EVERY aspect of our lives.

A Trump re-election is the key to ending their tyranny. American patriots like you, know that -- and so do the socialists, Marxists and communists. That's why they've been fighting so hard over the past four years to defeat Donald Trump. This is another battle the President needs your help to win!

Click here to fax lawmakers now -- for less than $.50 each! Thanks, in advance, for taking action today.

P.S. If you missed yesterday's "Stop The Steal! update, please click here to find out what Newt Gingrich said this past week about "the biggest Presidential theft... since 1824." If you did read last night's email and want to take immediate action to support President Trump, click here or on the banner below to schedule your "Stop The Steal!" faxes for instant delivery: