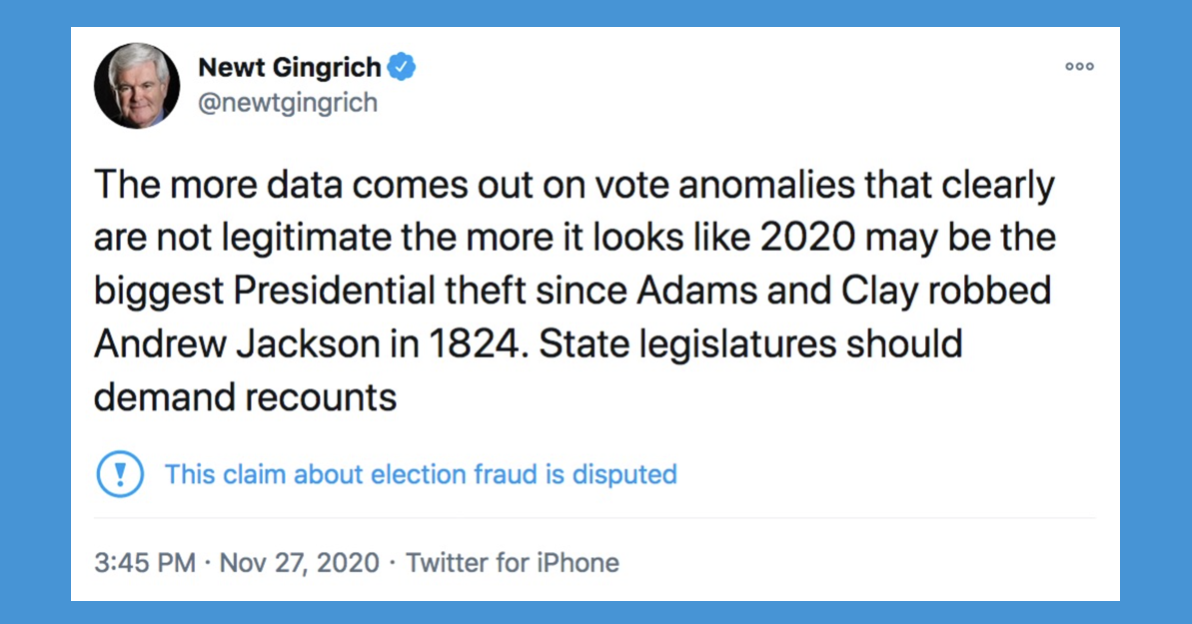 Since Election Day, former Speaker of the House Newt Gingrich (R-GA) has questioned the legitimacy, integrity and transparency of the 2020 vote. He has called the alleged corruption "unprecedented" and urged grassroots patriots "to get MAD... and FIGHT for America's future."

Gingrich continues to serve on the front line in the battle to "Stop The Steal!" On Friday, the Georgia Republican again came to the President's defense. He posted this on his Twitter feed:

The more data comes out on vote anomalies that clearly are not legitimate the more it looks like 2020 may be the biggest Presidential theft since Adams and Clay robbed Andrew Jackson in 1824. State legislatures should demand recounts

Of course, Big Tech saw fit to qualify Gingrich's historically based observation with one of their ridiculously one-sided "fact checks." His tweet included the "dreaded" blue exclamation point, which stated: "This claim about election fraud is disputed." Whatever.

A day later on Twitter, Gingrich doubled down, saying: "Every Republican state legislator should... demand an oversight committee to review their state’s vote." He insists that analysis of voting data "makes clear the election was almost certainly stolen in 5 states. Every American should be worried by the theft."

A recent poll by Politico found that 79% of Trump voters think the 2020 election was stolen through illegal voting and fraud. If you agree, Grassfire invites you to take immediate action to "Stop The Steal!"

Our unique FaxFire system targets 16 legislators in four battleground states (Georgia, Michigan, Pennsylvania and Wisconsin) and all 53 Republicans in the United States Senate! Click here or on the banner below now to instantly fax YOUR personalized "Stop The Steal!" message to 69 lawmakers for ONLY $30:

The Senate is back in session TODAY and House members return to Capitol Hill on Wednesday. Utilize Grassfire's "Stop The Steal!" FaxFire to instantly send your personalized message to lawmakers in support of President Trump.

Again, your "Stop The Steal!" faxes target 16 legislators in four key battleground states: Georgia, Michigan, Pennsylvania and Wisconsin. For just $30, you can instantly send a personalized message to them AND to EVERY Republican in the U.S. Senate. That's 69 faxes for just $.44 each!

This special FaxFire is more than 50% off our regular price! Go the extra mile by choosing LEVEL TWO for only $50. You'll also reach House Minority Leader Kevin McCarthy (R-CA), Minority Whip Steve Scalise (R-LA) and ALL 37 members of the House Freedom Caucus. That's 108 faxes in all!

Even if you've faxed before, please consider taking action again to reach lawmakers for less than $.50 each. (Click here to see a complete list of FaxFire targets and their contact info.)

Grassroots patriots MUST keep fighting to urge GOP leaders to support Mr. Trump and his legal team. Take action now to demand House and Senate Republicans expose any and all voter fraud. Thank you, in advance, for standing with America's Commander-in-Chief today.

P.S. The COVID-inspired, vote-by-mail scams that Democrats insisted on months ago have brought America to where it is now -- on the brink of a stolen election! The Republican-controlled Senate, GOP leaders in the House, and these 16 state legislators MUST take immediate action! Liberty-loving Americans can't let the radical, unhinged Left get away with robbing Donald Trump of his second term! Click here or on the banner below now to fax your personalized message to 16 battleground-state legislators AND all 53 GOP Senators for just $30: