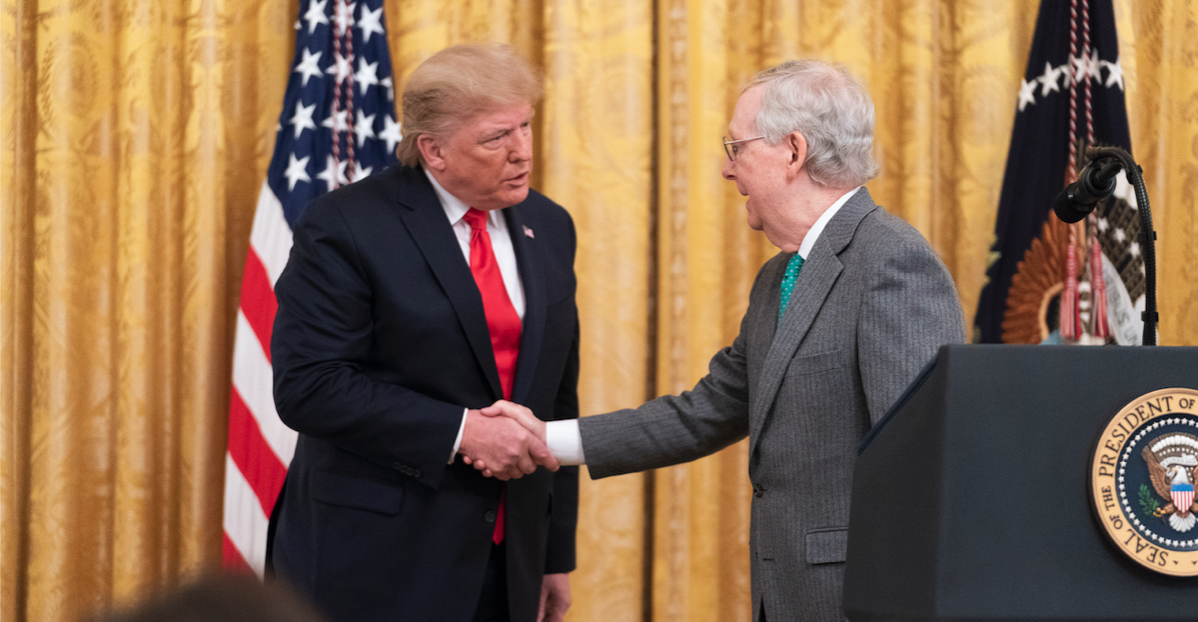 Bloomberg Politics reports that Senate Minority Leader Mitch McConnell (R-KY) is telling his GOP colleagues that their impeachment vote is "a matter of conscience." In addition to NOT pushing Republicans to acquit President Trump, Bloomberg claims that McConnell might vote to convict:

(S)enators who disputed the constitutionality of the trial could still vote to convict the former president, according to three people familiar with his thinking.

The Kentucky Republican has also suggested that he hasn’t made up his mind how he’ll vote, two of the people said, even though he voted Tuesday to declare it unconstitutional for the Senate to hear the case against a former president.

President Trump supporters can only hope this is more FAKE NEWS from the left-wing media. On January 12, The New York Times reported that McConnell "believes President Trump committed impeachable offenses and that he is pleased that Democrats are moving to impeach him, believing that it will make it easier to purge him from the party."

But, as Bloomberg notes above, McConnell has already voted TWICE that the Senate impeachment trial is unconstitutional. Still, as we told you in this morning's update (see below), it is concerning that one GOP Senator has already flip-flopped on the trial. Could more follow, including the Senate Minority Leader?

Grassfire is empowering our team members to make their voices heard with our "Reject The Impeachment Witch Hunt!" FaxFire. Demand all 50 GOP Senators -- including McConnell -- vote "NO!" on convicting President Trump.

Click here or on the banner below now to immediately fax your personalized message to EVERY Republican in the U.S. Senate for only $30:

Again, this McConnell report could be FAKE NEWS. But can pro-Trump patriots afford to take that chance? To impeach America's 45th president, Senate Democrats need 17 Republicans to vote for a conviction. You can help make sure that doesn't happen by taking action now. Thanks, in advance, for your support.

P.S. If you missed this morning's update, you can see it here. Find out which GOP Senator voted AGAINST the trial before voting FOR it yesterday. Click here or on the banner below to demand all 50 Senate Republicans "Reject The Impeachment Witch Hunt!" of President Trump: