Gingrich: "The fix is in" 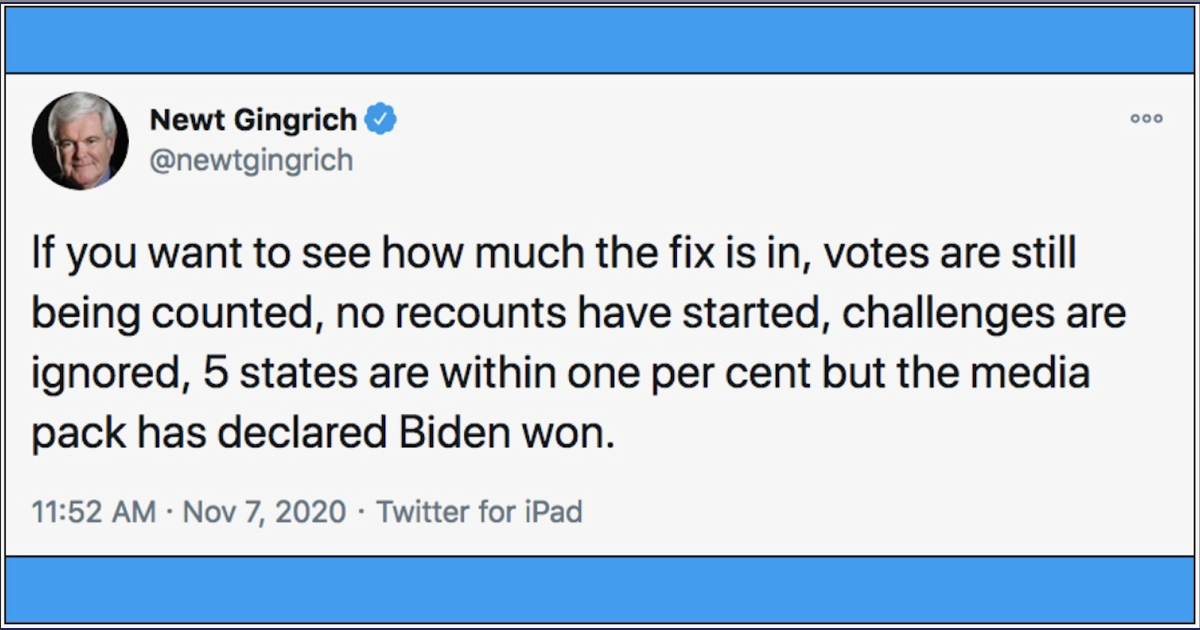 Since Election Day, former House Speaker Newt Gingrich (R-GA) has been a frontline attacker in the fight against radical Democrats trying to steal the 2020 vote. On Twitter yesterday, he reacted to the media's FAKE NEWS declaration that Joe Biden is the "president elect":

If you want to see how much the fix is in, votes are still being counted, no recounts have started, challenges are ignored, 5 states are within one per cent but the media pack has declared Biden won.

Gingrich understands that states certify elections, not news organizations -- especially those working in lockstep with Democrats in an attempt to bolster their preferred candidate. Last week, the former Speaker showed he was "on the tip of the spear" in this battle when he told Sean Hannity on FOX News:

Gingrich added that he's "tired of corrupt left-wing Democrats" thinking Republicans are "too timid" to fight back against blatant attempts to steal an election. After the response we've seen over the past six days, it's obvious that Grassfire Nation is ready to fight for President Trump and for the integrity and legitimacy of this election!

That's why we're continuing to empower our team members to demand GOP lawmakers take strong, decisive action to "STOP THE STEAL!" Click here or on the banner below to fax your personalized message to EVERY Republican Senator (53 in all) for just $30:

On Friday, we urged our team members to flood Capitol Hill with 10,000 "Stop The Steal!" faxes THIS WEEKEND. Click here to help send a tsunami of personalized, pro-Trump messages to House and Senate offices in Washington, D.C.!

Take action now to deliver a wake-up call to Republicans when they see your faxes tomorrow morning. Demand they start working immediately to defend your President and your vote. Thanks, in advance, for taking action.

P.S. The Democrats' "Stop The Steal!" efforts aren't just limited to the White House. Now, GOP control of the Senate is also at risk! Take action now! Click here or on the banner below to schedule your faxes for immediate delivery on Capitol Hill:

P.P.S. If you haven't voted in our new "Trump: What's Next?" QuickPoll yet, please click here. Join nearly 10,000 other Grassfire team members who are making their voices heard.