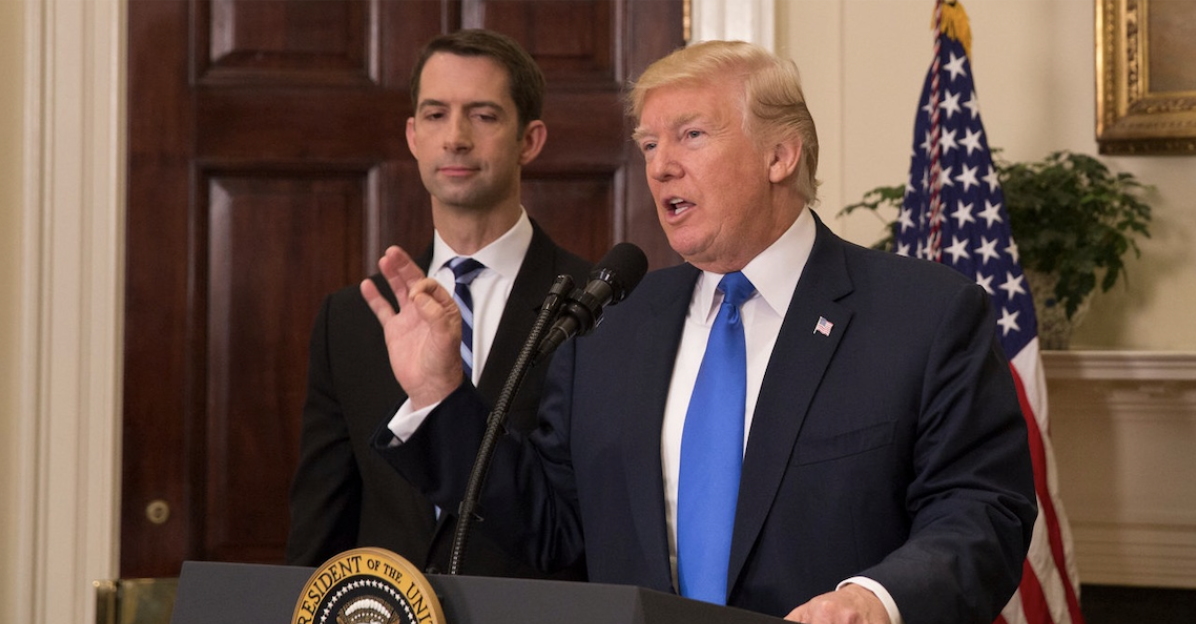 While Democrats are giddy over having impeached President Trump for a second time yesterday, at least one Republican insists an impeachment trial held after the Commander-in-Chief leaves office is unconstitutional. A few hours after the 232-197 House vote, Sen. Tom Cotton (R-AR) released a statement that read, in part:

"(T)he Senate lacks constitutional authority to conduct impeachment proceedings against a former president. The Founders designed the impeachment process as a way to remove officeholders from public office—not an inquest against private citizens."

In calling for "fidelity to the Constitution," Cotton also noted that, according to rules and precedents, the Senate "cannot start and conclude a fair trial before the president leaves office next week." If you agree with the junior Senator from Arkansas and "oppose impeachment proceedings against a former president," we encourage you to make your voice heard.

To help our team members fight back against this new attack against the President, Grassfire launched the "Stop The Purge!" FAXFIRE. Send your personalized, anti-impeachment message directly to Senators. If you're outraged by efforts to remove Mr. Trump from office and the overall PURGE of patriotic Americans, then go here to take a stand and send your faxes now:

The effort by Speaker Pelosi, Senate Majority Leader Chuck Schumer (D-NY) and others to impeach President Trump AGAIN is designed to ensure that America's Commander-in-Chief can't run for the White House in 2024. They don't want to just beat him. They want to bury the President and the "America First" political revolution he started.

But that's been their goal all along. From even before his inauguration, they worked to undermine and impeach America's duly elected Commander-in-Chief. There were violent riots on his Inauguration Day. They pushed a Russia-conspiracy hoax for three years. Then, when the President touched the "third rail" of Joe Biden's corruption in Ukraine, they impeached him.

Now, with only days left in his presidency, they want Donald Trump impeached AND purged. Click here to demand Senators take action to END IMPEACHMENT and STOP THE PURGE! American patriots, like you, MUST make their voices heard! Thanks, in advance, for standing with President Trump today.

P.S. If you missed last night's email summarizing the real reason behind the Democrats' second SHAM impeachment, which was supported by 10 RINO Representatives, please go here. Click here or on the "NO IMPEACHMENT!" banner now to immediately send your "Stop The Purge!" faxes to Capitol Hill: