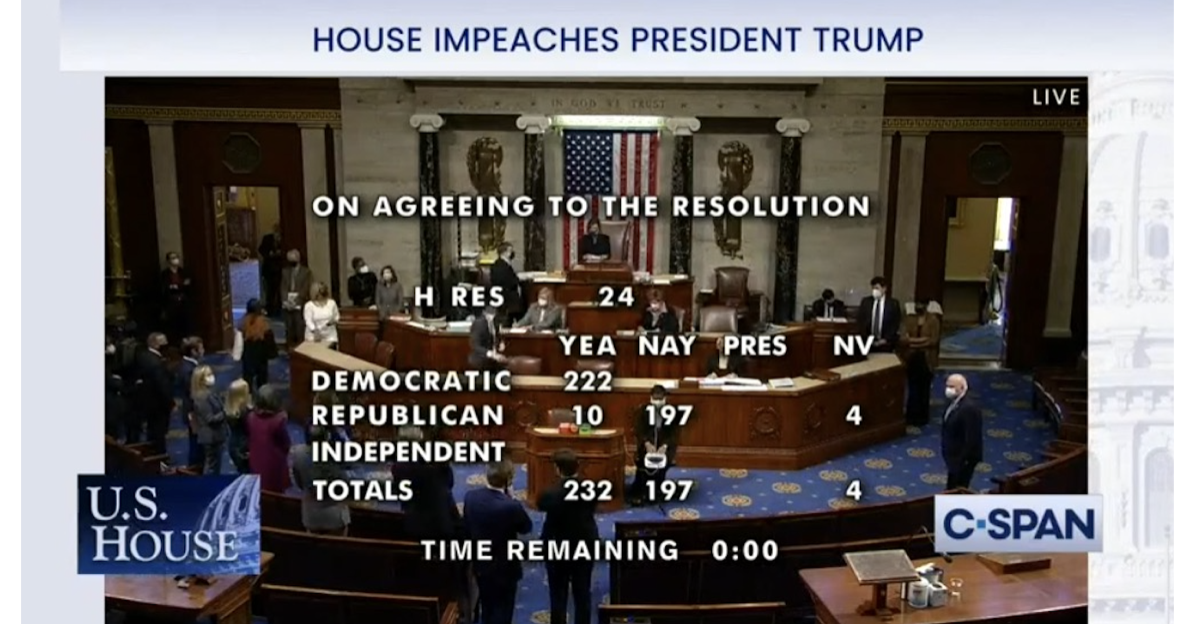 House Speaker Nancy Pelosi (D-CA) has another anti-Trump feather to stick in her cap. This afternoon, ten Republicans joined EVERY Democrat Representative to impeach President Trump AGAIN by a vote of 232-197. The trumped-up charge this time was "incitement of insurrection" for "willfully inciting violence against the government of the United States."

The Article of Impeachment claims the President "reiterated false claims that 'we won this election, and we won it by a landslide'. He also willingly made statements that encouraged—and foreseeably resulted in—imminent lawless action at the Capitol."

But America's Commander-in-Chief was still speaking nearly 20 minutes AFTER protestors breached the U.S. Capitol Building on January 6 and disrupted Congress' certification of Joe Biden's Electoral College "victory." Legal experts have warned that impeaching the President for a speech he made at a "Stop The Steal!" rally in Washington, D.C., sets a dangerous precedent against the First Amendment. But that didn't stop House Democrats and RINOs today.

This THIRD witch hunt of President Trump could lead to the showdown of showdowns in the "Upper Chamber." The 2020 Senate impeachment trial took three weeks before Mr. Trump was acquitted by a vote of 52-48 on the House's "abuse of power" charge and 53-47 on the charge of "obstruction of Congress."

Sen. Mitch McConnell (R-KY), who remains Majority Leader until later this month, is refusing to reconvene the Senate before January 19. That means a second impeachment trial could stretch into the first few weeks of Biden's presidency. In an email we received from McConnell's office shortly after the vote, the soon-to-be Senate Minority Leader stated:

"Given the rules, procedures, and Senate precedents that govern presidential impeachment trials, there is simply no chance that a fair or serious trial could conclude before President-elect Biden is sworn in next week."

But the REAL REASON behind this latest attempt to take down President Trump is to prevent him from running again and winning the presidency in 2024. That's the ENTIRE point of this second SHAM impeachment.

Senate RINOs could vote to impeach because they don't want President Trump dominating the GOP for the next four years, while Democrats are petrified that he could become president again on January 20, 2025. But the Senate CANNOT impeach the President without 17 Republican votes!

That's why we're asking Grassfire team members to start faxing the Senate now! Using our "Stop The Purge!" FaxFire, you can reach every GOP Senator with your personalized message for only $30. Click here or on the banner below to immediately fax 50 Republicans in the "Upper Chamber" for $.60 each:

We just updated our "Stop The Purge!" FaxFire to target EVERY Republican Senator -- up to 50 faxes in all. And to encourage every grassroots citizen to take action, we've discounted our LEVEL ONE FaxFire by 40%! Go the "extra mile" and choose LEVEL TWO of the "Stop The Purge!" FaxFire to reach the ENTIRE UNITED STATES SENATE. That's a total of 100 faxes for just $50 -- a 50% discount! Click here now.

+ + Patriotic Americans Must Stand With The President TODAY!

Radical Democrats, the Unhinged Left and Establishment Republicans are so afraid of "Trump 2024" that they want to PURGE the President and his supporters from the public square. Nevermind that 74 million Americans voted for him just ten weeks ago. Because our Commander-in-Chief and millions of pro-Trump patriots dared to question the results of a deeply flawed -- if not outright fraudulent -- election, they're being canceled, silenced and censored by Big Tech, FAKE NEWS and EVEN the Republican Party.

Did that happen to ANY Democrat who spent the past four years REFUSING to accept Hillary Clinton's defeat? Of course not.

Today's impeachment vote isn't about only purging President Trump. This is about purging YOU AND OTHER CONSERVATIVES -- anyone who dares to stand for the Constitution, for liberty and against the socialist/Marxist "great reset" of society that's under way. This is just the beginning if grassroots Americans don't take action to STOP THE PURGE right now -- starting with this outrageous effort to impeach President Trump.

That's why what happened in Congress today and what occurs over the next few weeks is so critical. If pro-Trump Americans sit by silently and do nothing, while they impeach the President, then the PURGE will never stop. Conservative thought will continue to disappear from social media. Trump supporters will be PURGED from having any voice on TV and radio. Conservatives could even be PURGED from being able to run for office. The "liberal mob" will PURGE you (and Americans like you) in every way possible.

Grassroots patriots must take a stand to STOP THE PURGE of President Trump! Radical Democrats, the Unhinged Left, the GOP Establishment, NeverTrump RINOs, the Deep State, the D.C. Swamp, FAKE NEWS and Hollywood's "elite" all want to PURGE the Commander-in-Chief, and then PURGE you. Click here to demand GOP Senators vote "NO!" on impeachment!

Again, we updated the FaxFire targets tonight to empower our team members to reach the ENTIRE United States Senate. So, even if you've sent "Stop The Purge!" faxes this week, please consider taking action again now. Thanks, in advance, for standing with President Trump today.

P.S. It's not enough that radical Democrats and the Unhinged Left ENGINEERED an election result. It's not enough that President Trump has conceded and will only be Commander-in-Chief for another week. This is about PURGING this president and the "America First" movement he represents. Mr. Trump and his supporters are such a fundamental threat to the oligarchs who rule Washington, D.C., Big Tech and FAKE NEWS that every remnant of this presidency must be fully REJECTED, DEFEATED, ERASED and even HUMILIATED by the hypocritical Left. Take a stand now by clicking here or on the banner below to send your "Stop The Purge!" faxes IMMEDIATELY to Capitol Hill: