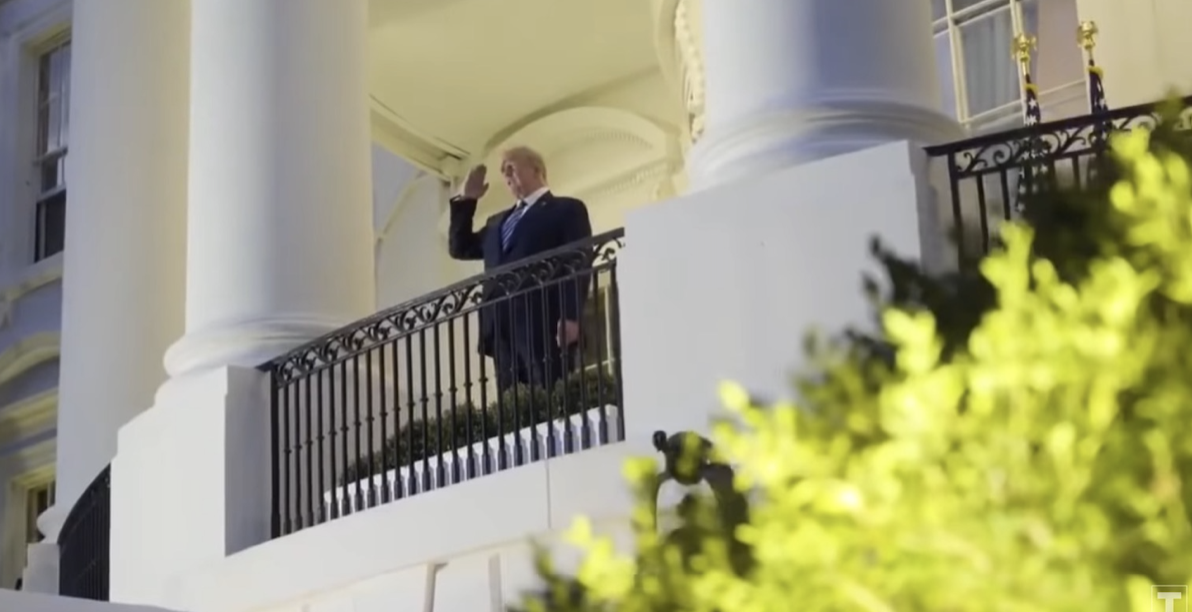 America's Commander-in-Chief made what can only be described as a triumphant return to the White House last night. (See the dramatic and inspiring video here.) After receiving three days of treatment at Walter Reed Medical Center, doctors said the President had no fever, and his blood-oxygen levels were normal.

But the presidential physician warns that Mr. Trump is "not completely out of the woods yet." The Wall Street Journal reports, "He enters a dangerous second-week period during which patients with Covid-19 can quickly worsen."

As a result, the Commander-in-Chief needs to remain in the White House and be closely monitored in case his symptoms return or get worse. But Dr. Sean Conley added, "(H)is clinical status support the president’s safe return home where he’ll be surrounded by world-class medical care 24/7."

But the President and First Lady aren't the only ones at the White House battling virus. Several staff members and others close to the Trumps have tested positive for COVID-19. With less than four weeks until Election Day, the First Family needs the prayers of a faithful nation behind them.

Just because the President left the hospital, that doesn’t mean we’re going to stop praying for him, the First Lady and their family and friends. In fact, with the election now just four weeks away, we’re going to double down on this Grassfire prayer initiative! We now want to see 20,000 patriotic Americans praying for the First Family and White House staff — every day — from now until November 3!

If you think the attacks against the Trumps were bad before, just wait. Now that he’s winning his battle against COVID -- and exposed the FAKE NEWS FEARDEMIC as the fraud that it is -- the Unhinged Left is sure to attack the President, his family and his supporters like NEVER before!

That's why Grassfire is continuing to urge our team members to keep praying for God to heal and fully restore Mr. and Mrs. Trump. We're also giving you the opportunity to tell the President and First Family that they're in your prayers. Our goal is to see 20,000 team members take action by the end of THIS WEEK.

Click here or on the banner below to sign the "I'm Praying For The President And First Family" Statement of Support. Tell the Trumps that you're praying for them this election season:

NEW! Click here for Grassfire's top news headlines
Including Steve Elliott's "Why Trump Will Win" analysis
Again, in response to the coronavirus outbreak and other possible threats to the President, First Lady, their family and White House staff during the remainder of the campaign, Grassfire is "doubling down" on our "I'm Praying" initiative. We're looking for 20,000 team members to add their names to our national Statement of Support.

After reaching that goal, we'll deliver your signature and thousand of others to the White House. Please help by sharing this message and by continuing to pray for the President and First Family. Thanks, in advance, for taking action today!

P.S. Don't forget to click here to see the video of President Trump's triumphant return to the White House. Also, when you sign, please consider leaving a word of encouragement for the President and First Lady. We'd love to see thousands of positive, uplifting and inspiring comments for Mr. and Mrs. Trump. When Grassfire reaches 20,000 "I'm Praying" signers, we'll deliver this national Statement of Support to the White House. Go here to add your name now: