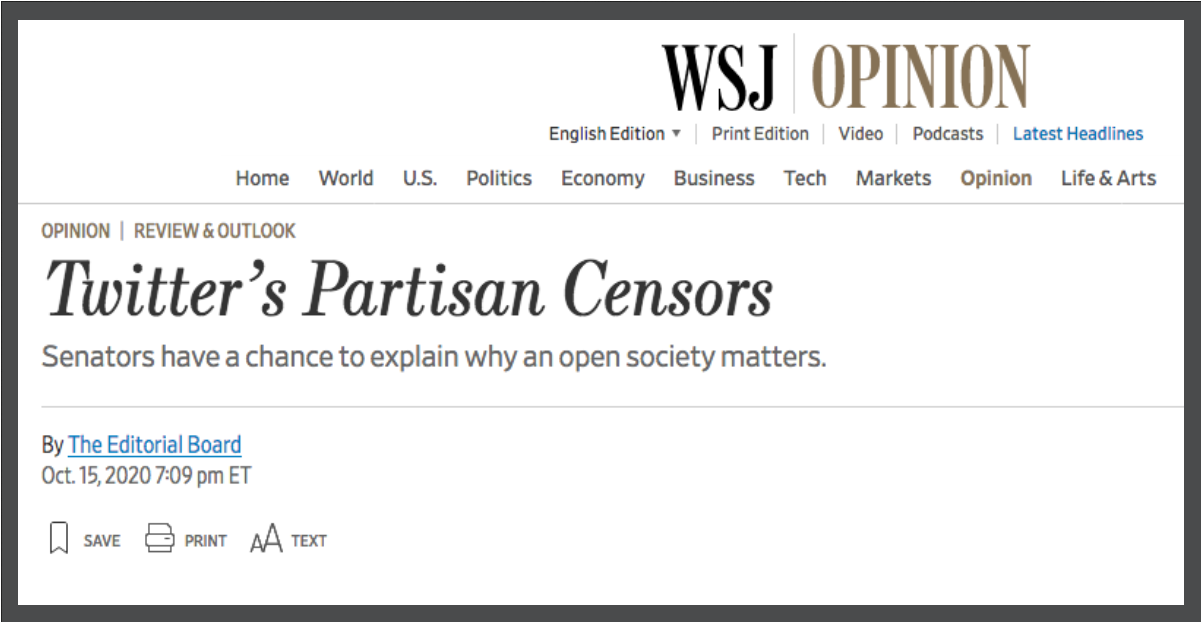 The Wall Street Journal has weighed in on social-media censorship. In an opinion article entitled "Twitter's Partisan Censors", the newspaper's editorial board agrees with Republican-led efforts to call Big Tech CEOs to Capitol Hill later this month. In addition to calling Twitter's actions earlier this week an "unprecedented speech blackout," The Journal also stated:

This is the right call on a serious issue, and we hope the Senators come prepared to persuade the American people, not grandstand. Big Tech’s increasingly dishonest and abusive assaults on ideas it dislikes will intensify unless the public comes to see that such manipulation is wrong no matter which side is targeted. The political actions taken Wednesday by Twitter — and to a lesser extent Facebook — went far beyond normal content moderation.

Last night, Grassfire released our new "Censorship? QuickPoll" to find out what our team members think. Do you agree with The Wall Street Journal? Did "Twitter pre-emptively sprang to the defense of the Democratic nominee, taking extraordinary steps to stop Americans from reading" a potentially damaging New York Post article?

The CEOs of Twitter and Facebook are in a bit of hot water with GOP Senators and have been called to testify in our nation's capital. Both social-media companies censored a New York Post story this week that contained information detrimental to Democrat presidential candidate Joe Biden.

Twitter locked the account of America's fourth largest newspaper, as well as several users who shared the bombshell article. Facebook announced "(W)e are reducing its distribution on our platform." To many, it appeared to be an Orwellian, knee-jerk response to protect Big Tech's preferred candidate.

The outrage over the latest example of blatant social-media censorship had most conservatives claiming that Silicon Valley "elites" were engaging in election interference. Many on the Left claimed the story wasn't fully verified, contained "hacked" information, and needed to be fact-checked before releasing it to a wider audience.

Unfortunately, President Trump wasn't afforded similar professional considerations or courtesies regarding the Russia-collusion hoax, the bogus Steele dossier, his leaked tax returns and other media misinformation campaigns against him. That's why Grassfire wants to know what you think. Is Congress justified in taking action to stop social-media censorship?

Please make your voice heard in our "Censorship? QuickPoll" now. If you support Republican-led efforts to have the CEOs of Twitter and Facebook testify before the Senate Judiciary Committee, click here or on the "YES!" image below. If you prefer to see Congress have a more "hands off" approach with Big Tech, click here or on the "NO!" image below.