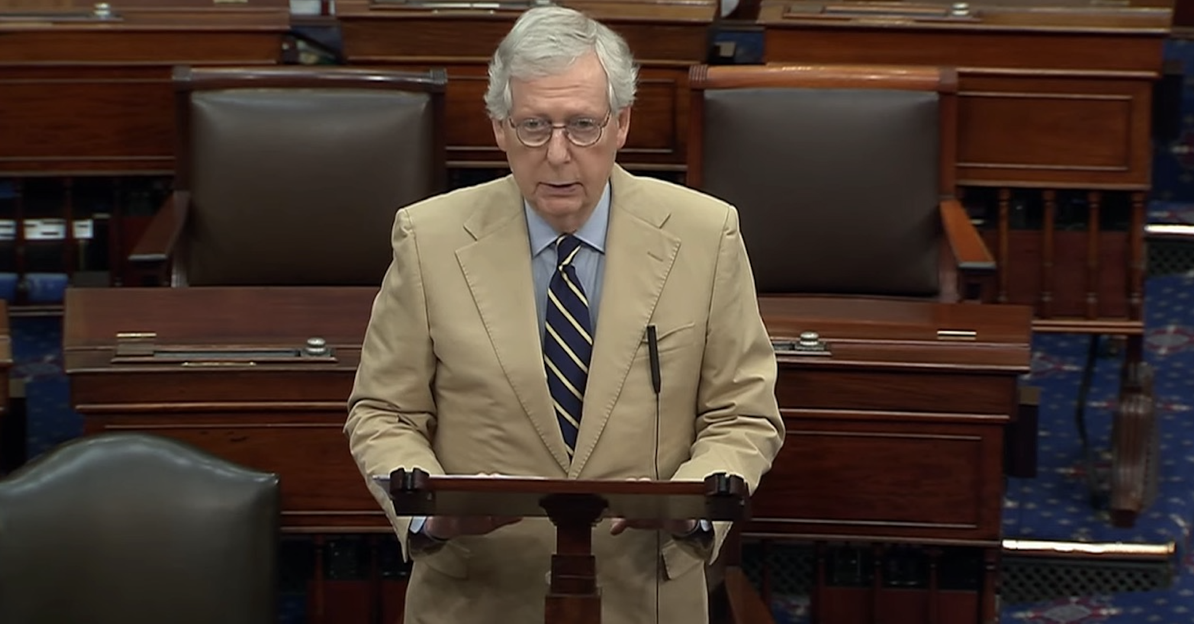 Senate Minority Leader Mitch McConnell (R-KY) blasted radical Democrats and the woke, unhinged Left on the floor of the Upper Chamber yesterday. He insisted that their meltdown over the possibility that power to regulate abortion will be returned to the states has fueled a "hysterical, potentially dangerous climate." McConnell also said:

"Since the precedent-smashing leak of a draft opinion last week, the left has set out to harass and intimidate sitting Justices as they consider a pending case. We have seen angry crowds assemble at judges’ private family homes. Activists published a map of their addresses. ...

"Trying to scare federal judges into ruling a certain way is far outside the bounds of normal First Amendment speech or protest. It is an attempt to replace the rule of law with the rule of mobs. It appears this may possibly be flat-out illegal. There is a federal law on the books that criminalizes 'pickets or parades' with 'the intent of influencing any judge, juror, witness, or court officer' at locations that include a judge's 'residence.'"

Then, the Minority Leader got to the root of his leftist colleagues' intentions: "Democrats are renewing their calls to break the Senate in order to pack the Court. They want to destroy two institutions for the price of one." McConnell is absolutely right!

Senate Majority Leader Chuck Schumer (D-NY) knows he doesn't have the support of 60 Senators to "save" Roe v. Wade and federalize abortion on demand across the country. But when his vote fails tomorrow, Schumer will, very likely, call for an end to the Senate filibuster, which requires a super majority to pass most legislation.

That's why Republicans MUST stay united and stand strong in the face of tomorrow's Senate vote to "codify" the landmark 1973 decision that created a so-called "right" to killing the unborn. Wednesday's Senate vote is the latest battle in the fight to "End Abortion In America!" Schumer and the Biden regime are on a quest to protect the so-called "right" to abortion before the horrific, landmark 1973 decision is likely to be overruled by the Supreme Court.

Unless a significant number of Republicans cave, Schumer will NOT have the votes to pass the Democrats' Senate bill to "codify" Roe v. Wade and make abortion-on-demand legal in all 50 states. Take action to "End Abortion In America!" by sending a personalized message to Capitol Hill now using Grassfire's unique FaxFire system. Make your voice heard and demand Senators vote "NO!" tomorrow on S.4132, the Women's Health Protection Act.

Click here or on the banner below now to instantly send your "End Abortion In America!" faxes to EVERY Republican Senator and two key "moderates" -- Sen. Joe Manchin (D-WV) and Sen. Bob Casey (D-PA) -- on Capitol Hill:

👉 ATTENTION GRASSFIRE VIPS: GO HERE TO SIGN IN AND SEND YOUR "END ABORTION IN AMERICA!" FAXES FOR 80% OFF! Not a VIP? Go here to send this fax at an 80% discount. (Having trouble accessing your VIP benefits? Click here.)

On Thursday, Justice Clarence Thomas said of the Supreme Court: "We can't be an institution that can be bullied into giving you the outcomes you want. The events from earlier this week are a symptom of that."

By targeting the Justices and fighting to preserve the "right" to kill unborn and newly born babies, the woke, unhinged Left has, once again, shown their true colors. Many radical Democrats want laws allowing them to terminate their pregnancies until the moment of birth -- and even shortly after!

The release of the Supreme Court's draft document last week emboldened the radical, unhinged Left to intensify their fight to continue killing unborn and newborn babies. Sadly, Grassfire's prediction that Democrats will try to defend and expand abortion "rights," while also attacking the legitimacy of our High Court and the Justices themselves, has come to pass.

The meltdown over the possibility that the Supreme Court could overturn Roe v. Wade MUST STOP in the Senate. The radical, unhinged Left and FAKE NEWS are threatening to pass new abortion laws, to pack the court with left-wing justices, to "impeach" the current Justices and more. Click here to tell Senators: "Vote 'No!' on Chuck Schumer's abortion bill next week."

For just $30, you can fax EVERY Republican Senator and two key Senate Democrats -- Joe Manchin of West Virginia and Bob Casey of Pennsylvania -- who have previously opposed abortion on demand. Reach all 100 United States Senators with your "End Abortion In America!" message for only $50. (To see a complete list of FaxFire targets and their contact information, click here.) Thank you, in advance, for taking action today.

P.S. The U.S. is one of only seven countries that allow abortion after 20 weeks of pregnancy. The other six are Canada, China, Netherlands, North Korea, Singapore and Vietnam. In recent years, several "red states" have been trying to change that by prohibiting abortion after the preborn baby can feel pain or survive outside the mother's womb. Now, with the Supreme Court apparently set to overrule Roe v. Wade and return abortion regulation to the states, radical Democrats are furious and fighting back. Go here to tell Senators to vote "No!" next week on radical, far-left efforts to protect the so-called "right" to abortion: