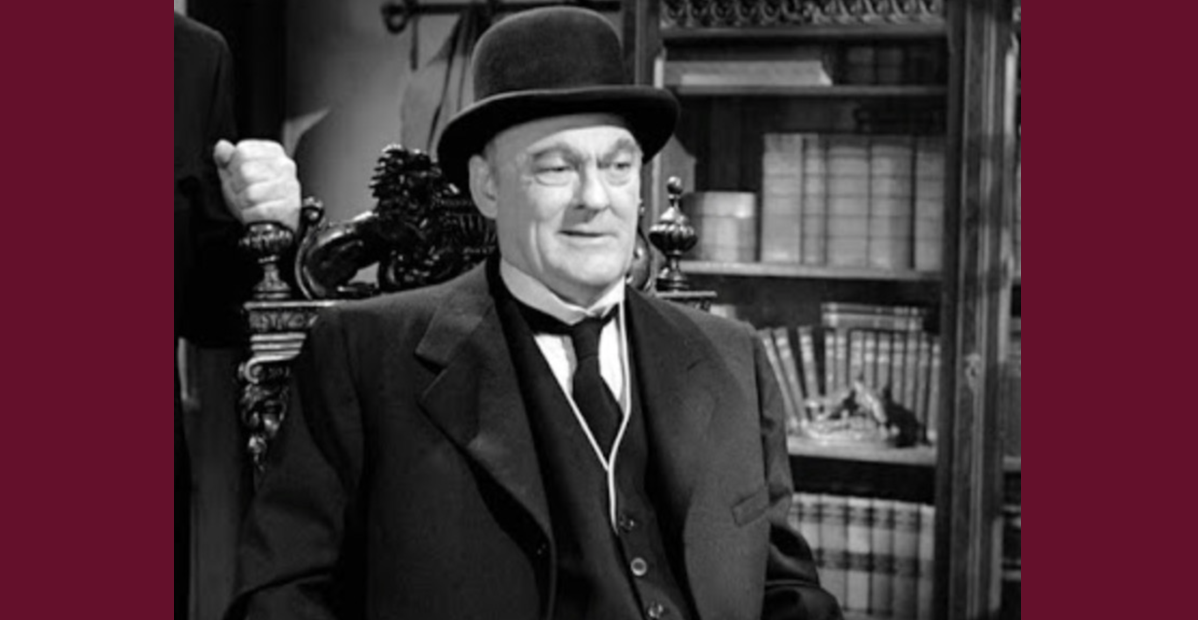 We seem to have struck a chord with "It's a Wonderful Life." Our recent messages have generated a great response from team members who also see the parallels between George Bailey and Grassfire. While those similarities might be a bit of a stretch, we love the classic film and what it stands for: faith, family and community. Those are three things evil Mr. Potter either couldn't have or didn't want.

Across the board, big social-media websites pretty much reject faith and the traditional family. Their idea of "community" is vastly different than what most of us grew up with. Honestly, think about the cesspools of negativity, vitriol and hate that Twitter and Facebook can be. Who would want to be part of a real-life community like that?

+ + Mr. Potter Knew What He Did To George Bailey And Didn't Care!

Getting back to "It's a Wonderful Life," the trouble started for George (Jimmy Stewart) after his Uncle Billy (Thomas Mitchell) "lost" an $8,000 bank deposit. Without thinking, he wrapped the cash in a newspaper and he gave it to Mr. Potter (Lionel Barrymore). Watch it here.

If you remember the scene, when the evil miser realized what happened, he had his henchman wheel him back to the door to watch Uncle Billy search frantically for the lost money. Potter said and did NOTHING!

Soon, George's life began to spin out of control. Potter let it happen and watched with glee -- even though he could have stopped it instantly. The "warped, frustrated old man," as George once called him, should have given back what rightly belonged to the Bailey Building & Loan. But Potter's hatred of George and what he stood for was far bigger than his sense of decency and fair play.

If you don't see yet how the lessons of this 1946 Christmas classic are applicable to today, please keep reading. We'll make it crystal clear.

As we stated previously, today's social-media giants often play the role of Mr. Potter. They want to control information in an attempt to control the people who need and use it. Take last week's "unprecedented speech blackout" by Twitter, as The Wall Street Journal called it, and Facebook's "far-beyond-normal content moderation."

The New York Post published and tried to share a bombshell article on social media that was sure to negatively impact the presidential campaign of Big Tech's preferred candidate, Joe Biden. The story has been authenticated and refuted as "Russian disinformation" by U.S. intelligence, but America's fourth-largest newspaper is STILL locked out of Twitter -- SIX DAYS LATER -- for refusing to remove their tweet.

It's as if, like Potter, Silicon Valley "elite" don't care about the truth or the impact that withholding information will have. But unlike in "It's a Wonderful Life," the real-life stakes are about much more than one man and his family.

Of course, like George Bailey, Donald Trump has much to lose due to Big Tech's possible election interference. But if Twitter and Facebook are allowed to continue censoring content they disagree with or simply don't like, that could have a huge impact on the future of the United States.

If Joe Biden and Kamala Harris get elected because of social-media shenanigans, their Marxist, open-borders, anti-police, anti-gun and anti-faith policies could turn the "American Dream" into a "Socialist Nightmare."

+ + Help Grassfire Empower You To Fight For Life, Liberty And Limited Government!

Grassfire has spent two decades fighting to support this great nation's founding principles of life, liberty and limited government. Our mission is to REPORT TRUTH and empower you to TAKE ACTION on key issues of our day. To paraphrase George Bailey, we're confident America "needs this measly one-horse institution if only to have some place where people can come without crawling to Potter" (Twitter and Facebook).

If you believe in Grassfire, we're asking you to prayerfully consider helping us remain a VOICE FOR TRUTH amidst the tidal wave of Big Tech CENSORSHIP on social media right now. Will you contribute $30, $50, $75, $100 or more today to help Grassfire reach millions before Election Day? If so, please go here: 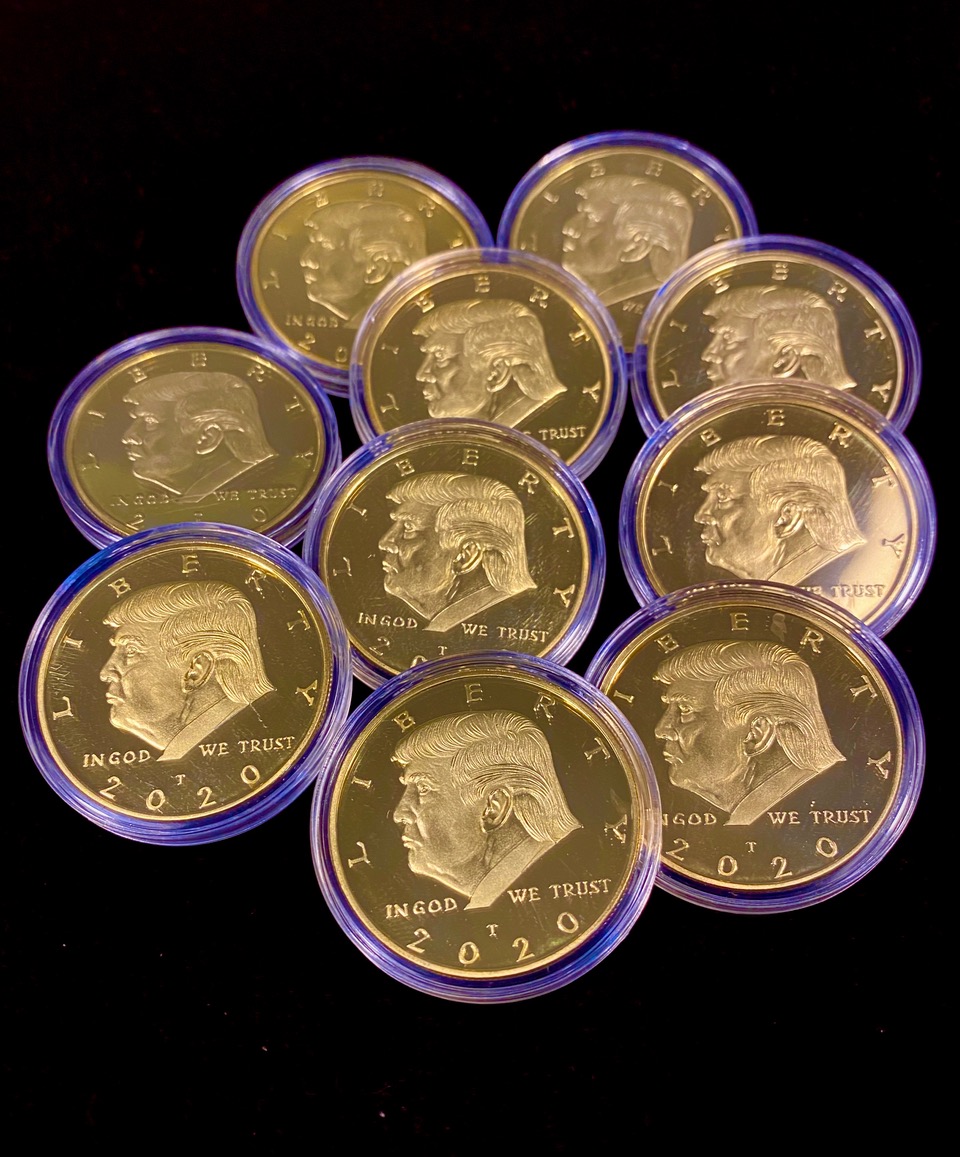 Before November 3, we want to launch new initiatives that empower our team members to push back against Big Tech's blatant censorship and possible election interference. If you can help Grassfire amplify YOUR VOICE, we'll send you our collectible "TRUMP 2020" Coins as our gift

While these unique commemorative coins have no cash value, one side features an image of President Trump with the words "Liberty," "In God We Trust" and "2020." The opposite side is emblazoned with the presidential seal and "Donald Trump 45th President of the United States." Each one comes in a protective plastic case, which makes them perfect to carry with you and share with family and friends.

As a small, media company that provides grassroots-activism services to our team members, we're willing to take on the "Mr. Potters" of our day. Like the fictional Bailey Building & Loan, Grassfire is a family-owned business with only a few employees. But each one is fiercely dedicated to defending America's founding principles of life, liberty and limited government.

Last week, Twitter AND Facebook revealed their blatant, censoring double standard -- again. Critics of these Big Tech, social-media giants are quick to point out that the "shadow banning," blocking and censorship that's become common place on there platforms seems to happen ONLY to conservatives.

Grassfire is fighting the good fight with our websites, on social media (as best we can) and through DIRECT CONTACT via daily emails. We're doing everything we can to push back against the lies and censorship. Our efforts to amplify YOUR voice are MORE IMPORTANT NOW THAN AT ANY TIME IN OUR HISTORY. Please help us continue fighting for your right to be heard on Capitol Hill and beyond. Click here.

The radical Left and their allies in the media and Silicon Valley are OPENLY CENSORING CONSERVATIVES LIKE YOU! That's why Grassfire's ongoing efforts are so critical. Please stand with us by contributing to our efforts today. Again, when you support our work with $30 or more, you'll receive three "TRUMP 2020" Coins as our gift. Thank you, in advance, for standing with us today.

P.S. We offer an alternative to the new-media and social-media monopoly. Grassfire is one of the few online, grassroots-citizen networks that has both the strength in numbers and the independent-minded commitment to make a difference in the battle to save America from political correctness and tyranny. And let's be clear -- in this election, we're fighting for the very soul of our nation. Few organizations in the country can inform and equip hundreds of thousands of citizens like Grassfire can. But we need your help through Election Day and beyond. Please, click here or on the banner below to support us with a contribution of $30 or more and receive three "TRUMP 2020" Coins as our gift. Shipping and handling are free:

We urgently need help THIS MONTH AND EVERY MONTH TO THE ELECTION! We recently launched our GRASSFIRE VIP program -- with exclusive discounts, benefits, resources, and access to our team. Would you consider becoming a VIP today? Everyone who becomes a VIP at $15 or more monthly between now and the end of October will receive 25 "TRUMP BUCKS" in addition to 80% off our FaxFire campaigns, our breakthrough VIP news digest and our exclusive VIP VIDEO BRIEFINGS. Go here to find out more and become a VIP: