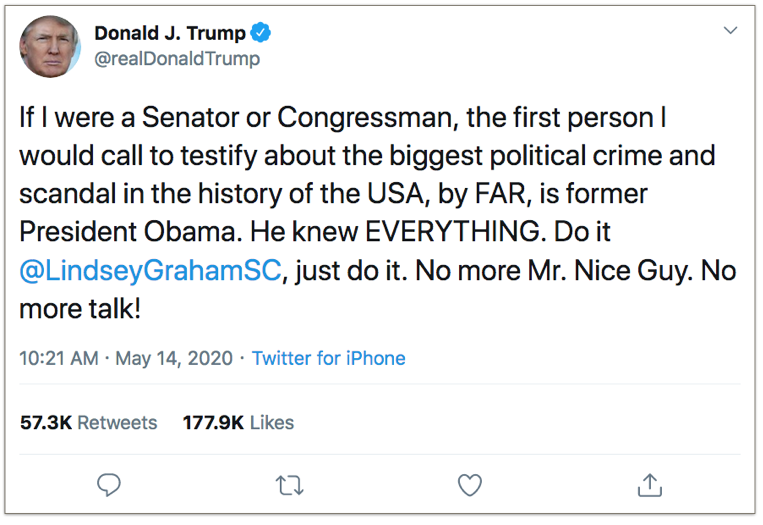 The ObamaGate scandal just got "real"! President Trump wants President Obama to testify -- and he's calling on Sen. Lindsey Graham (R-SC), chairman of the powerful Senate Judiciary Committee, to make it happen! In a tweet yesterday, the current commander-in-chief said:

If I were a Senator or Congressman, the first person I would call to testify about the biggest political crime and scandal in the history of the USA, by FAR, is former President Obama. He knew EVERYTHING. Do it @LindseyGrahamSC, just do it. No more Mr. Nice Guy. No more talk!

That's exactly what Grassfire has been empowering our team members to do all week: Demand answers! The best way to do that is through an ObamaGate investigation by the GOP-led Senate.

For 220 years, the United States enjoyed a peaceful transition of presidential power. Americans need to know if that ended in 2016. Did the former commander-in-chief play an active role in requesting or approving the surveillance of an incoming president and/or his staff?

Graham, who has subpoena power, have done little to nothing in terms of bringing these coup leaders to justice and helping Mr. Trump "drain the swamp." While the South Carolina senator has pledged for years to call witnesses to answer for their roles in the Obama-Clinton conspiracy, his promises have been nothing more than hot air and empty threats.

If you think the American people deserve a full investigation into the real Obama-Clinton, anti-Trump conspiracy, click here or on the banner below now to schedule your ObamaGate Faxes for immediate delivery to the offices of your Senators, Representative, Sen. Lindsey Graham and other key Senators on Capitol Hill:

American patriots MUST demand that the Republican-led Senate take action to expose this scandal. IT'S TIME TO INVESTIGATE OBAMAGATE! For just $15, you can reach your two Senators, your Representative, Sen. Graham, Senate Majority Leader Mitch McConnell (R-KY), and every GOP member of the Senate Judiciary Committee.

Back in 2019, Graham called rogue actions by federal agents: "Systematic corruption at the highest level of the Department of Justice and the FBI against President Trump and in favor of Hillary Clinton."

So what is he and other GOP lawmakers waiting for? Grassroots Americans must push Graham, McConnell and others to get to the bottom of the real collusion scandal.

ObamaGate must be exposed! Fax Sen. Graham and other key Senators now for just $15, or reach the entire U.S. Senate at a 50% discount! Demand accountability and call on Senators to take immediate action. Click here to schedule your personalized faxes now.

P.S. President Trump insists the Obama administration was "The most corrupt administration in U.S. history!" He could be right. Members of the outgoing administration are accused of trying to destroy a duly elected U.S. president -- even before he took office! Call on the GOP-led Senate to investigate President Obama and his "minions." Demand that anyone involved be prosecuted and punished. Go here to fax now: