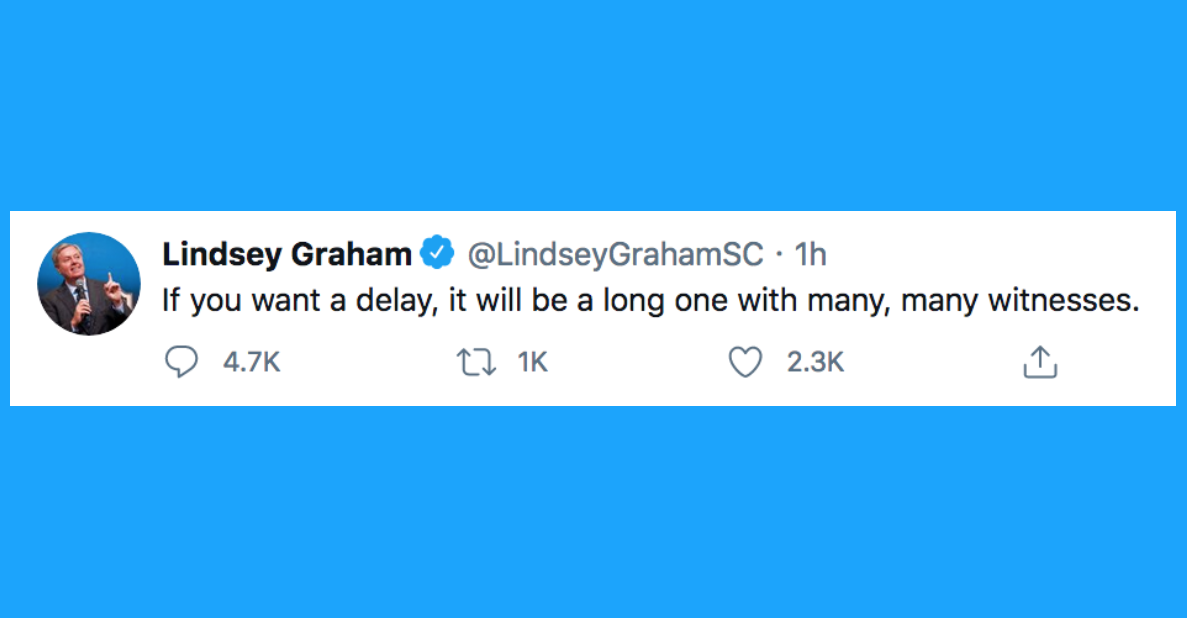 UPDATE (1:35 p.m. ET): In a stunning reversal, the Senate has backtracked on this morning's decision to call witnesses in President Trump's impeachment trail. Closing arguments have resumed, and a final impeachment vote is imminent! Click here to fax Senators now. Demand they vote "NO!" on impeachment! --Grassfire

This morning, the Senate surprisingly voted to extend President Trump's impeachment trial. Grassfire received an email update from the office of Senate Minority Leader Mitch McConnell (R-KY) explaining that the Senate would convene at 10:00 a.m. ET to continue the trial.

The schedule called for the Upper Chamber to enter into "two hours of discuss on the question to subpoena witnesses and other documents." McConnell's office said Senators could have chosen to abandon that debate and jump ahead to the trial's climax:

"If witnesses are not allowed, a very quick fast track to closing arguments and a vote on the article of impeachment could occur today" (emphasis theirs).

But that didn't happen. Instead, 50 Democrat and five Republican Senators voted to call witnesses and extend the trial. As of right now, no one knows for how long.

Four of the GOP Senators who sided with Democrats were no surprise. They were NeverTrump RINOs Sen. Susan Collins of Maine, Sen. Lisa Murkowski of Alaska, Sen. Mitt Romney of Utah and Sen. Ben Sasse of Nebraska.

The lone "shock" vote was Sen. Lindsey Graham (R-SC). It appears he voted "Yes" to give Democrats what they may not want. Shortly before today's vote, Graham tweeted: "If you want a delay, it will be a long one with many, many witnesses."

Forty-four Republicans have voted TWICE that the impeachment trial is unconstitutional. This morning, 45 GOP Senators voted against calling witnesses so the witch hunt would end today. Seventeen Republicans would need to break ranks today for a conviction, but no where close to that number has sided with Democrats so far.

If Republicans stand together and vote to acquit, Democrats have NO CHANCE of retroactively removing President Trump from office or preventing him from running for the White House again in 2024. That's why Grassfire is empowering our team members to make their voices heard with our "Reject The Impeachment Witch Hunt!" FaxFire.

Take action now to tell all 50 GOP Senators to vote "NO!" on convicting Donald Trump. In just minutes, your personalized message can reach EVERY Republican in the United States Senate. Click here or on the banner below to immediately fax 50 GOP Senators for just $30:

Your faxes will reach 50 Senators today for just $30. To encourage team members to take action, we've discounted our LEVEL ONE FaxFire by 40%! If you can "go the extra mile," your LEVEL TWO faxes will reach every U.S. Senator for only $50. To encourage MAXIMUM PARTICIPATION, we're offering you a 50% discount on our LEVEL TWO FaxFire. That means you can send 100 faxes for 50 cents each!

P.S. If you missed last night's update, please click here. I contains a "greatest hits" list of the most inflammatory Democrat rhetoric that President Trump's legal team shared with the Senate yesterday. Click here or on the banner below to instantly send your "Reject The Impeachment Witch Hunt" faxes to 50 GOP Senators for just $30:

Read the blog at Grassfire