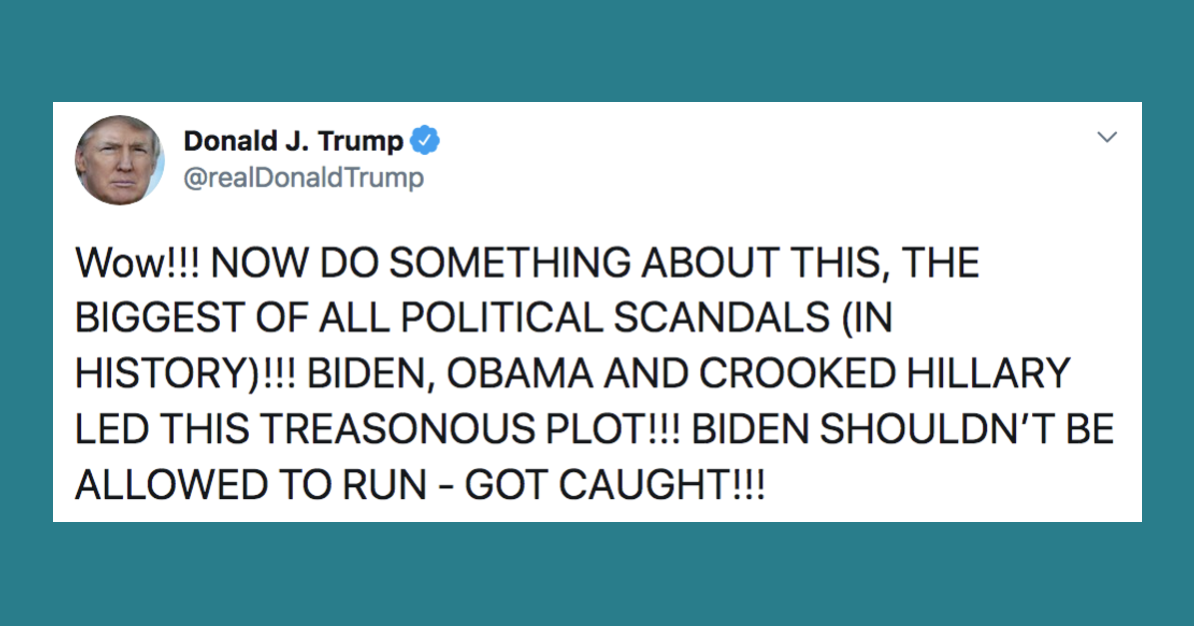 Attorney General William Barr, reportedly, has told GOP lawmakers NOT to expect additional indictments related to the Russia-hoax Witch Hunt before Election Day. U.S. Attorney John Durham is investigating the Crossfire Hurricane investigation that accused the Trump campaign of colluding with Russia to win the presidency in 2016.

But evidence now indicates that it was the Hillary Clinton campaign and rogue FBI agents that were working with Russian agents as part of a smear operation to hurt Candidate, President-elect and President Trump. During his radio show yesterday, Rush Limbaugh told the Commander-in-Chief about an Axios article that claims Barr told "top Republicans that the Justice Department’s sweeping review into the origins of the Russia investigation will not be released before the election."

Trump said it was the first he'd heard that Durham's probe wouldn't be completed by November 3: "I will be very disappointed if that Axios piece that you read to me is true because they've had plenty of time to get this done." He added, "The Republicans, they don't play the tough game. If this were the other side you would have had 25 people in jail for the rest of their lives with what they found."

Republicans need to END the "Play Fight and Surrender" strategy they've perfected since Barack Obama took office in 2008! The Russia-hoax Witch Hunt was a Deep State, D.C. Swamp coup attempt against the duly elected President of the United States. Mr. Trump is right! People deserve to be vigorously investigated and prosecuted for ObamaGate.

The Senate Judiciary and Homeland Security Committees have subpoena power and can call Obama-era officials to testify. GOP Senators MUST hear from grassroots Americans, like you, who want justice for President Trump. Demand they hold accountable any and all ROGUE members of the Obama administration.

For just $15, you can instantly send a personalized "INVESTIGATE OBAMAGATE" fax to your Representative, your two Senators and EVERY Republican member of the Senate's Homeland Security AND Judiciary Committees. Click here or on the banner below now to demand GOP Senators hold former members of the Obama administration responsible for any Deep State, D.C. Swamp attacks against President Trump:

Whether you've sent "INVESTIGATE OBAMAGATE" faxes before or it's your first time, please consider taking action this weekend to make your voice heard. For a complete list of FaxFire targets and their contact information, click here. Thanks, in advance, for standing with President Trump.

P.S. If you didn't see our previous message about another ObamaGate bombshell, you'll find it below. If you have read it, please forward this email to a friend or family member. GOP Senators need to hear from grassroots patriots like you demanding they EXPOSE ObamaGate NOW!

According to a report by The Federalist about the "smear operation," those notes "show that the U.S. intelligence community knew in 2016 that Russian intelligence was actively monitoring, and potentially injecting disinformation into, [Hillary] Clinton’s anti-Trump collusion narrative."

In two Twitter posts, Rep. Jim Jordan (R-OH) "connected the dots" and explained what the Brennan notes and other recently declassified information reveal. This morning, he tweeted:

Here’s what we know: 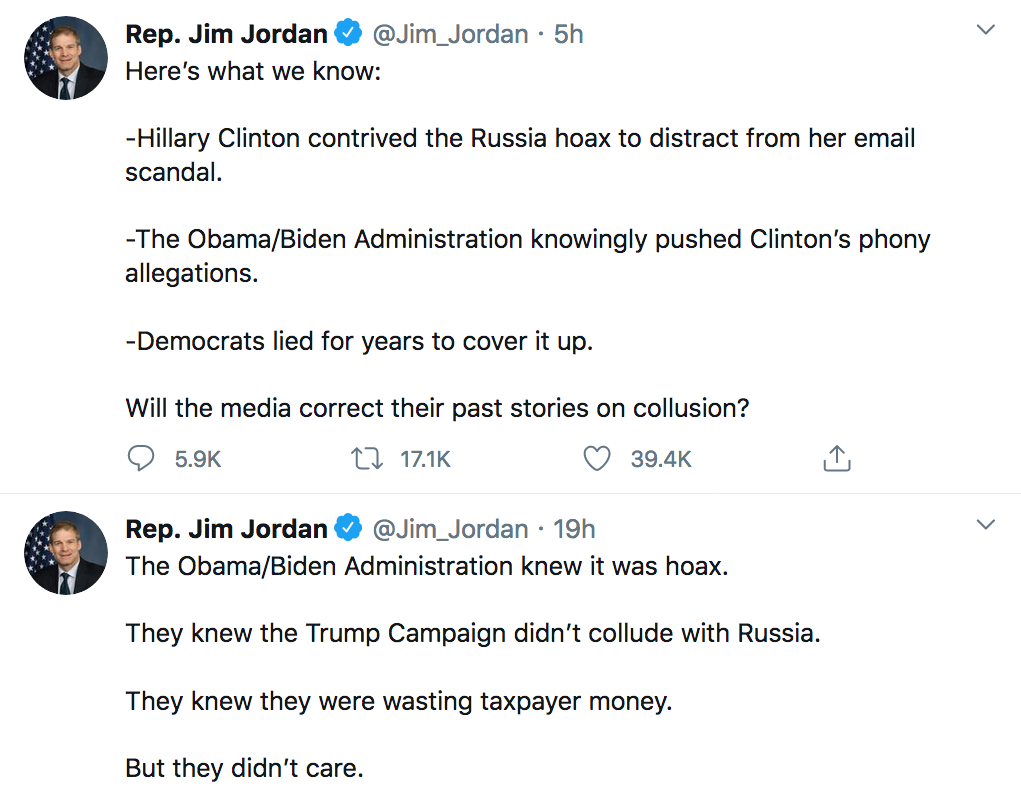 -Hillary Clinton contrived the Russia hoax to distract from her email scandal.

-Democrats lied for years to cover it up.

Will the media correct their past stories on collusion?

The Obama/Biden Administration knew it was [a] hoax.

They knew the Trump Campaign didn’t collude with Russia.

They knew they were wasting taxpayer money.

But they didn't care.

President Trump also responded to the ongoing scandal's latest developments via Twitter. As usual, he didn't hold back. Here are some of his ObamaGate tweets from the past 24 hours:

We're confident many of our team members are asking the same questions as America's Commander-in-Chief: Where are all the arrests? When is Congress going to do something? Utilize Grassfire's "INVESTIGATE OBAMAGATE" FaxFire to tell members of Congress that you stand with President Trump!

GOP members of the Senate Judiciary and Homeland Security Committees need to hear from grassroots Americans who want justice for President Trump. Any and all ROGUE members of the Obama administration MUST be held accountable! We the People don't need more of the "Play Fight and Surrender" strategy that Republicans have perfected since Obama took office in 2008!

Do you want to see BOTH of the above-mentioned Senate committees intensify their investigation into possible corruption by the Obama administration? If so, reach directly into dozens of Capitol Hill offices with Grassfire's "INVESTIGATE OBAMAGATE" FaxFire for just $15!

Click here or on the banner below to instantly send your personalized message to your Senators, your Representative and EVERY Republican member of the Senate's Homeland Security AND Judiciary Committees. Demand they hold key members of Obama's inner circle responsible and accountable for any Deep State, D.C. Swamp attacks against President Trump:

(Not a VIP? Go here to become one and send this fax at 80% discount.)
(Having trouble accessing your benefits? Go here.

ObamaGate is turning into THE greatest political scandal in U.S. history -- all designed to undermine Candidate, President-elect AND President Trump! GOP Senators need to work harder AND faster to EXPOSE Obama-era corruption.

For just $15, you can instantly reach your Representative, your two Senators and every GOP member of the Senate's Homeland Security AND Judiciary Committees. Even if you've sent "INVESTIGATE OBAMAGATE" faxes before, please consider reaching out again today. Thanks, in advance, for taking action!

P.S. The clock is ticking on ObamaGate! If Joe Biden wins the presidency or Republicans lose control of the Senate in next month's elections, the American people might never know the truth about possible Obama-administration corruption. Rise up and call on the Republican-led Senate to take action NOW by ramping up their investigations! The time for empty promises is over. Click here or on the banner below to demand the GOP stand with President Trump and EXPOSE ObamaGate:

Trump to GOP on ObamaGate: "DO SOMETHING!!!"
Trump: "Republicans don't play the tough game"
Read the blog at Grassfire