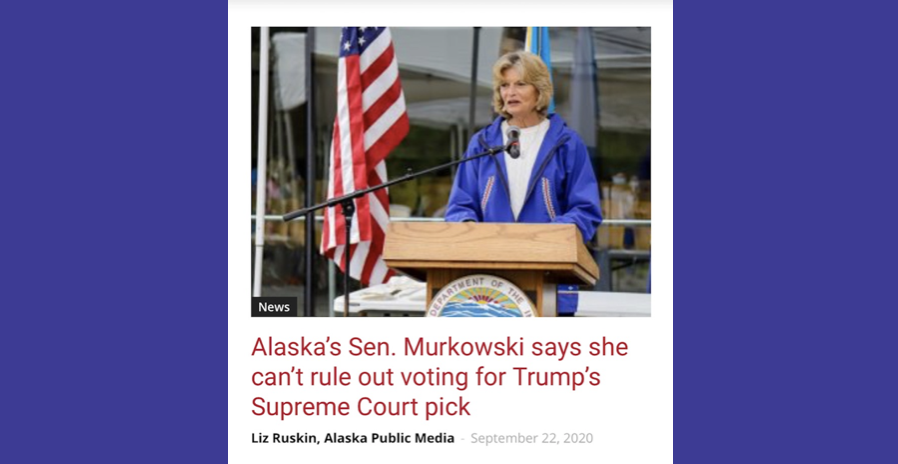 Senate Republicans are approaching unanimous consent on supporting a vote for President Trump's eventual Supreme Court nominee. One of the GOP "holdouts" we told you about yesterday appears to be changing her tune. According to Alaska Public Media:

If Democrats were counting on Lisa Murkowski to vote against President Trump's next nominee to the Supreme Court, they should think again.

Sen. Murkowski said Tuesday she could not rule out that she would vote to confirm a Trump nominee if the Judiciary Committee approves one before the November election.

The President is scheduled to announce his pick to replace Justice Ruth Bader Ginsburg on Saturday. The Senate will need at least 50 Republican votes to confirm and seat a new justice by Election Day. (Vice President Mike Pence would cast the deciding vote in the event of a tie.)

But moving forward on Mr. Trump's choice for his third Supreme Court justice before November 3 is still an uphill battle. While Murkowski now doesn't rule out voting in favor of the President's pick, she offers no guarantee that she'll support his choice either.

Take immediate action to support President Trump's efforts to replace Justice Ginsburg. Use Grassfire's "Fill That Seat!" FaxFire to demand that Murkowski and the 99 other Senators confirm and seat a new Supreme Court justice by Election Day. Click here or on the banner below to immediately send up to 16 faxes to key Senate targets on Capitol Hill for ONLY $15:

Urge Senators (especially GOP lawmakers) to approve our Commander-in-Chief's future nominee as quickly as possible. Immediately reach into Senate offices on Capitol Hill with your personal message, demanding they "Fill That Seat" BEFORE Election Day. Thanks, in advance, for taking action today.

P.S. If you missed yesterday's Supreme Court update, click here. Please keep reading to find out what other Senate RINOs are doing to help or hurt the President's efforts to seat a nine-member Supreme Court as quickly as possible.