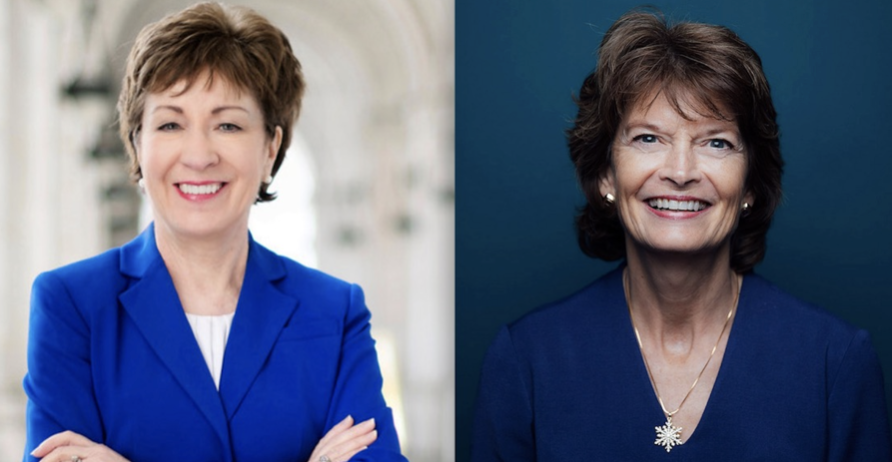 Two, lone GOP Senators say they will NOT support President Trump's nominee to replace Ruth Bader Ginsburg on the Supreme Court of the United States (SCOTUS). The late justice, who served on the nation's High Court since 1993, died of complications from pancreatic cancer on Friday. Mr. Trump is expected to announce his pick on Saturday.

The President has promised to replace Justice Ginsburg with another woman. Yet, ironically, the only two Senate Republicans who oppose nominating and confirming a new justice before Election Day are women! Sens. Susan Collins of Maine and Lisa Murkowski of Alaska say they're against seating a full nine-member Supreme Court so close to the presidential election.

Every other GOP member of the United States Senate has agreed to offer "advice and consent" on a nominee -- but NOT Collins and Murkowski. Why? Because Senate Majority Leader Mitch McConnell (R-KY) refused to move forward on former President Barack Obama's nominee, Judge Merrick Garland, less than eight months before the 2016 elections.

On Sunday, Murkowski released a statement saying, "For weeks, I have stated that I would not support taking up a potential Supreme Court vacancy this close to the election. ... We are now even closer to the 2020 election — less than two months out — and I believe the same standard must apply."

Collins, who's facing a tough reelection challenge in her state, said yesterday, "I would oppose the nominee, not because I might not support that nominee under normal circumstances, but we're simply too close to the election. And in the interest of being fair to the American people and consistent ... with the Garland nomination, ... I now think we need to play by the same set of rules."

If Collins and Murkowski want to apply Democrat "standards" and "rules" to Republicans, perhaps they should consider that with the most recent Supreme Court nominee, Justice Brett Kavanaugh, there were no standards or rules on the Left. Democrats -- with full help from the FAKE NEWS media -- vilified and smeared Kavanaugh mercilessly and without evidence, trying to derail his nomination.

(Also, the same Democrat "standards" and "rules" that Collins and Murkowski are so concerned about also include killing preborn babies, confiscating guns from law-abiding Americans and refusing to condemn the rioting, looting and violence of the past several months.)

Again, EVERY OTHER REPUBLICAN SENATOR says they'll support President Trump's nominee. Even the "king" of the RINOs, Sen. Mitt Romney of Utah, said yesterday that he's in favor of voting on a Supreme Court pick by Election Day.

Grassfire has two ways to empower our team members to take action in support of President Trump today. First, call the Washington, D.C. offices of Sens. Collins and Murkowski. Tell them what you think about their refusal to consider replacing Justice Ginsburg before November 3:

Second, you also can take immediate action by utilizing Grassfire's "Fill That Seat!" FaxFire to demand the two Senators stop standing with Democrats. We launched this new, fax initiative to empower our team members to make their voices heard.

Urge Senators (especially GOP lawmakers) to confirm our Commander-in-Chief's future nominee as quickly as possible. Immediately reach into Senate offices on Capitol Hill with your personal message, demanding they "Fill That Seat" BEFORE Election Day. Click here or on the banner below to immediately send up to 16 faxes for ONLY $15:

ATTENTION MONTHLY MEMBERS: GO HERE TO SEND THIS FAX AT AN 85% DISCOUNT!

Since former Senator Harry Reid invoked the so-called "nuclear option" in 2013, it now only takes a simple majority of Senators to confirm a federal judge -- that includes Supreme Court justices. Senate Republicans can afford to lose just three votes to successfully confirm a Trump nominee before November 3.

But, so far, Collins and Murkowski are the only "No" votes. Take action by faxing them and other key Senators now. Click here to immediately send your personalized messages to Capitol Hill.

Go the extra mile by utilizing our "Level Two" option. It empowers you to reach every Republican Senator at a 37% DISCOUNT. Choose "Level Three" and urge EVERY member of the U.S. Senate to "Fill That Seat!" at 50% OFF our regular price!

P.S. There's simply too much at stake to wait on confirming a ninth Supreme Court Justice. So, RINO Sens. Collins and Murkowski MUST hear from you to ensure America doesn't have a "split" court for the upcoming presidential election! Take action to support President Trump's nominee so he or she can be seated on the nation's High Court BEFORE November 3. Click here or on the banner below to immediately send your "Fill That Seat!" faxes now: