Trump rally in FL: "This is unbelievable!" (video) 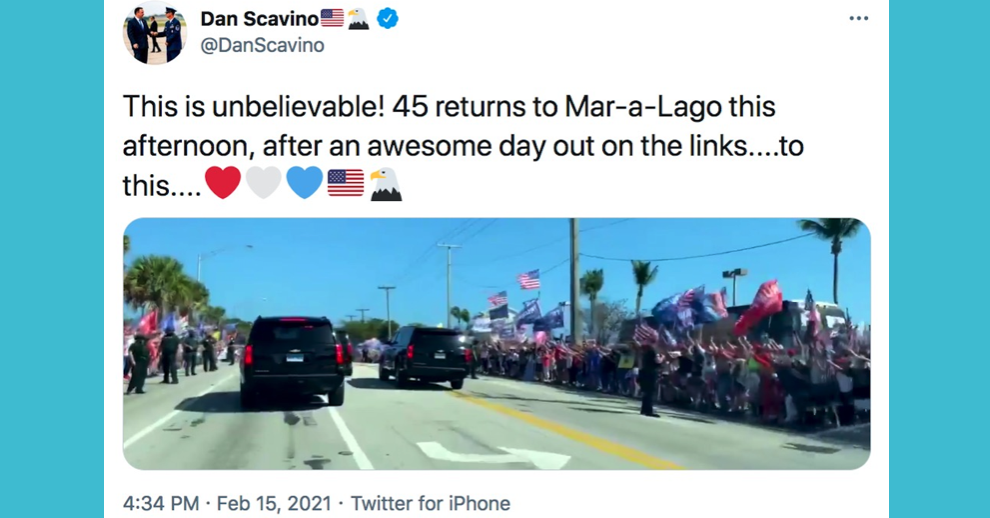 In honor of Presidents' Day, thousands of Trump supporters lined the streets of West Palm Beach, Florida. It was an amazing sight. Former White House Deputy Chief of Staff Dan Scavino shared a short video of President Trump's motorcade passing through the rally yesterday. In just 24 hours, that celebration of "45" has been viewed more than two million times on Twitter. With the video, Scavino also tweeted: 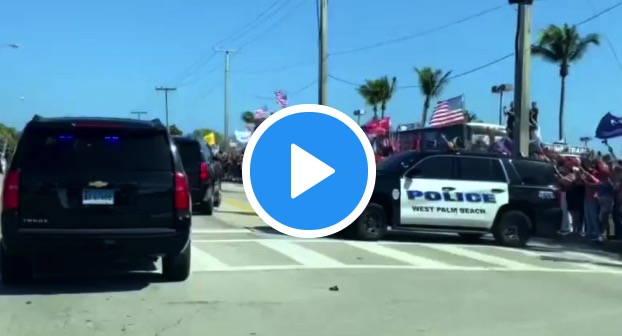 "This is unbelievable! 45 returns to Mar-a-Lago this afternoon, after an awesome day out on the links....to this...."

(Click here or on the image to watch the video.)

Radical Democrats, the Unhinged Left, the D.C. Swamp, the Deep State, Big Tech, FAKE NEWS, Hollywood's "elite" and NeverTrump Republicans hate to see this kind of love, support and appreciation for Donald Trump. They'd rather destroy our 45th president and the "America First" movement he started more than five years ago.

The fight to "Make America Great Again" isn't over, but Grassfire fully expects that this "War on Trump" is far from over. We expect even more attacks on President Trump and the 74 million Americans who voted for him. The enemies of freedom and liberty want to totally discredit, silence, censor, and cancel everyone who doesn't conform to their anti-faith, anti-America, anti-Trump mindset.

If you want to push back against efforts to bully, intimidate, silence, censor and cancel Trump supporters, Grassfire has EXACTLY what you need. Our  "I'M A MAGA VOTER" ReStickers empower you to tell your family, friends and neighbors: "I WILL NOT BE SILENCED!"

In appreciation for your contribution of ANY AMOUNT to help Grassfire fight back in the "War on Trump," we’ll send you two of these state-of-the-art bumper stickers. "I'M A MAGA VOTER" ReStickers can be applied and reapplied to virtually any smooth surface.

Click here or on the banner below to place them on your car, truck, van or SUV and tell your entire community: I WILL NOT BE SILENCED!

Again, you'll receive two "MAGA Voter" ReStickers in appreciation for your contribution of any amount to help Grassfire build. Shipping is absolutely FREE. But we only have a limited quantity available, so don't wait! Order now.

Thankfully, our former commander-in-chief has pledged, repeatedly, to not stop fighting for the American people. In a statement released immediately after his second impeachment acquittal on Saturday, President Trump promised his supporters:

Our historic, patriotic and beautiful movement to make America great again has only just begun. In the months ahead, I have much to share with you, and I look forward to continuing our incredible journey together to achieve American greatness for all of our people.

We have so much work ahead of us, and soon we will emerge with a vision for a bright, radiant, and limitless American future.

Together there is nothing we cannot accomplish.

We remain one people one family and one glorious nation under God, and it’s our responsibility to preserve this magnificent inheritance for our children and for generations of Americans to come.

Again, in appreciation for your contribution of ANY AMOUNT today, we'll rush you two "I'M A MAGA VOTER" ReStickers. We'll even cover the shipping. Refuse to be silenced! Click here to order yours now and help Grassfire fight back in the days, months and years ahead. Thanks, in advance, for your support.

P.S. If you still stand with America's 45th president and want to see his "America First" movement grow even stronger in the days, months and years ahead, tell your family, friends and neighbors EXACTLY where you stand. Proudly display your support for Donald J. Trump! Click here or on the banner below now to receive two "I'M A MAGA VOTER" ReStickers in appreciation for your contribution of ANY AMOUNT: