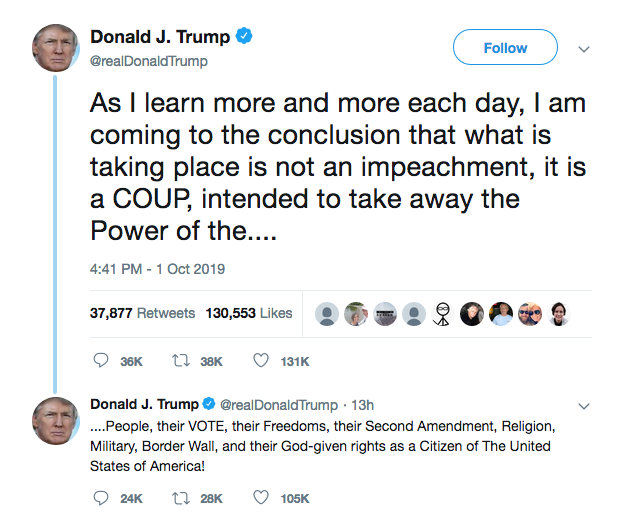 As I learn more and more each day, I am coming to the conclusion that what is taking place is not an impeachment, it is a COUP, intended to take away the Power of the ... People, their VOTE, their Freedoms, their Second Amendment, Religion, Military, Border Wall, and their God-given rights as a Citizen of The United States of America!

Grassfire agrees! This impeachment inquiry by Pelosi and her fellow Democrats is a farce. It's nothing more than another Witch Hunt against our Commander-in-Chief. The Democrats will use anything in their power to hurt President Trump politically and to undo the results of a free and fair election.

THIS IS, PLAIN AND SIMPLE, AN EXISTENTIAL CRISIS! DEMOCRATS HAVE LAUNCHED AND ARE PURSUING THE GREATEST THREAT TO THE TRUMP PRESIDENCY THAT WE HAVE SEEN.

But there is some good news. At the moment, not every Democrat appears to be on board with Pelosi's plan. Grassfire has learned that at least 10 "vulnerable" House members are resistant to impeachment, mostly due to the fact that they serve districts that Mr. Trump won in 2016. According the Washington Examiner:

They're part of a rapidly-shrinking group following their House peers in holding out. ... Some vulnerable House Democrats are portraying the issue as a matter of semantics. They want to back committee investigations into Trump while shunning the word "impeachment."

Nice try, Dems. This isn't about "semantics." It's about their efforts to take down President Trump by force, rather than by winning an election! Republicans MUST NOT underestimate the ramifications of the House impeaching Donald Trump and where it could end up. This inquiry opens the door to the President being REMOVED FROM OFFICE BEFORE THE 2020 ELECTION!

In response to the news about vulnerable, "holdout" Democrats in the House, Grassfire has updated the targets in our I SAY "NO" TO IMPEACHMENT FaxFire -- WITHOUT increasing the price. Receive a 40% discount when you fax your personalized messages to those ten House Democrats; your Representative; your two Senators; and key House and Senate Leaders. You'll receive an even BIGGER DISCOUNT (50% AND 55%) when you utilize Level 2 and Level 3 of the I SAY "NO" TO IMPEACHMENT FaxFire.

Click here or on the banner below to immediately send your faxes for as low as $.45 each!

If you're outraged by this latest unfounded Witch Hunt against America's Commander-in-Chief, Grassfire invites you to utilize our unique FaxFire system. Rush your I SAY "NO" ON IMPEACHMENT faxes directly to 10 vulnerable, Democrat holdouts in the House; your Representative; your two Senators; and key House and Senate leaders -- FOR A 40% TO 55% DISCOUNT.

Grassfire feels so strongly about the need for our team members to take action, that we've lowered the price on all three levels of the I SAY "NO" ON IMPEACHMENT FaxFire. Act now to demand Democrats stop fanning the flames of another Witch Hunt! Fax your personalized message to Capitol Hill offices for as low as $.45 each!

If you think this is outrageous, take action now! FAX House and Senate leaders (including Pelosi), your Representative and your two Senators to SAY "NO" ON IMPEACHMENT:

Thanks, in advance, for taking action today!