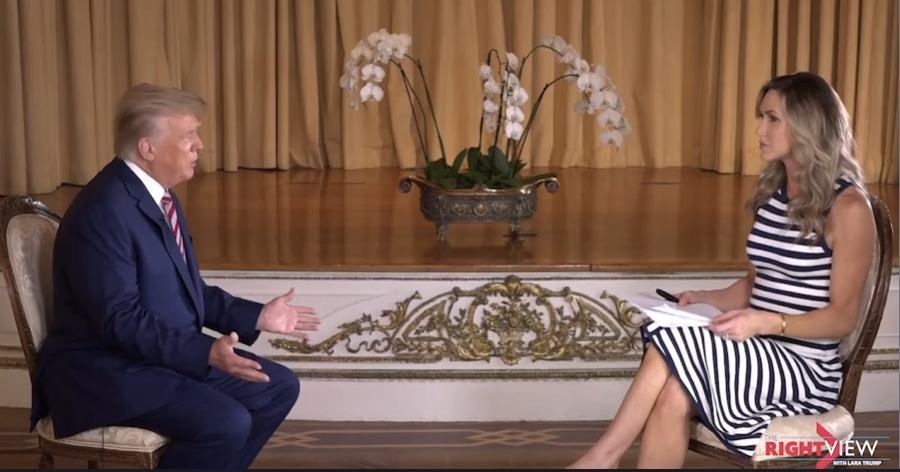 In an interview that was quickly BANNED by the Facebook regime, President Trump told his daughter-in-law there's a possibility he WILL run again in 2024. America's 45th president appeared on "The Right View with Lara Trump" to discuss Joe Biden, FAKE NEWS, social-media censorship, China and the possibility of another "Make America Great Again" rally soon. Mr. Trump also had a lot to say about the "corrupt, fraudulent" 2020 election: 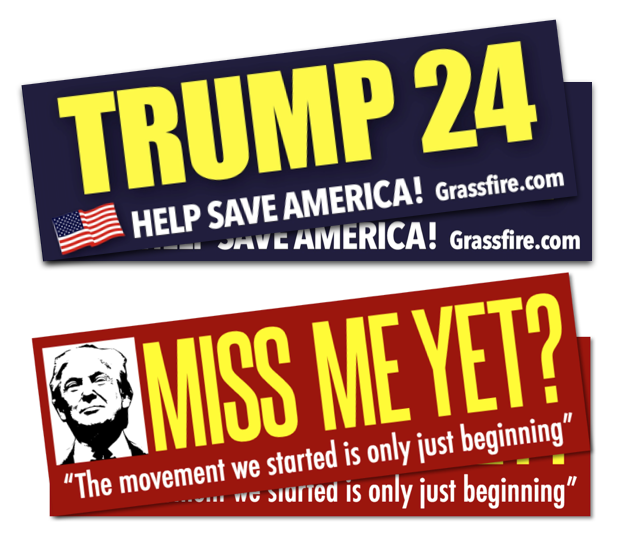 "It was disgraceful what happened. It was a third-world-country voting system. It's a shame. It's an absolute shame. ... But we had a fantastic election. I ran twice, and we did better the second time by a lot -- by 12 million votes."

Those comments were enough to have the video banned by Facebook. But social media and Big Tech silencing President Trump is nothing new. The interview is still available on some platforms. Grassfire has "The Right View" video posted here -- at least for now!

But the biggest news from this week's sit-down was about the next presidential election. Lara Trump asked if Americans can "have hope that there's a possibility to see Donald Trump run again in 2024?"

"You do have hope," he replied. "We love our country. We all owe a lot to our country, but now we have to help our country."

If you're a Grassfire team member who supports "Trump for President!" in 2024, our exclusively designed ReSticker PAK is the perfect way to show it. Tell your family, friends and neighbors exactly where you stand on "Making America Great Again" with our "TRUMP 24" ReSticker PAK.

Click here or on the banner below now to receive a "TRUMP 24" and "MISS ME YET?" ReSticker in appreciation for your contribution of ANY AMOUNT. Contribute $30 or more to help Grassfire build and receive TWO "TRUMP 24" PAKs. That's a total of four ReStickers shipped ABSOLUTELY FREE:

These state-of-the-art bumper stickers can be applied and re-applied to virtually any smooth surface. Display them on your car, truck, van or SUV to share a pro-Trump message with your entire community. Show your support for America's 45th president becoming our nation's 47th president!

With the Biden administration green-lighting a radical, far-Left agenda, Grassfire needs your support to continue promoting and defending America's founding principles of life, liberty and limited government. As radical Democrats and the Unhinged Left seek to silence conservatives and erase President Trump's legacy, your support helps Grassfire empower YOU to fight back.

Again, when you contribute ANY AMOUNT to help us build, we'll send you one "TRUMP 24" PAK. Contribute $30 or more and receive TWO pairs of our exclusive "TRUMP 24" and "MISS ME YET?" ReStickers. We'll cover the shipping! Click here to order now.

Grassfire doesn't have deep-pocketed donors, benefactors or "angel investors" underwriting our grassroots efforts. That's why the generosity of our team members is so crucial to fulfilling our God-ordained mission to REPORT TRUTH, so you can TAKE ACTION. Thanks, in advance, for your support.

P.S. Are you willing to help Grassfire remain a voice of truth in this ongoing fight for the heart and soul of our nation? If so, please click here or on the banner below now to receive a "TRUMP 24" ReSticker PAK in appreciation for your contribution of ANY AMOUNT: