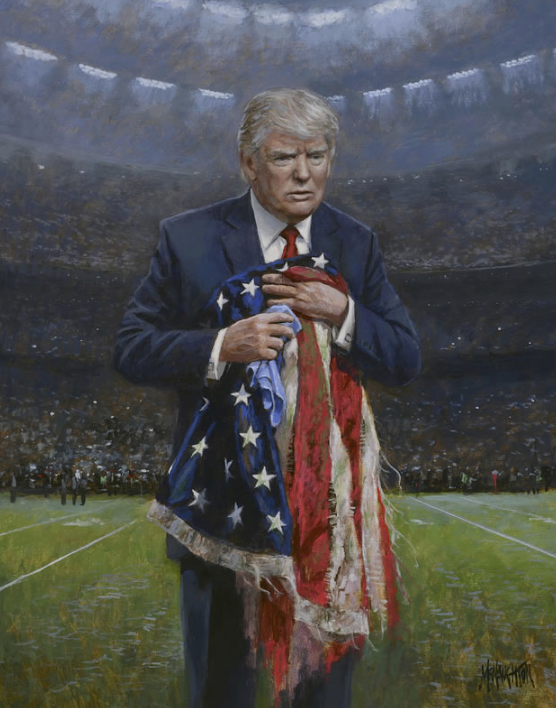 New Orleans Saints quarterback Drew Brees has enjoyed a long, successful career in the NFL. He's won a Super Bowl and has thrown more touchdown passes than any other signal-caller in league history. But last week, the future Hall of Famer made news for his bold support of the American flag.

In an interview with Yahoo! Finance, Brees was asked about the possibility of national-anthem protests during the upcoming NFL season. He replied, "I will never agree with anybody disrespecting the flag of the United States of America or our country."

That's all it took for the "rage mob" to swarm. Leftists attacked and vilified him. Even teammates and fellow professional athletes didn't hold back. He faced a tidal wave of criticism for comments that, not too long ago, were considered patriotic and "mainstream." But in the "cancel culture" of 2020, Brees instantly became "Public Enemy #1" to many liberals and progressives.

In light of the civil unrest in cities across America last week, the Saints QB later tried to clarify his comments. He released a statement to ESPN, saying:

"I love and respect my teammates and I stand right there with them in regards to fighting for racial equality and justice. I also stand with my grandfathers who risked their lives for this country and countless other military men and women who do it on a daily basis."

That still wasn't enough to satisfy the "tolerant" Left. A day after his initial flag comments, Brees apologized on Instagram: 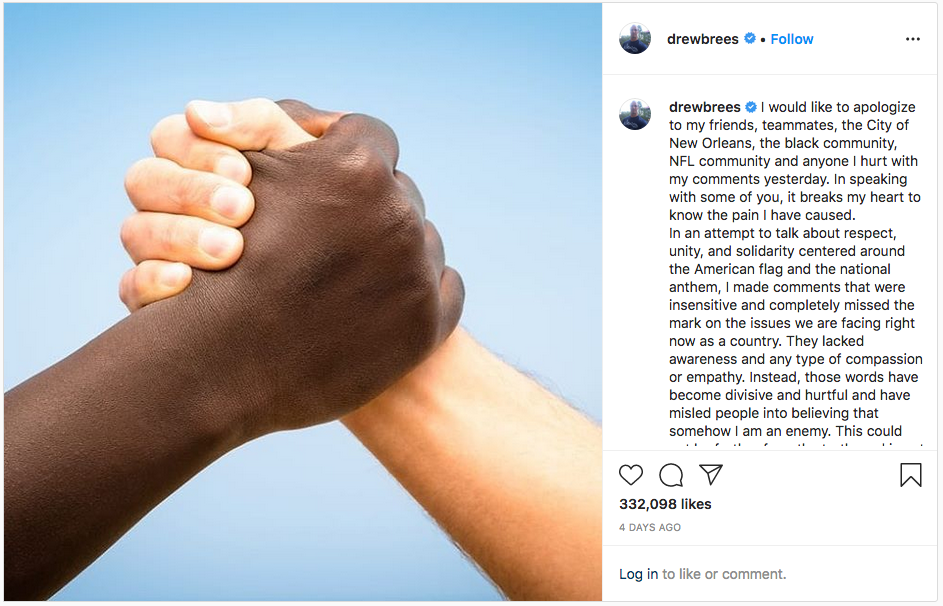 "In an attempt to talk about respect, unity, and solidarity centered around the American flag and the national anthem, I made comments that were insensitive and completely missed the mark on the issues we are facing right now as a country."

That apology didn't sit well with President Trump, who tweeted: "I am a big fan of Drew Brees. I think he’s truly one of the greatest quarterbacks, but he should not have taken back his original stance on honoring our magnificent American Flag." 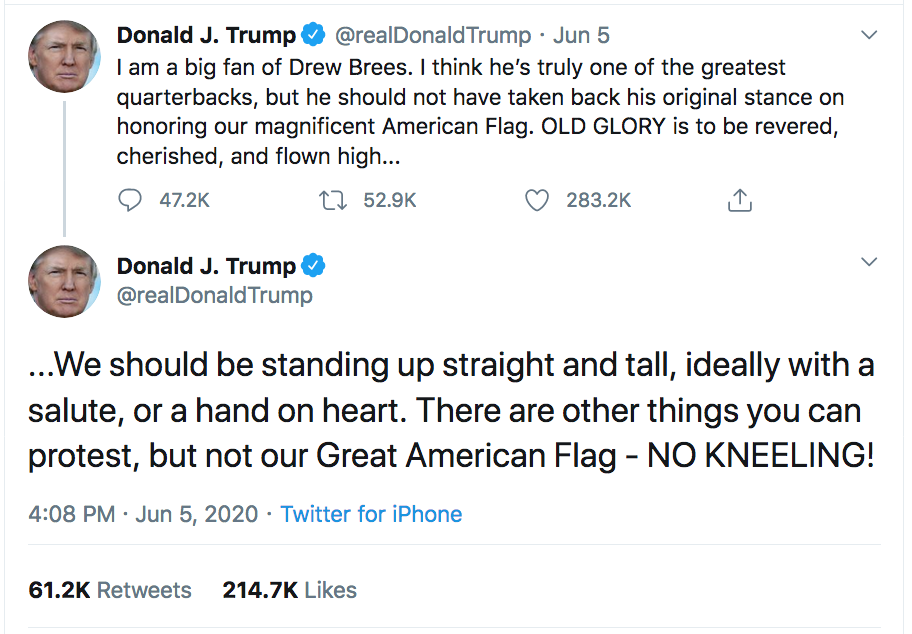 America's Commander-in-Chief harshly criticized the national-anthem protests by NFL players in 2017 and 2018. In his tweet about Brees, the President added:

"OLD GLORY is to be revered, cherished, and flown high ... We should be standing up straight and tall ... There are other things you can protest, but not our Great American Flag - NO KNEELING!

Shortly after the national-anthem protests by NFL players in 2017, "America's Artist" Jon McNaughton painted "Respect the Flag." His patriotic response to the controversy features President Trump on a football field trying to clean a shredded and trampled American flag.

"When the NFL players decide to kneel as the national anthem was given, I felt sick," McNaughton says. "That flag represents the vast number of Americans who have sacrificed their lives for our nation. It is about their blood and the sacrifice of many thousands."

The popular and patriotic artist agreed with our Commander-in-Chief's reaction to the national-anthem protests. "The way Trump called out the NFL," McNaughton insists, "was an example of how a president should lead, with courage to say and do the right thing regardless of the reaction of others."

Click here or on the banner below to receive "Respect the Flag" in appreciation for your contribution of $35 or more to help Grassfire build:

We know that Grassfire Nation loves, appreciates and respects the Stars & Stripes and our national anthem. Most of our team members also support President Trump, too. That's why we're giving you the opportunity to purchase an 11" x 14" lithograph of "Respect the Flag" for a contribution of $35 or more to help us build in this crucial election year.

Grassfire made our original order for these prints back in early 2018, and we thought they were sold out two years ago. But during a recent inventory check, our project manager found 100 of these powerful prints that Grassfire didn't know we had. Now, we're making them available to the first 100 team members who want them.

Again, when you contribute $35 or more to help Grassfire build, we'll send you one 11" x 14" lithograph of Jon McNaughton's "Respect the Flag." Plus, we'll cover the shipping. Click here to order. Thanks, in advance, for your support.

P.S. Jon McNaughton warns: "If we do not respect the flag enough to fight for what it stands for — liberty, justice, and strength — then we will be the weakest generation." We only have 100 of these powerful and patriotic prints available. Click here or on the banner below now to receive "Respect the Flag" in appreciation for your contribution of $35 or more to help Grassfire build. Shipping is FREE.