These two Democrat Senators can save America from socialism 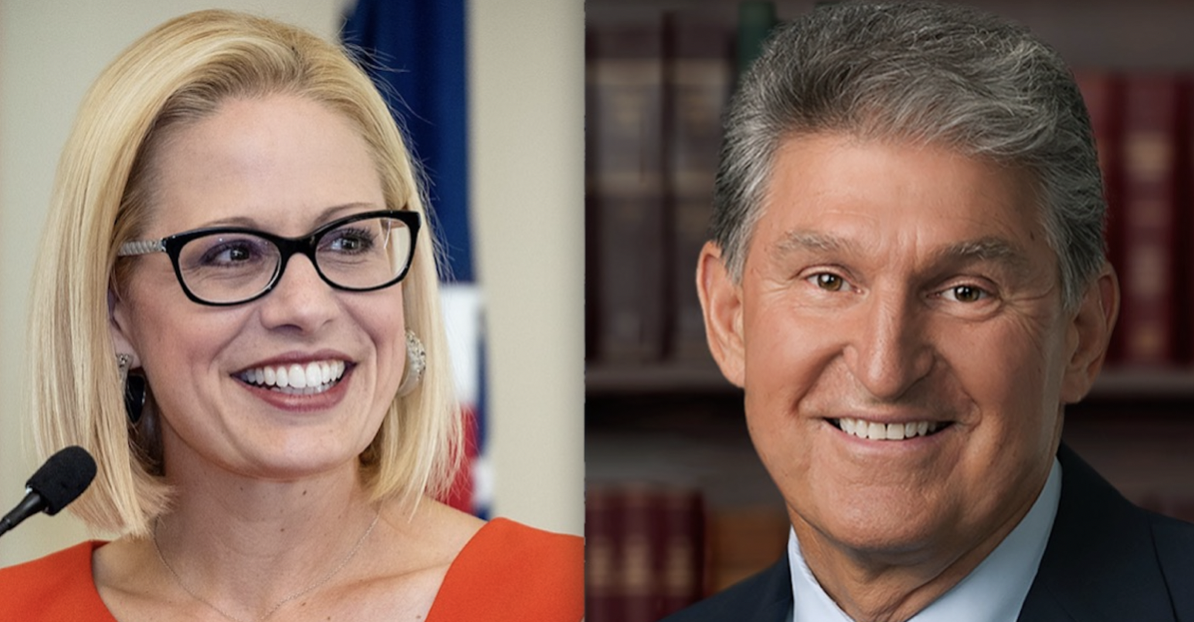 With lawmakers returning to Capitol Hill next week, the Senate will pick up the SPENDING SCAM baton from the House. A $1.2-trillion, fake, "infrastructure" bill is waiting to be signed into law, but Pelosi has threatened to derail it unless legislation approving $3.5-trillion in Democrat, wish-list spending is passed at the same time.

Through a process called "budget reconciliation," that legislative monstrosity can be passed with ZERO REPUBLICAN SUPPORT. Because Kamala Harris holds the tie-breaking vote in the 50-50 Senate, America could descend into full-blown socialism without a single GOP vote!

In an opinion article published by The Wall Street Journal today, Manchin wrote "Why I Won't Support Spending Another $3.5 Trillion." He says Congress needs to take that "strategic pause" before burdening America with additional spending and debt:

At $28.7 trillion and growing, the nation's debt has reached record levels. Over the past 18 months, we've spent more than $5 trillion responding to the coronavirus pandemic. Now Democratic congressional leaders propose to pass the largest single spending bill in history with no regard to rising inflation, crippling debt or the inevitability of future crises.

We need Grassfire team members to STEP UP BIG over the next two weeks and deliver THOUSANDS of "Stop The Spending Scam!" petitions to these two Senators and EVERY Republican in the Upper Chamber. Take immediate action to make your voice heard in the halls of Congress!

Click here or on the banner below now to sign the "Stop The Spending Scam!" national petition. Once we reach 20,000 signatures, Grassfire representatives will deliver your petition to Sen. Sinema, Sen. Manchin and GOP leadership on Capitol Hill. Go here:

Spearheaded by far-Left Sen. Bernie Sanders (I-VT), the $3.5-trillion bill for "human infrastructure," "election instrastructure," "climate infrastructure," etc. is a HUGE Democrat wish-list of progressive, pork spending. EVERY GOP Senator is against THAT legislation, but there's almost NOTHING they can do to stop it.

Radical Democrats are on record promoting paid leave, childcare, "caregiving," police accountability, election "reform," affordable housing, fighting "climate change" and even packing the Supreme Court as "infrastructure." To progressives, "infrastructure" is whatever they say it is. The Unhinged Left is trying to use trillions of taxpayer dollars to build a super highway to socialism.

Click here to make your voice heard and demand they "Stop The Spending Scam!" We'll deliver your petition to Sinema, Manchin and GOP leadership when we reach 20,000 signatures. Thanks, in advance, for making your voice heard.

P.S. Unlike the first SPENDING SCAM, which needed 60 votes to pass, the $3.5-trillion bill can be passed through "budget reconciliation" and would require only a simple majority vote to become law. Don't let America get pushed off the cliff into full-blown socialism with ZERO REPUBLICAN VOTES! Click here or on the banner below now to sign the "Stop The Spending Scam!" national petition:

Sinema: I simply won't back a $3.5T spending bill (POLITICO)