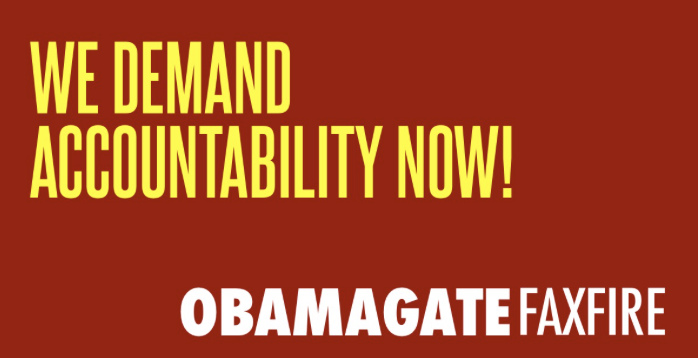 An "ObamaGate" scandal is erupting on Capitol Hill. And according to President Trump, it "makes Watergate look small time!"

In a bombshell article today, The Federalist reports:

"Even after Barack Obama had left office and [then-FBI director] James Comey had a new commander-in-chief to report to, Comey obeyed Obama by withholding intel from President Trump."

But why would the former president reportedly ask the FBI head to withhold information from the new administration? President Trump tweeted his answer to that question shortly before noon today:

"Because it was OBAMAGATE, and he and Sleepy Joe [Biden] led the charge. The most corrupt administration in U.S. history!"

Even more "dirt" has come to light recently. According to sworn testimony by John Podesta, Hillary Clinton's 2016 campaign manager, the DNC and the Clinton campaign colluded with a Russian asset to create a fake dossier in hopes of harming Mr. Trump's presidential aspirations.

Also, former members of the FBI and DOJ stand accused of acting improperly in their investigation of President Trump's former national security advisor Gen. Michael Flynn. The charges were so incriminating that current Attorney General William Barr dropped the government's case against Flynn.

Back in 2019, Sen. Lindsey Graham (R-SC) called rogue actions by federal agents: "Systematic corruption at the highest level of the Department of Justice and the FBI against President Trump and in favor of Hillary Clinton."

Nefarious activities against our Commander-in-Chief continue coming to light. Yet, Graham, the chairman of the powerful Senate Judiciary Committee, has done nothing to bring rogue agents and to justice. He's pledged for more than a year to get to the bottom of this entire Obama-Clinton conspiracy against President Trump. But they've been nothing more than empty promises. Isn't it time for that to change?

As the chairman of the Senate Judiciary Committee, Sen. Graham has the power to call and subpoena witnesses to investigate the ObamaGate scandal. If you think the American people deserve a full investigation into the real Obama-Clinton, anti-Trump conspiracy, click here or on the banner below to schedule your ObamaGate Faxes for immediate delivery on Capitol Hill:

It's time for American patriots to DEMAND that the Republican-led Senate take action to expose this scandal. IT'S TIME TO INVESTIGATE OBAMAGATE! For just $15, you can reach your two Senators, your Representative, Sen. Graham, Senate Majority Leader Mitch McConnell (R-KY), and every GOP member of the Senate Judiciary Committee.

Months ago, Sen. Graham called FBI efforts to undermine President Trump "the tip of the iceberg." Now, grassroots Americans must push him to get to the bottom of the real collusion scandal.

P.S. The "smoking guns" connecting the Obama Justice Department, Comey's FBI, and the Clinton campaign keep showing up! ObamaGate could be one of the greatest political scandals in U.S. history -- all designed to destroy a president-elect! Call on the GOP-led Senate to investigate the Obama administration and to recommend that anyone involved be prosecuted and punished. Go here to fax now: