Tell Dems: "It's time to stop the violence!" 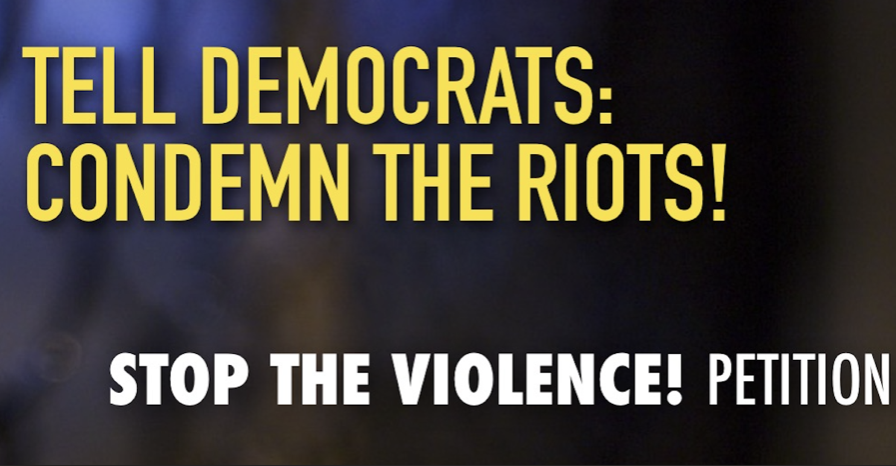 Most reasonable, right-thinking Americans would agree that the rioting, looting and death in several Democrat-run cities in mostly Democrat-led states has gotten out of hand. The radical Left, whose Antifa and BLM thugs are behind most of the orchestrated chaos, has been fanning the flames of violence and unrest in hopes of hurting President Trump's reelection chances.

But it's not working.

Key Democrat leaders have refused to condemn or even recognize the months-long problem, which began in May with peaceful protests that devolved into the nightly mayhem America suffers with now. The FAKE NEWS media has been complicit in the lawlessness by excusing, minimizing, ignoring or even celebrating the death and destruction.

Dozens have been killed, businesses have been ransacked, and livelihoods have been destroyed. Those on the Left who, finally, are beginning to talk about the violence are only doing so to help Democrat presidential nominee Joe Biden's poll numbers.

What does that tell you about them? Rioting, looting and murder were acceptable until "our guy" started tanking in the polls? It's disgusting AND infuriating.

Tonight, as a way to empower you to push back against the murder and mayhem, Grassfire is launching the national "STOP THE VIOLENCE!" Petition. You can take action, right now, to fight against the anarchy and lawlessness that have infected American cities and destroyed the lives and businesses of thousands who are helpless in its path.

Demand that Democrat Governors, Representatives and Senators -- as well as their Republican colleagues -- protect life, health and property by taking immediate, meaningful action. Click here or on the banner below to add your name to the national "STOP THE VIOLENCE!" Petition:

These riots are not President Trump's fault. He has offered the full assistance of the federal government to each state affected by this senseless violence. Yet, for the most part, the Democrat leaders in the worst-hit areas have refused the Commander-in-Chief's help!

Despite the Left's full-court-press to blame the death and destruction in the streets on "Trump's America," it's a charge that won't stick. The Left's silence for months -- as well as their open calls for violence since BEFORE the President took office -- will be remembered by voters.

If you want to see an end to the ongoing violence in Democrat-run cities and states, stand with other grassroots patriots. Click here or on the banner below to add your name to the national "STOP THE VIOLENCE!" Petition:

When the petition reaches 20,000 signers, Grassfire will hand-deliver your petition to House and Senate leaders on Capitol Hill. Thanks, in advance, for taking a stand.

P.S. Sign the national "STOP THE VIOLENCE!" petition to demand that Democrat Governors, Representatives and Senators -- as well as their Republican colleagues -- protect life, health and property by taking immediate, meaningful action. Add your name now!

I'm calling on local, state and nationally elected officials to "STOP THE VIOLENCE!" plaguing Americans in several Democrat-run cities in Democrat-led states. As a concerned taxpayer and citizen, I'm asking you to say "ENOUGH!" Please take immediate action to do what you can to end the ongoing riots that are destroying lives and livelihoods. As an independent-thinking, liberty-loving, patriotic American... (See more.)