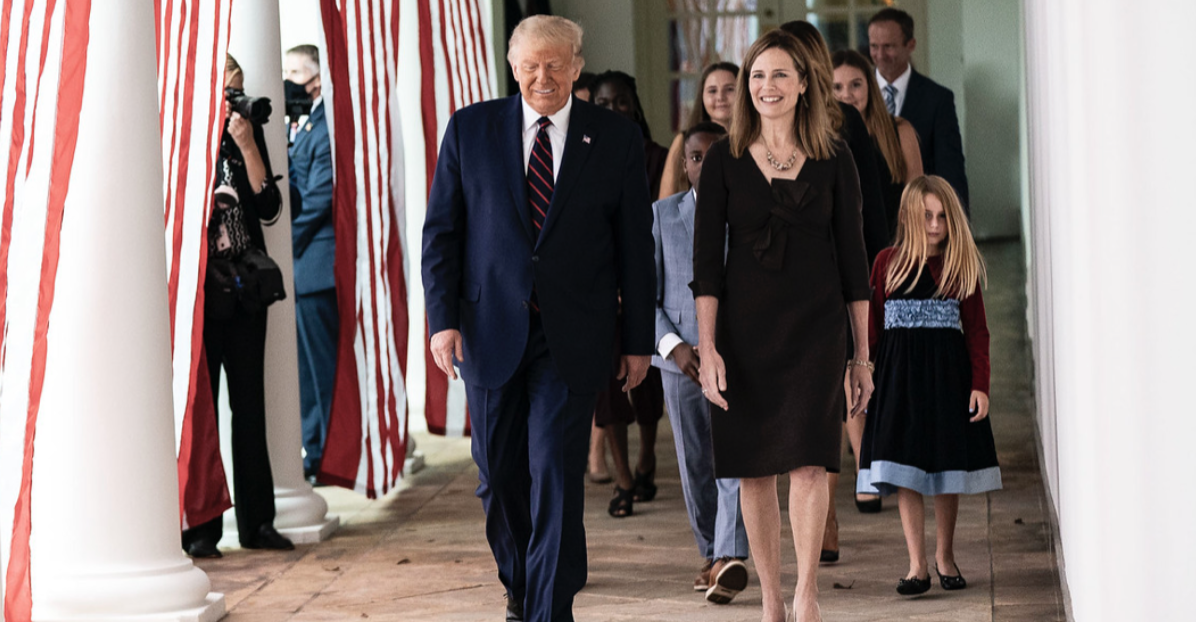 At this hour, the Senate Judiciary Committee hearing to confirm Judge Amy Coney Barrett as an Associate Justice to the Supreme Court is under way. On Capitol Hill this morning, Senators and the nominee will begin delivering their opening remarks.

Judge Barrett released her statement to the media yesterday. In it, she talks about her family, colleagues and mentors, including late Supreme Court Justice Antonin Scalia. Barrett wrote:

(I)t was the content of Justice Scalia's reasoning that shaped me. His judicial philosophy was straightforward: A judge must apply the law as written, not as the judge wishes it were. Sometimes that approach meant reaching results that he did not like. But as he put it in one of his best known opinions, that is what it means to say we have a government of laws, not of men. ...

I believe Americans of all backgrounds deserve an independent Supreme Court that interprets our Constitution and laws as they are written. And I believe I can serve my country by playing that role.

As a nominee who has already come under fire for her Catholic faith, she promises to "apply the law as written" and not based on her religious or moral preference. But that's not likely to be good enough for the Unhinged Left. Democrat Senators have been complaining about Barrett's nomination since before it became official.

Also, because of the threat of COVID-19, some Senators claimed it would be unsafe to hold a hearing to fulfill their constitutional duty to "advise and consent" on President Trump's nominee. But that argument doesn't hold water because the Senate has held more than 100 hearings since May -- with many lawmakers participating safely through video conferencing.

This week's hearing and the confirmation vote later this month is expected to seat a third Supreme Court Justice nominated by President Trump -- and that's driving liberals CRAZY! That's why Grassfire wants to empower you to make your voice heard THIS WEEK regarding the confirmation of Amy Coney Barrett.

By noon TODAY, Grassfire wants to begin the process of hand-delivering thousands of "Confirm Amy Now!" petitions to Senate Judiciary Committee Chairman Lindsey Graham (R-SC) in Washington, D.C. You can expand your impact today and immediately reach into Senate offices on Capitol Hill by faxing lawmakers your personal message. Call on Senators to "Confirm Amy Now!" Click here or on the banner below to immediately send up to 16 faxes for ONLY $15:

ATTENTION GRASSFIRE VIPS: GO HERE TO SEND THIS FAX AT AN 85% DISCOUNT!

(Not a monthly member? Go here to become a VIP and send this fax at an 85% discount.)
(Having trouble accessing your benefits? Go here.)

When President Trump announced Barrett's nomination last month, he asked Democrats "to provide Judge Barrett with the respectful and dignified hearing that she deserves and, frankly, that our country deserves. I urge lawmakers and members of the media to refrain from personal or partisan attacks." We'll see if that happens, starting today.

Go the extra mile by utilizing our "Level Two" option. It empowers you to reach every Republican Senator at a 37% DISCOUNT. Choose "Level Three" and urge EVERY member of the U.S. Senate to "Confirm Amy Coney Barrett!" at 50% OFF our regular price! To see a full list of fax targets and their contact information, click here.

Since former Senator Harry Reid invoked the so-called "nuclear option" in 2013, it now only takes a simple majority of Senators to confirm a federal judge -- that includes Supreme Court justices. Senate Republicans can afford to lose just three votes to successfully confirm Trump's nominee before November 3.

There's simply too much at stake to not confirm Amy Coney Barrett as the ninth Supreme Court Justice. So, Senators MUST hear from you to ensure America doesn't have a "split" court for the upcoming presidential election!

Take action to support President Trump's nominee so she can be seated on the nation's High Court BEFORE November 3. Click here to fax now. Thanks, in advance, for taking action today.