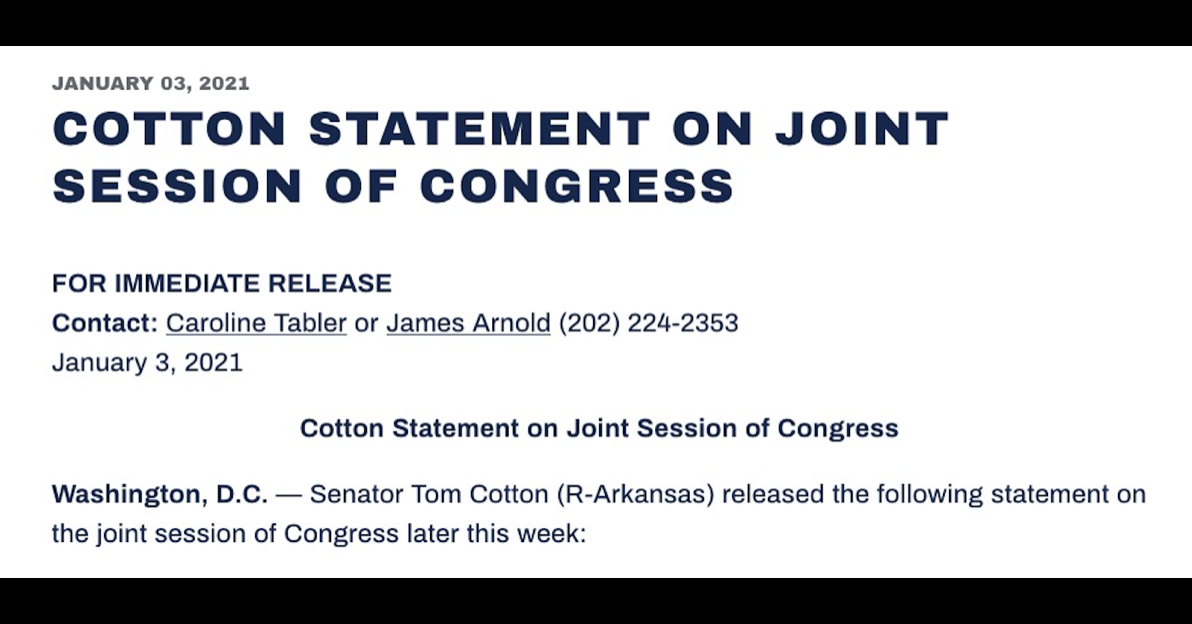 On Saturday, 11 GOP Senators joined Sen. Josh Hawley (R-MO) in pledging to challenge Joe Biden's Electoral College "victory" during a joint session of Congress this week. When that happened, millions of American patriots expected the announcement to embolden other Republicans in the Upper Chamber to stand with President Trump.

That hasn't happened yet. In fact, one GOP Senator -- who has long been described as a "Trump loyalist" -- shocked conservatives yesterday. In a statement, Sen. Tom Cotton (R-AR) said he will NOT "oppose the counting of certified electoral votes on January 6."

Instead, Cotton says he "support(s) a commission to study the last election and propose reforms to protect the integrity of our elections." Really? That's it?

Let's get this straight: A sitting, Republican U.S. Senator is refusing to fight against attempts by radical Democrats and the Unhinged Left to steal a presidential election. But everything will be O.K. as long as the do-nothing, weak-kneed GOP Senate "leadership" can hold hearings to talk about it??? That's outrageous and unacceptable!

Cotton erroneously claims, "If Congress purported to overturn the results of the Electoral College, it would not only exceed that power, but also establish unwise precedents." No, it wouldn't.

The Constitution gives Congress the power to certify election results. It's not a ceremonial duty. The House and Senate are meant to be the last line of defense against EXACTLY what's happening now!

(You can read the entire, shocking statement by clicking the link to it at the bottom of this email.)

Take immediate action to contact Sen. Cotton and every other GOP member of the United States Senate using Grassfire's newly updated "Stop The Steal!" FaxFire. Click here or on the banner below now to instantly send YOUR personalized message urging the junior senator from Arkansas, your Representative, your two Senators and every GOP Senator to stand with President Trump. That's a total of 55 faxes for just $30:

To help you fight back, Grassfire has re-launched our EMERGENCY "Stop The Steal!" FaxFire to include your two Senators, your Representative, and every GOP Senator -- including "turncoat" Sen. Tom Cotton! Even if you've sent faxes previously, this new FaxFire includes new letters to lawmakers and expanded congressional targets.

Earlier today, we updated all the records for the newly sworn-in Congress, so your message will reach EVERY key Senator and Rep -- up to 55 faxes in all -- for only $30. And to encourage every grassroots citizen to take action, we've discounted our LEVEL ONE FaxFire by more than 45%! Click here to fax now.

Your anger and/or concern over attempts to hijack the 2020 presidential election is 100% legitimate. America IS facing a constitutional crisis on January 6. That gives "We, the People" only two more days to fight for President Trump! Will you stand with America's Commander-in-Chief today?

If so, click here to immediately send your personalized, pro-Trump, "Stop the Steal!" messages to Sen. Tom Cotton and 51 other GOP Senators, along with your Representative and Senators, for just $30 -- as low as $.55 each. Or, go the "extra mile" with LEVEL TWO faxes and also reach the House Minority Leaders, House Minority Whip and ALL 44 members of the House Freedom Caucus for only $20 more. Click here to fax 101 lawmakers for $50.