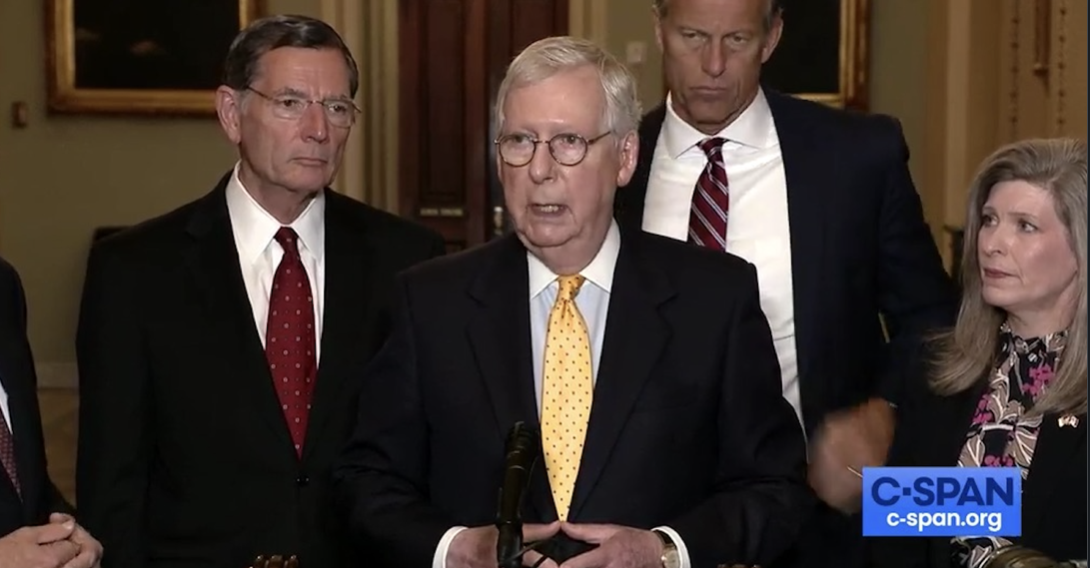 A Senate vote on the $1-trillion SPENDING SCAM is imminent! RINOs are on the verge of helping Democrats pass fake "infrastructure" legislation that would stick American taxpayers with the bill. Please see our urgent update below, or click here to take immediate action to "Stop The Spending Scam!"

Conservative Americans were blindsided 24 hours ago by Republican Senators who voted "Yes" on the Democrats' fake, $1-trillion "infrastructure" bill -- that only spends about half the money on ACTUAL infrastructure. Exactly one week earlier, EVERY Republican Senator refused to support the SPENDING SCAM because it had not even been written yet.

But yesterday, 17 Senate RINOs sided with Senate Minority Leader Schumer by voting "Yes" -- even though, as Sen. Tim Scott tweeted, "There's still no legislative text or explanation on how to pay for a $1T infrastructure plan." (Sen. Mike Rounds [R-SD] missed the vote but said he supports the SPENDING SCAM.)

Grassfire received two email updates from the office of Senate Minority "Leader" Mitch McConnell (R-KY) yesterday. Neither one mentioned a possible vote. When we reached out to our contact in McConnell's office this morning, that person confessed to being as surprised as we were. They called it "an unfortunate reality of [Senate Majority Leader Chuck Schumer] controlling what gets called up for floor action." 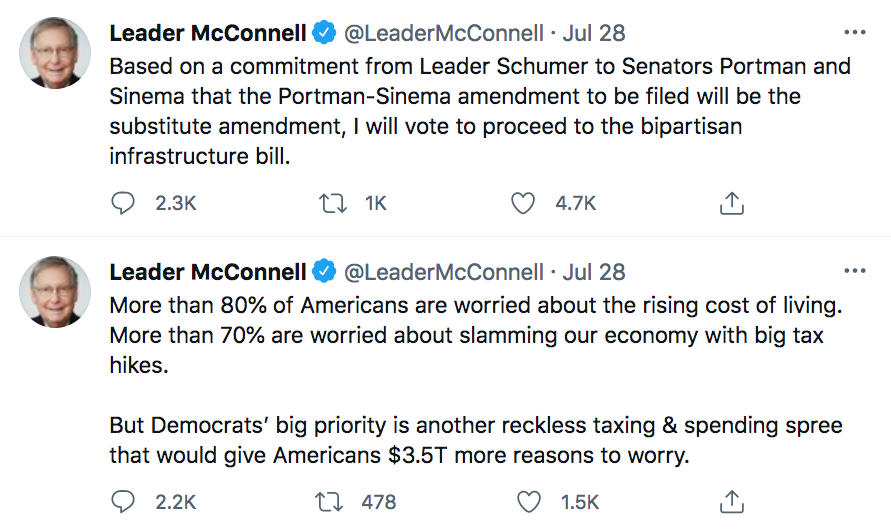 But Grassfire staff also was suprised by the Republican "leader's" Twitter feed yesterday. At 10:34 a.m., he posted:

More than 80% of Americans are worried about the rising cost of living. More than 70% are worried about slamming our economy with big tax hikes. But Democrats’ big priority is another reckless taxing & spending spree that would give Americans $3.5T more reasons to worry.

But then, seven hours later, McConnell proclaimed his support for the Democrats' $1-trillion SPENDING SCAM:

Based on a commitment from Leader Schumer to Senators Portman and Sinema that the Portman-Sinema amendment to be filed will be the substitute amendment, I will vote to proceed to the bipartisan infrastructure bill.

After seeing McConnell's opposing tweets, just hours apart, one Grassfire staffer was reminded of James 1:8, "A double minded man is unstable in all his ways." Yet, this is the man "leading" Republican Senators. If you want to push back against McConnell and his fellow Senate RINOs, here are two things you can do before tomorrow's vote:

+ + Action #1: Fax YOUR SENATORS and every GOP senator who stood with Democrats to support the SPENDING SCAM.

If you want your voice heard by those 18 RINOs before tomorrow's spending vote, go here to fax them and your two Senators (up to 20 faxes) for just $15. You also can reach every remaining Senate Republican and moderate Democrat Senators Joe Manchin of West Virgina, Kyrsten Sinema of Arizona and Jon Tester of Montana (up to 53 faxes) for only $30. Or fax all 100 U.S. Senators for the deeply discounted price of $50. Go here:

You can ring RINO phones, right now, in Washington, D.C. Call the 18 Republican Senators who are "on record" supporting the Democrats' SPENDING SCAM. Click here for their phone numbers:

To call YOUR two Senators or any other member of the Upper Chamber, click here to see a full list. McConnell's office told Grassfire this morning that a final vote on the $1-trillion spending bill is expected tomorrow (Friday). Make your voice heard by telling Senators to "Stop The Spending Scam!"

Schumer needs 60 votes for the Senate to pass his $1-trillion SPENDING SCAM. That means at least 10 Republicans will have to vote "Yes" for the bill to become law.

If GOP Senators cave in the next 24 hours, American taxpayers could be on the hook for a total of $4.5-trillion in SPENDING SCAMS passed by Democrats and the Biden regime before the end of the year. Click here to fax GOP Senators or here to call the 18 RINOS now! Thanks, in advance, for taking action today.

P.S. The clock is ticking on tomorrow's Senate vote, which could start an avalanche of trillion-dollar spending by Joe Biden and his fellow Democrats. American patriots have just hours left to stop it! Call or fax Senators now: