Sen. Graham: "Somebody needs to go to jail" 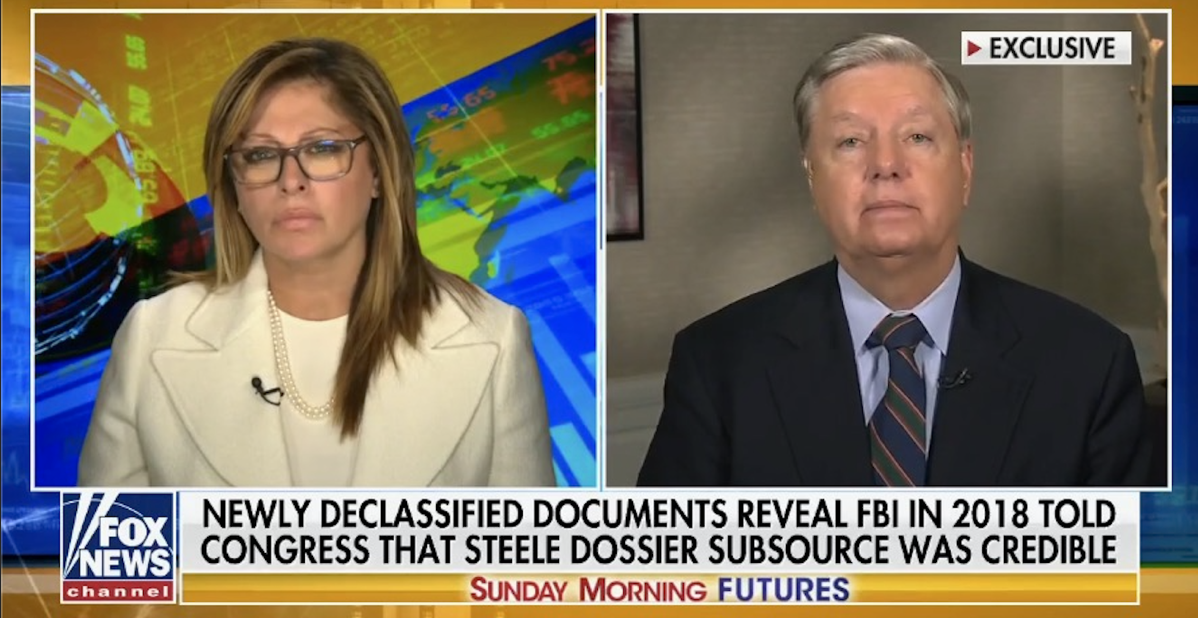 As Sen. Lindsey Graham (R-SC) continues to pull back the curtains on ObamaGate, he exposes more and more possible corruption in the former administration. Yesterday, the chairman of the powerful Senate Judiciary Committee released a declassified document that revealed the FBI lied to the Senate Intelligence Committee during a 2018 interview on the reliability of a key source in the Russia-hoax Witch Hunt against President Trump.

The senior senator for South Carolina insists the document proves the FBI intentionally misled Senators (and the American people) about the Steele dossier, which was used to get a FISA court warrant for the bureau to spy on the Trump campaign. Graham told FOX News' Maria Bartiromo yesterday:

"Somebody needs to go to jail for this. This is a second lie. This is a second crime. They lied to the FISA court. They got rebuked, the FBI did, in 2019 by the FISA court, putting in doubt all FISA applications ... a year before, they're lying to the Senate Intel Committee. It's just amazing the compounding of the lies. ... I’m gonna find out who did that briefing, and whoever it is, they’re in trouble."

Millions of Americans hope that Graham is sincere in his threats to bring any rogue members of the FBI to justice. But after months of over promising and under delivering on efforts to expose ObamaGate, many wonder if this is just more of the "Play Fight and Surrender" strategy that Republicans have perfected since Barack Obama took office in 2008. Graham has promised again and again and again "to get to the bottom" of the scandal. But what has he really accomplished?

Graham and the rest of the GOP need to work harder AND faster to EXPOSE ObamaGate! Republicans are the majority party in the Senate. So, as chairman of the Judiciary Committee, Graham has the power to issue subpoenas and investigate possible corruption in the Obama administration. But does he have the strength, courage and determination to follow through on his pledge to uncover what he called, in August 2019, "systematic corruption at the highest level of the Department of Justice and the FBI against President Trump and in favor of Hillary Clinton"?

Since June 3, which was "Day 1" of his "Oversight of the Crossfire Hurricane Investigation," Graham has called ONLY TWO WITNESSES TO TESTIFY! He released a "proposed subpoena list" of more than 50 Obama-era officials on June 4. But at this rate, it will take more than eight years to get through his list!

If you want Sen. Graham to intensify his investigation into possible corruption by members of the Obama administration, you can reach directly into his Capitol Hill office via Grassfire's "INVESTIGATE OBAMAGATE" FaxFire. For just $15, you can instantly send a personalized message to Sen. Graham, your two Senators, your Representative, Senate Majority Leader Mitch McConnell (R-KY) and EVERY Republican member of the Senate Judiciary Committee.

ObamaGate could be THE greatest political scandal in U.S. history -- all designed to undermine Candidate, President-elect AND President Trump! Graham has the power to subpoena witnesses but appears to be slow-walking the entire investigation. Will somebody -- anybody -- go to jail for the political "hit job" against our Commander-in-Chief?

P.S. American patriots need to rise up and call on the Republican-led Senate to take action by fully investigating this scandal. The time for empty promises is over. Grassroots Americans must push the GOP to ramp up the investigation into possible corruption within the Obama administration! Click here or on the banner below to demand the GOP stand with President Trump and EXPOSE ObamaGate: