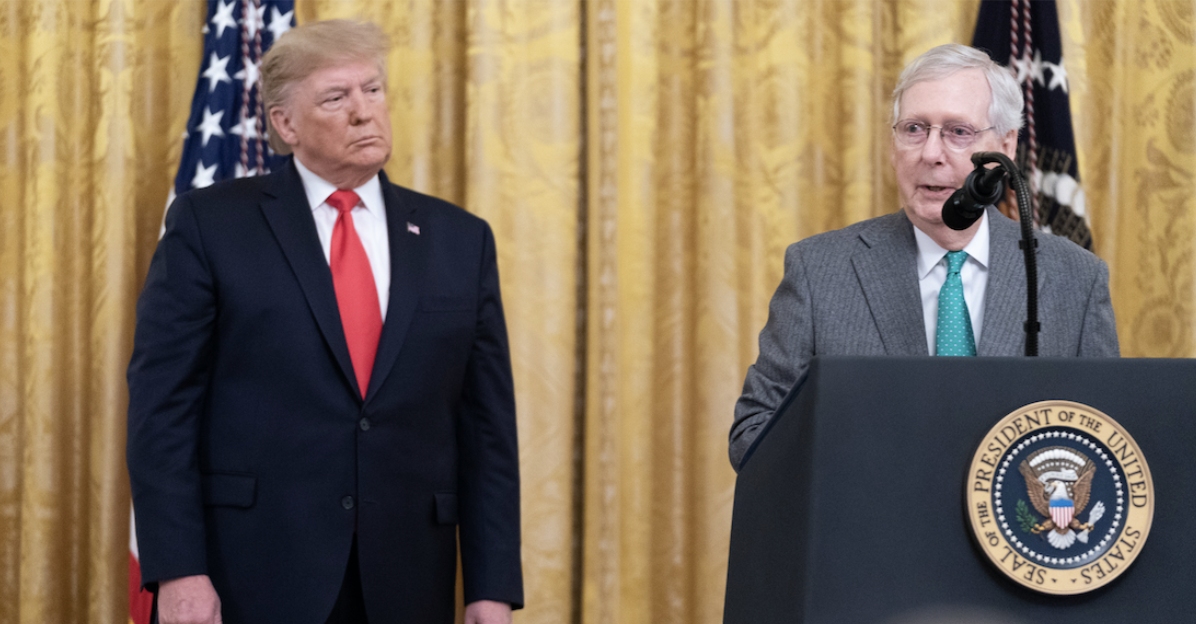 The House of Representatives is scheduled to vote THIS AFTERNOON to impeach the President! Yesterday, we told you THE PURGE of President Trump and the "America First" movement has begun. Now, reports from our nation's capital indicate Senate Minority Leader Mitch McConnell (R-KY) and other GOP "leaders" actually support Democrat impeachment efforts. Please see below and take immediate action to let your voice be heard on today's RUSH TO IMPEACH PRESIDENT TRUMP. --Grassfire

Vice President Mike Pence told House Speaker Nancy Pelosi (D-CA) yesterday that he and the Cabinet would not invoke the 25th amendment to remove the President from office. "I do not believe that such a course of action is in the best interest of our Nation or consistent with the Constitution," he stated. But some Republican "leaders" reportedly support Pelosi's impeachment efforts -- including Sen. Mitch McConnell.

According to The New York Times:

Senator Mitch McConnell of Kentucky, the Republican leader, has told associates that he believes President Trump committed impeachable offenses and that he is pleased that Democrats are moving to impeach him, believing that it will make it easier to purge him from the party, according to people familiar with his thinking. The House is voting on Wednesday to formally charge Mr. Trump with inciting violence against the country. (Emphasis ours)

The 74 million Americans who voted for President Trump two months ago can only hope this is FAKE NEWS. But the third-ranking Republican in the House, Rep. Liz Cheney (R-WY), said in a statement yesterday, "I will vote to impeach the President."

The question now is, "How many other RINOs in Congress will support this ridiculous effort to purge the President?" The Times reports: "The House is expected to pass the single charge on Wednesday, and a senior administration official said the White House expects about two dozen Republicans to support it."

This could be the end of the Republican Party. Pro-Trump Americans have come to expect constant attacks from the Left. They're also familiar with weak-kneed GOP Senators and Representatives who continually play-fight and surrender against radical Democrats and the Unhinged Left. What tens of millions of conservatives are not used to, nor are they likely to accept, is direct attacks from the GOP. That's what America could see TODAY on Capitol Hill.

President Trump and the movement to save America that he represents are such a fundamental threat to the oligarchs who rule that Trump must be PURGED.

That's what's actually happening right now. The effort by Speaker Pelosi, Senate Majority Leader Chuck Schumer (D-NY) and others to impeach President Trump again -- TODAY -- is designed to "tar and feather" the President so badly that he can never run again -- as a practical or perhaps a legal matter. They don't want to just defeat President Trump. They want to bury him and the "America First" political revolution that he started.

But that's been their goal all along. From even before his inauguration, they worked to undermine and impeach President Trump. There were violent riots on his Inauguration Day. They pushed a Russia-conspiracy hoax for three years. Then, when President Trump touched the "third rail" of Joe Biden's open corruption in Ukraine, they impeached him. And now, they want him impeached AND purged.

To help citizens fight back against these 11th-hour attacks against the President, Grassfire has launched a "Stop The Purge!" FAXFIRE that will send your personal message about the impeachment attack directly to leaders in Congress. If you're outraged by this impeachment effort and the overall PURGE of patriotic Americans, then go here to utilize our FaxFire to let your voice be heard:

We just updated all the records for the newly sworn-in Congress, so your message will reach EVERY targeted Rep and Senator -- up to 50 faxes in all. And to encourage every grassroots citizen to take action, we've discounted our LEVEL ONE FaxFire by more than 40%! Go the "extra mile" and choose LEVEL TWO of the "Stop The Purge!" FaxFire. You'll also reach 50 key GOP conservatives in the House of Representatives. That's a total of up to 100 faxes for just $50 -- a 50% discount! Click here now.

+ + Patriotic Americans Must Stand With The President TODAY!

Today's actions aren't just about purging President Trump. This is about purging YOU AND OTHER CONSERVATIVES -- anyone who dares to stand for the Constitution and stand for liberty and stand against the socialist/Marxist "great reset" of society that's under way. This is just the beginning if grassroots Americans don't take action to STOP THE PURGE right now -- starting with this outrageous effort to impeach President Trump.

That's why what's happening in Congress today and the rest of this week is so critical. If pro-Trump Americans sit by silently and do nothing, while they tar and feather the President, then the PURGE will never stop. They will complete their PURGE of conservative thought from social media. They will PURGE Trump supporters from having any voice on TV and radio. They will PURGE conservatives from being able to even run for office. They will PURGE you (and Americans like you) in every possible way.

So today, grassroots patriots must stand to STOP THE PURGE of President Trump! Radical Democrats, the Unhinged Left, the GOP Establishment, NeverTrump RINOs, the Deep State, the D.C. Swamp, FAKE NEWS and Hollywood's "elite" all want to PURGE the Commander-in-Chief, and then PURGE you. Click here to let your voice be heard on today's radical impeachment vote!

P.S. The results of this week's "Impeach Trump?" QuickPoll reveal that an overwhelming majority of Grassfire team members DO NOT SUPPORT removing the President from office. We received more than 10,000 votes over the past two days, and 95% of respondents said the President should not be impeached. If you agree, click here or on the banner below now to send your "Stop The Purge!" faxes IMMEDIATELY to Capitol Hill:

McConnell is said to be pleased about impeachment, believing it will be easier to purge Trump from the G.O.P. (New York Times)

Cheney: I Will Vote To Impeach The President (Mailchimp)