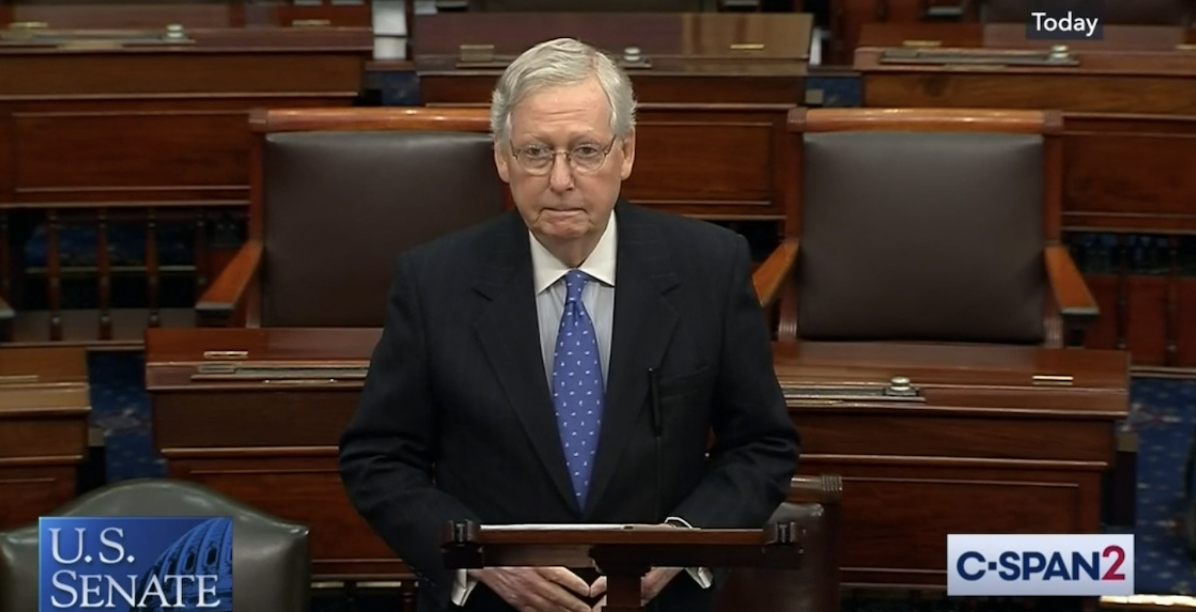 Breitbart News is reporting that GOP Senators are "firing warning shots... suggesting that they will no longer be able to support Senate Minority Leader Mitch McConnell (R-KY) as leader if he votes to convict the former president." Several Republicans in the "Upper Chamber" have openly criticized holding an impeachment trial for President Trump now that he's a private citizen.

The Dallas Morning News says Sen. John Cornyn (R-TX) has called the trial "a bad idea," and Sen. Ted Cruz (R-TX) said this week that "Impeaching and trying a president after he has left office is petty, vindictive, mean spirited, and divisive." Also from Breitbart, Sen. Ron Johnson (R-WI) "would not be able to support McConnell as leader if the Kentucky Republican voted to convict Trump." Johnson reportedly said, "I don't even think we should be having a trial."

But, based upon comments made on the Senate floor this week, that's NOT what the Senate Minority "Leader" thinks. He appeared to line up with House Democrats who impeached President Trump (again) ten days ago for "incitement of insurrection" and "willfully inciting violence against the government of the United States." On Tuesday, McConnell insisted:

"The mob [that breached the Capitol] was fed lies. They were provoked by the president and other powerful people. ... We certified the people’s clear choice for their 46th president."

But according to a FOX News poll conducted in early December, 77% of Trump voters think Biden and the Democrats stole the 2020 election. If that national survey of American voters is correct, then tens of millions of Americans disagree with McConnell and think the wrong man was inaugurated on Wednesday.

Democrats are moving forward with a trial and need only 17 of the 50 GOP Senators to vote in favor of convicting President Trump to impeach him. Most Republicans haven't weighed in yet on how they'd vote. Some pro-Trump Senators claim that even holding a trial is unconstitutional. But that didn't stop Senate Minority "Leader" Mitch McConnell (R-KY) this week from proposing a timeline for an impeachment trial in the Upper Chamber.

To help you fight back against this latest attack on Donald Trump, Grassfire has launched the "Reject The Impeachment Witch Hunt!" FaxFire. Take immediate action by instantly faxing ALL 50 Republican Senators, demanding they denounce a Senate trial and vote against impeaching the President!

Grassfire is urging our team members to start faxing Senators now! Our "Reject The Impeachment Witch Hunt!" FaxFire can reach every GOP Senator with your personalized message for only $30. Click here or on the banner below to immediately fax 50 Republicans in the "Upper Chamber" for just $.60 each:

Again, your personalized message will reach EVERY Republican Senator -- up to 50 faxes in all -- for just $30. To encourage team members to take action, we've discounted our LEVEL ONE FaxFire by 40%!

Click here to immediately demand that Senators "Reject The Impeachment Witch Hunt!" against President Trump. To see a complete list of FaxFire targets and their contact information, click here. Thanks, in advance, for taking action today.

P.S. This is a CRITICAL ALERT! Grassfire is urging every grassroots patriot to make their voices heard by demanding Senators reject this witch-hunt trial and vote against impeaching President Trump. Schedule your personalized faxes for immediate delivery to Senate offices now! Click here or on the banner below to instantly send 50 "Reject The Impeachment Witch Hunt" faxes to GOP Senators on Capitol Hill for just $30: