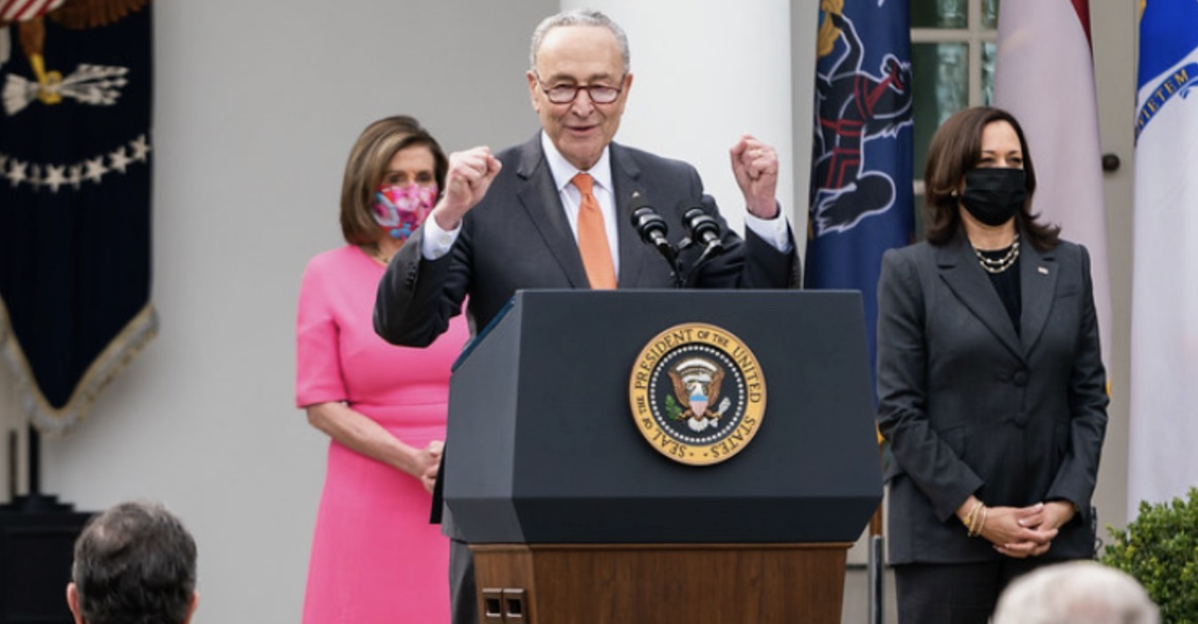 Large, secretive, "dark money groups" are, reportedly, funding Senate Minority Leader Chuck Schumer's (D-NY) schemes to kill the 60-vote filibuster and steal future elections. According to The Epoch Times, a "political-nonprofit finance expert" insists that a "shadowy consulting firm" is backing the partisan power-grab by Schumer and other radical Democrats.

Fix Our Senate is a coalition of 70 liberal-advocacy groups "fighting to eliminate the filibuster and fix the Senate." That way, Joe Biden can unleash full-blown socialism on America by passing his radical, far-Left agenda with a simple majority vote in the Upper Chamber. The Epoch Times reports:

"Fix Our Senate may present itself as a standalone, grassroots activist group, but it's actually a front for the Sixteen Thirty Fund, itself part of a $1.7 billion left-wing 'dark-money pop-up' empire. ... We call these fronts 'pop-ups' because they're websites which pop into existence, run attack campaigns, and disappear in an instant and almost never reveal their connection(s).

In a letter released on Monday that Senate Minority Leader Mitch McConnell's (R-KY) office called "somewhat odd & intimidating," Schumer threatened to nuke the filibuster if Republicans don't "change course and work with" Democrats. He gave the GOP a January 17 deadline to "debate and consider changes to Senate rules."

The Wall Street Journal says, by eliminating the cloture rule that requires 60 votes to end debate and vote on legislation, Schumer is trying to "blow up the Senate." That's why the GOP is pushing back. Here's more from The Epoch Times:

"Republicans argue the reforms — the John R. Lewis Voting Rights Advancement Act and the Freedom to Vote Act — severely limit or eliminate entirely the use of photo IDs and related ballot security measures, and require that all proposed changes to state election laws have prior Department of Justice (DOJ) approval.

"Measures such as strengthening voter identification requirements are highly popular with the public, with recent surveys by Rasmussen, Monmouth, Pew, and AP-NORC finding 72 to 80 percent support for requiring photo IDs to vote."

We're empowering our team members to PUSH BACK AGAINST THE PARTISAN POWER-GRAB by radical Democrats. Click here or on the banner below now to sign the national petition to "PROTECT OUR ELECTIONS!":

McConnell has dubbed the Democrats' attempts to hijack future elections the "Big Lie." His office staff has even renamed the "Freedom to Vote Act," calling it the "Freedom to Cheat Act." Sen. Ted Cruz (R-TX) labeled the legislation "The Corrupt Politicians' Act."

Republican Senators need to know that "America First" patriots stand with them in the fight the "Freedom to Cheat Act"! TOMORROW MORNING, Grassfire will mobilize our representatives to deliver "PROTECT OUR ELECTIONS!" petitions on Capitol Hill.

If you want us to represent you in the halls of Congress, you MUST click here to sign now. You CAN take action to push back against the "The Corrupt Politicians' Act." Thanks, in advance, for making your voice heard today.

P.S. If you missed this morning's ELECTION STEAL update, you can read it here. Find out why Democrats are using the one-year anniversary of the Capitol breach to force-feed the American people a tsunami of LIES. Click here or on the banner below to take immediate action to PROTECT OUR ELECTIONS by signing the national petition now: