Please share this with your friends by forwarding this email. Invite them to get involved in the grassroots movement to FREE AMERICA NOW! -- Steve

Then they demanded her name "so we can document" this "because you are violating a state order."

This isn't China... or the former Soviet Union. THIS IS AMERICA! IN THE HEARTLAND! Wisconsin of all places!

You've got to see the video: 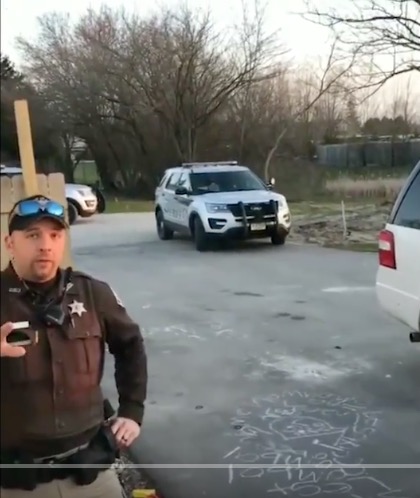 + + A crucial Tipping Point for America...

I believe we've reached a crucial tipping point. On one hand, citizens across the country are rising up and saying FREE AMERICA NOW. On the other hand, out-of-control government officials are clamping down even harder -- while the unemployment numbers just pushed past 30 MILLION!

We simply can't sit by silently.

Here's what I'm asking you to do.

There are dozens of grassroots groups across the country who are taking a stand. We just started a FREE AMERICA NOW Facebook page to rally citizens and serve as a hub of information.

We want to network thousands and then tens of thousands of citizens. If you haven't done so already (thousands have!), click here or on the banner below to sign the national "Get America Working Again!" Petition:

The torch of liberty has been handed to us by prior generations, dating all the way back to the first pioneers who risked their lives to come to these shores and carve out American liberty with their sweat and blood.

Every generation has had its moment.

THIS IS OUR MOMENT!