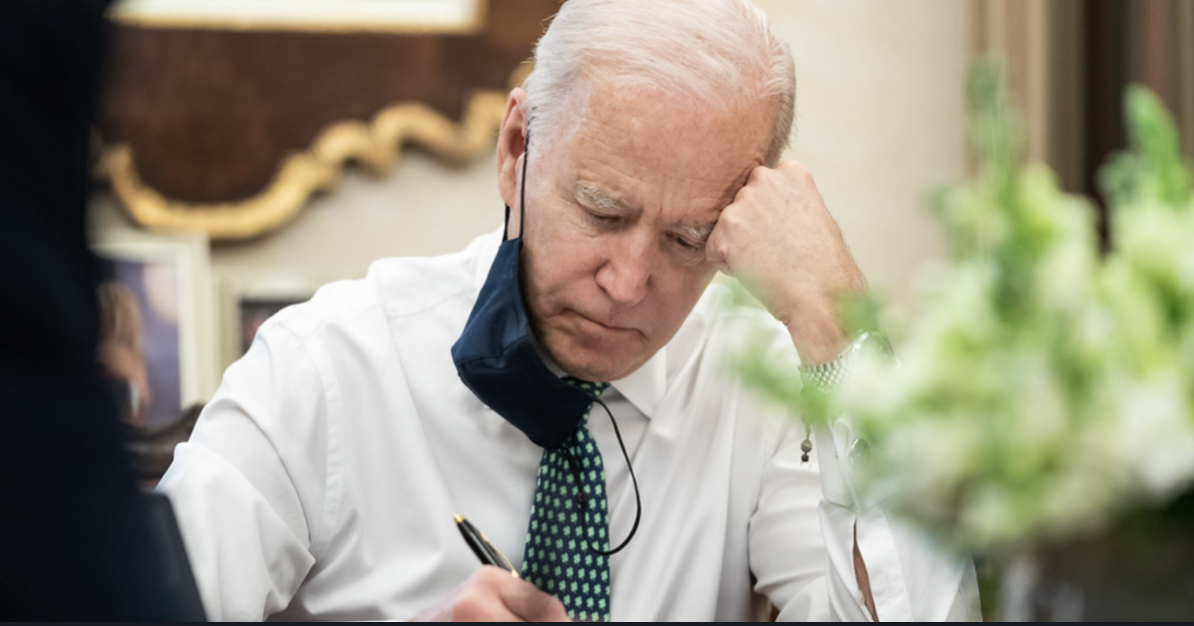 Speaker Nancy Pelosi (D-CA) called the House back into session yesterday, cutting short the chamber's August recess. But why? Did she want Representatives to address the chaos in Afghanistan, where thousands of Americans are still under Taliban control?

Pelosi reconvened the House to "pimp" nearly $5 trillion in Democrat wish-list spending through Congress and fully fund Joe Biden's radical, extreme agenda. The Speaker celebrated a House vote earlier today that took a giant step forward in passing both a $1.2-trillion fake, "infrastructure" bill and $3.5 trillion in progressive, pork spending that will usher in an era of Big Government that Americans have never seen before!

The California Democrat said on the chamber floor this afternoon: "Today is a great day of pride for our country and for Democrats." Meanwhile, Islamic terrorists are threatening the lives of Americans stranded on foreign soil. Talk about being tone deaf! ("Read the room, Nancy.")

Pelosi and most of her fellow Democrats don't seem concerned -- at all -- about the Afghanistan crisis. It's almost as if they're using it as "cover" to ram through the biggest expansion of the federal government in U.S. history.

The Speaker has been twisting arms and bullying lawmakers in D.C., working to shove our nation off a fiscal cliff into full-blown socialism. A Twitter post by Rep. August Pfluger (R-TX) sums it up perfectly. The U.S. Air Force Colonel (Res.) wrote yesterday:

Nothing to see here, just Nancy Pelosi calling the US House back in to discuss $5 TRILLION in partisan spending — but no hearings scheduled on the ongoing situation in Afghanistan. Washington's priorities are backwards.

Today, Pfluger blasted Pelosi AND Joe Biden, who was five hours late for a press conference that was supposed to focus on Afghanistan. Instead, the so-called "Commander-in-Chief" promoted his economic agenda. "This is not leadership," the Texas Republican tweeted.

We want to empower you to call on GOP Reps to reject this wasteful, pork-filled legislation and focus on evacuation efforts in Afghanistan. Take action now to protest these obscene, $1.2 trillion and $3.5 trillion cash-grabs for Democrat special interests!

Click here or on the banner below now to sign the "Stop The Spending Scam!" national petition:

Long before the $1.2 trillion "infrastructure" bill passed the Senate earlier this month, Grassfire warned that Democrats were tying that legislation to a $3.5 trillion wish-list of "human infrastructure" spending that could pass with ZERO Republican support. That's still the plan for radical, far-left lawmakers, regardless of the threat to American lives in Afghanistan.

Demand House Republicans "Stop The Spending Scam!" and push back against America's slide into socialism! Click here to add your name to the national petition now. We'll deliver your petition to GOP leaders when we reach 20,000 signatures. Thanks, in advance, for making your voice heard today.

P.S. Pelosi and radical House Democrats don't just want to turn America socialist -- they want to guarantee it stays that way. The Speaker has attached a "voting rights" bill to the SPENDING SCAM legislation that, if passed, could ensure the GOP never wins another federal election. Don't let Democrats push America into full-blown socialism! Go here now to sign the national petition and make your voice heard: